Why hasn't Doug Ford instituted a ban on evictions to save small businesses?

Jon Shell: When the federal government first announced its intention to provide the CECRA rent relief program on Apr. 16, it provided much needed hope. But that hope has faded. 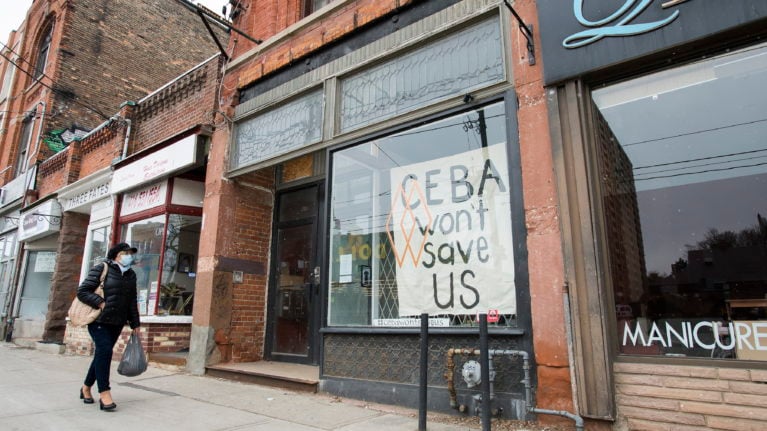 Jon Shell is managing director of Social Capital Partners. He is also the co-founder of SaveSmallBusiness.ca, a grassroots coalition of small businesses formed on Mar. 22, 2020, to protect small business during the COVID-19 crisis.

Last Friday, the day before many Ontario small businesses would be exposed to eviction for non-payment of May rent, Premier Doug Ford begged commercial landlords for leniency. “The tenants, my heart breaks for them; give them a break,” Ford said. “To all the big landlords out there: ‘have a heart.’” Then, on Tuesday, he came out even stronger, threatening to come down on landlords “like they’ve never seen before.”

They were strange comments from someone with the power to stop evictions. For local business owners, it was frustrating, watching a politician choose rhetoric over action once again. Doug Ford, a business owner himself, is supposed to have their backs.

In Save Small Business’s recent survey of over 2,000 business owners, 66 per cent said rent relief was the most important government support, with the CEBA loan and wage subsidies far behind. Fifty-two per cent said that without rent relief, their business would not survive.

MORE: Canada’s economy may never return to what it once was

So when the federal government first announced its intention to provide Canada Emergency Commercial Rent Assistance (CECRA) on Apr. 16, it provided much needed hope. But hope has faded, even though the program is finally launching next week.

Designed to provide landlords with 75 per cent of rent for three months if they choose to participate, every indication is that few landlords will put their hands up. In our survey, only 16.9 per cent of Ontario business owners who qualified for CECRA said that their landlords were likely to apply.

To casual observers, journalists and politicians, this doesn’t make any sense. Isn’t it a better deal to get 75 per cent of rent owed instead of nothing? (Especially since 50 per cent of small businesses say they won’t be able to make June rent.)

That sentiment doesn’t acknowledge the true position small businesses are in right now, or the real choice landlords face.

MORE: How to save the economy

Sometimes it’s in the landlord’s best interest to evict, even with no other tenant lined up. Certain properties are worth more as development opportunities than as rentals. Some locations have increased in value so much that it’s worth leaving them empty to secure a higher rent once the economy recovers. The pandemic is giving these landlords a way out of leases at the expense of small businesses.

More commonly, landlords are using the threat of eviction to secure better deals than CECRA will offer. At first, they’ll continue to demand full payment of rent, hoping the tenant can find it somewhere. Many have recommended that their small business tenants take on government loans. If that doesn’t work and the tenant still can’t pay, they can propose a deferral arrangement, where the tenant pays 100 per cent of rent over time, often with interest. Many such deals have been signed in the last two months.

Small businesses have no choice but to take the best offer they get from their landlords because their negotiating position is weak. Tenants have often put hundreds of thousands of dollars into equipment and fixtures, and have personally guaranteed their leases (meaning they’ve sometimes signed off personal assets—including their homes—as collateral for their commercial lease). If they’re evicted, they lose everything. This gives the landlords the upper hand.

The point here is that many landlords are acting in their best interests by not participating in CECRA. That will continue as long as there is no moratorium on evictions.

As a business owner, Doug Ford knows all this, which is why the small business community is left feeling betrayed by his words and surprised by his lack of action. In his press conference on May 15, he referred to “a lot of legal issues” as a reason not to introduce a moratorium, but that excuse rings hollow, as both New Brunswick and Nova Scotia have commercial eviction bans in place.

Premier Ford could also look to New South Wales, the “Ontario” of Australia, led by a conservative premier and with a similar economy, population and political system. Like Ontario, New South Wales has jurisdiction over property, and it instituted a six-month ban on commercial evictions on Mar. 29. They also established a mandatory code of conduct for landlord-tenant negotiations, setting out how much rent tenants were expected to pay based on how hard their revenue had been affected by the pandemic. Landlords that don’t comply will have to explain themselves to a mediator. These actions have resulted in a fair sharing of burden between landlords and small businesses.

A similar set of actions, combined with the CECRA rent-relief program, would save thousands of small businesses across Ontario at no additional cost to the provincial government.

Earlier this week, Champs Academy, a family-run martial arts centre in Barrie, was one of the many Ontario businesses to be evicted for non-payment of rent. As a non-essential business, they were forced to close to protect their community from the pandemic. And now, after 16 years in business, their livelihood has disappeared. Businesses like this shouldn’t have to depend on their landlords “having a heart” in order to survive.

A commercial eviction ban makes sense economically, politically and morally. Standing up for “the little guy” to “vicious landlords,” to use Ford’s own words, would be the most on-brand thing Ontario’s premier could do. So why hasn’t he done it?