Scott Gilmore: It's been a pretty good ride and the authors of our long-delayed demise will likely be two of the whitest and most mediocre of us all 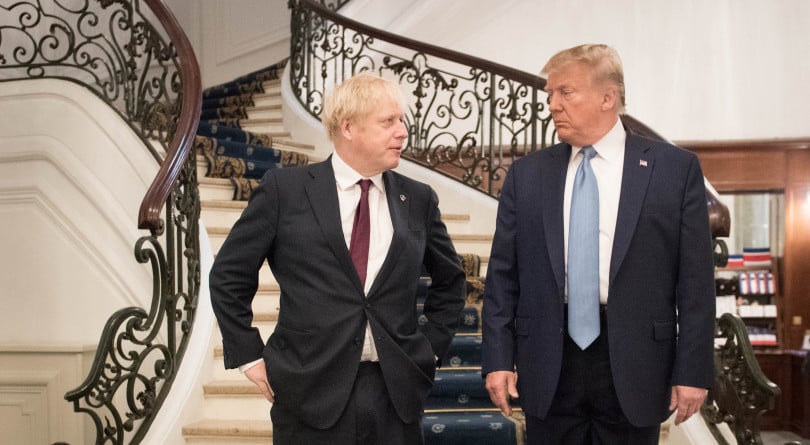 Trump and Johnson arrive for a bilateral meeting during the G7 summit on Aug. 25, 2019, in Biarritz, France (Stefan Rousseau/Getty Images)

You don’t truly appreciate something until it’s about to disappear. And, I confess, I didn’t fully grasp how absolutely wonderful it has been to be a mediocre white man, until I recently realized our time is coming to a close.

It’s been a pretty good ride so far. Arguably, being a white male has been the bee’s knees for about 2,000 years. We have been giving all the orders, taking all the credit, and pocketing all the money since Caesar told Cleopatra to pipe down. We wrote the history books and we built the empires (well, other people did the actual building, but we oversaw a lot of it from our sedan chairs). We drafted all the laws, and made sure to always stack the cards in our favour. And, for a truly impressive long time, we were able to keep all the fun to ourselves.

It has also been fairly good for me, personally. I’ve managed to cake walk my way from job to job, confidently pretending to know what I was doing, never hesitating to take on any new task—no matter how unqualified. I always put my hand up, never paused to think, inevitably failing upward, relentlessly sharing my opinion in the board room, bedroom and chat room. Hell, they even gave me a weekly column so I could explain from coast to coast how I am right and you are wrong.

All along the way, in every job I did, I was vaguely aware of colleagues who were smarter, faster or better than me. I’m pretty sure I was never the smartest guy in the room. I know I was never the last person in the office. Virtually every single woman I have ever worked with carried more weight than I did. And my immigrant colleagues have always hustled circles around me. But, when it came time for promotions, the mediocre white men above looked at me and saw a younger version of themselves: self-assured, privileged, someone who understood the value of the status quo and was willing to do the bare minimum to protect it—and rewarded me accordingly.

I say this in complete sincerity: Living in a world that was almost entirely designed, built and run specifically by people like you for people like you is even better than you realize. The movies are made for us, doctors are trained for us, the cops respect us and the courts protect us.

Honestly, if you haven’t lived as a mediocre white man, then it is difficult for me to properly explain what this sense of safety, entitlement, power and confidence feels like. Try to imagine all the human misery that has accumulated over centuries of sexism, racism, cronyism and violence. It’s like the exact opposite of that.

READ MORE: The face of women in the age of Donald Trump

Sadly, all good things (for us anyway), inevitably come to an end. But a multi-millennium run is nothing to thumb your nose at. And, what an ending it is turning out to be. In fact, the last chapter in The Age of the Mediocre White Man is proving to be the most spectacular one of all.

In Canada, with one of the most ethnically diverse populations in the world and a female majority, the two whitest men you have ever seen are naturally the only contenders for Prime Minister. Their qualifications? One was the son of another Prime Minister. The other has literally no qualifications—he went straight from school to politics (because he understood the defining truth of the mediocre white man: experience be damned—we should be in charge).

Down south, an inept real estate swindler from Queens blustered his way right past one of the most accomplished women in American history and right into the White House, where he has proceeded to screw up literally every single thing even remotely related to the Presidency, all while managing to squeeze in 213 days of golf.

Across the water, the most bumbling, unethical and ill-prepared Prime Minister in the history of the United Kingdom was able to push aside his female predecessor, before swiftly destroying his own Conservative Party. And, parliament be damned, he is now intent on laying his clammy pink hands on the body of Lady Britannia herself, to yank her violently out of Europe before doing God knows what with her on his side of the Channel.

Ironically, these last two men, the whitest and most mediocre of us all, will likely be the very authors of our long-delayed demise. The global wreckage of their alliance-breaking, dictator-fondling, climate-denying antics has to be the last straw. After this, how could anyone think we should be in charge of anything anymore, or even allowed in the room? Assuming the women of the world have any sense (and it’s self-evident they have most of it) right now they must be debating if universal suffrage was really a wise move after all—the male franchise having proven such a very dangerous thing.

But that’s tomorrow. Today, I’m doing fine. Blessed with the unfaltering confidence of the mediocre white man, I’m sure I’ll land on my feet come what may. And, in the meantime, I take a great measure of pleasure knowing I was able to grab on to the very tail end of this age. It’s been wonderful.