The 2019 election is a conflict between the 'somewheres' and 'anywheres'

Frank Graves and Michael Valpy: Ahead of the Oct. 21 election we see a divided Canada; a war pitting Canadians of social-conservative views against those with more progressive views 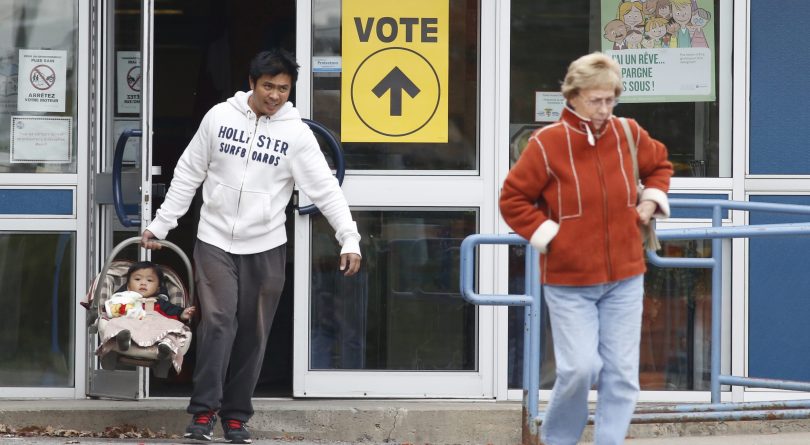 Voters leave the Ecole Marius-Barbeau polling station, in Ottawa, after casting their votes in the Canadian federal election on Oct. 19, 2015. (CP/ Patrick Doyle)

With election day just a week away, what do you say about Canadian democracy? Use the sad-faced emoji. The message of the lockjaw polls is that Canadians are so deeply politically divided they will be angry with the Oct. 21 vote whatever the results—that is, for those who are motivated to vote.

Neither Justin Trudeau’s party-time play in brownface nor the SNC-Lavalin affair nor the post-truth populism of Andrew Scheer’s fly-by career as an insurance broker is going to affect the outcome.

What is important to note is the fractures in the country that aren’t going to be mended by what anyone says or does over the next few days.

According to EKOS polls, the vote in Alberta and Saskatchewan—where residents face a stranded asset that will lose value in 10 years—will be massively Conservative, and the vote in Ontario, Quebec and Atlantic Canada will tilt substantially Liberal. The last time the country experienced such a massive geographical divide was 40 years ago when Pierre, the elder Trudeau, was Prime Minister.

There’s also immense splintering of Canadians this election by social class, levels of education and gender, although not so much by age.

Millennials are now the largest bloc of voters—bigger than the baby boomers—and they don’t like anybody very much. They’re spreading their support more or less equally between Liberals and Conservatives. They’re better represented with the New Democrats and Greens but those parties are forecast to pull a much smaller share of the vote.

Will this bloc significantly influence the election’s outcome? Millennials came out in big numbers in the 2015 election because they liked current Liberal leader Justin Trudeau and decidedly didn’t like Conservative then-Prime Minister Stephen Harper. But this time their voting mindset is unpredictable and they’re quite likely to stay at home. Like the rest of the electorate, they feel discouraged. Hope and fear motivate people to vote; discouraged people are motivated to stay home.

The voting intentions of Generation Z eligible voters—those born between the mid-1990s and 2000—haven’t been measured.

MORE: How accurate are Canadian polls?

Overall, if only men voted on Oct. 21, there would be a massive Conservative majority; if only women voted there would be a massive Liberal majority. Self-identifying working-class Canadians have moved in huge numbers from the Liberals to the Conservatives, as have voters without a university education. (The NDP and Greens do well across all classes except with Canadians identifying as upper class.) The Conservative-Liberal vote is also sharply polarized on issues such as immigration, many economic measures and the climate crisis (or whatever those who don’t think it’s a crisis want to call it).

One footnote: EKOS research finds that supporters of Maxime Bernier’s People’s Party of Canada are not just old white guys. The party does better with millennials than with seniors, and has a bigger percentage of supporters with university degrees than the Conservatives do.

So the greatest achievement of the election will be to leave a fragmented country with an elusive or absent centre ground. The polls still point to a Liberal minority government but that’s hardly papering over Canadians’ divisions.

What’s going on then?

The election has presented itself as both a class war and a vision war: a class war because ordered populism (and that’s what we Canadians, like the Americans and British, are experiencing here) has shown itself to be a magnet for primarily less-educated male Canadians who feel economically threatened, and a vision war pitting Canadians of social-conservative views against those with more progressive views (what has been termed a conflict between “somewheres and anywheres”); between those whose identities are rooted in a place and embrace family values versus those who have educational success and embrace social and geographical mobility.

Adherents of ordered populism have a declining trust in public institutions and a declining sense of middle-class membership. They feel beset by wage stagnation and by the hyper-concentration of wealth among the top one per cent of society. They see rising external threats to the country’s security. And they’re searching for a strong leader to guide the country into a safe and prosperous haven.

Looking at those indices, it becomes easy to see why Conservative leader Andrew Scheer’s performance in the English-language debate has been given good marks.

He came out of the starting gate as “the strong man,” calling Mr. Trudeau a fraud and a phoney. He aggressively defended his party’s platform promise to cut billions of dollars out of foreign aid, pledging to stop giving money to people who don’t particularly like Canada and spending it at home. The day after the debate, he appeared at one of the irregular border crossings for refugee claimants between Quebec and New York State, promising to tighten entry to the country and raising the threat to Canadian security from the same Latin-American criminal gang that figures in the speeches of U.S. President Donald Trump.

Thus while Mr. Scheer and his advisers have shown a unique understanding of what drives populism and how to make use of it, Mr. Trudeau and his team—along with the New Democrats and Greens—have appeared tone-deaf, misreading the anger that has been driving Canadians into the Conservative camp and offering moderate policy proposals that won’t ameliorate their anger, their incredible sense of dissatisfaction with how the country is being governed, and their bleak discontent.

The next federal government will have to find a middle ground between two irremediable Canadas.

That middle ground exists, and identifying it is not difficult: What frightens the somewheres and the anywheres alike is the spectre of the end of progress, of continued and growing inequality, of a profound pessimism by 90 per cent of Canadians about their future.

Resolving the issue will need bold policies beyond the vague bromides offered in this election campaign. Churchillian “fight-on-the-beaches” policies: policies that excite; policies that men, women and Canadians of all classes and education levels can get behind. That sure isn’t out of reach.