The case for dining out in the middle of a pandemic

Amy Rosen: Canada's restaurants are on the brink of closing, which means part of culture could be lost 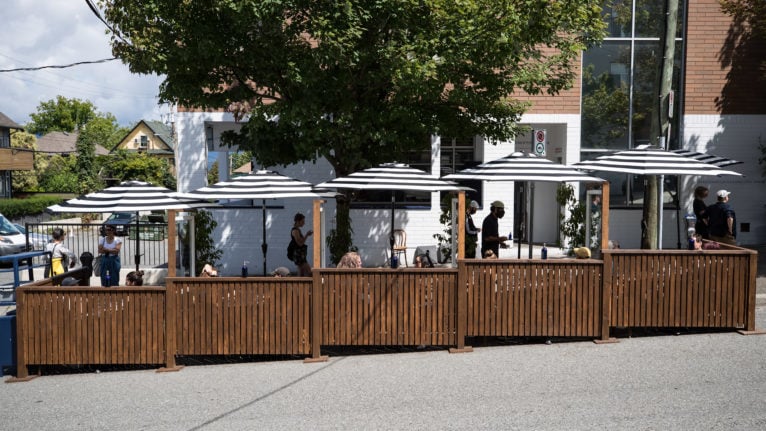 People dine on the patio space at Livia in Vancouver, on Jul. 12, 2020. The City of Vancouver allowed businesses to apply for the temporary patios to help restaurants and customers follow provincial health guidelines for physical distancing due to COVID-19. (Darryl Dyck/CP)

Amy Rosen is a food writer and the owner of Rosen’s Cinnamon Buns in Toronto. Her cookbook, Kosher Style: Over 100 Jewish recipes for the Modern Cook, was published in 2019.

At the onset of the pandemic, people started grocery shopping and cooking at home as if they were prepping to enter Biosphere 2, the epic 1991 experiment whereby a group of eight people entered a closed-system giant dome that was meant to be self-supporting for two years. They called themselves “Biospherians,” wore orange jumpsuits, grew their own crops, and recycled waste and air, as a way of seeing if it would be possible for human life to be sustained in such an environment on another planet. It did not go well. Deemed a failure mostly owing to interpersonal issues, nevertheless it reminded me of the prep work many of us were putting into the pandemic in March: Simply swap out space-age jumpers for tie-dye sweat suits, and crops for sourdough starter.

For many, those first few weeks were a fraught lifestyle focused on child care, Twitter scrolling, banana bread and Dalgona lattes. And for the first time in many people’s lives, meal plans were set and groceries were pre-ordered and hoarded, with many shipments arriving with missing items or substitutions. It wasn’t just toilet paper, hand sanitizer and thermometers selling out across the country. So too was bakeware, flour and yeast. Oh how we cooked. We cooked and we cooked and we cooked, and when we weren’t cooking we were baking.

As of Mar. 1, the top-10 recipe searches globally, according to Google Trends, included banana bread (number one), pizza dough, crepes, meatloaf, lasagna and cheesecake. By April everyone was sick of cooking and by May restaurant takeout took off. Now in July, patios are open and dining rooms are opening up across the country.

I didn’t realize how much I had missed restaurants until I returned to one of my favourites for my first patio dinner, at Foxley Bistro in Toronto late last month. Dining with a friend in one of six garden “pods”—wooden booths that chef and owner Tom Thai had extended with clear corrugated plastic panels skywards—everything was sublime and a reminder of how much better a bottle of dry Italian rose and Arctic char ceviche with green apple and ginger, tastes straight from the kitchen rather than as takeout. I had been missing the vibrant conversations, the thoughtful service, and food with varying temperatures and textures. I was actually surprised by how happy it all made me feel. But then again, happiness is the name of the game in the restaurant industry.

We owe much of that feeling to Monsieur Antoine Beauvilliers, a restaurateur, who in 1782 opened the first luxury restaurant in Paris. It was called La Grande Taverne de Londres and it became the world’s first fine dining restaurant, with a charming host-owner to boot. Jean Anthelme Brillat-Savarin, the gastronomic chronicler of his day, credited Beauvilliers with being the restaurateur who first combined the four essential elements of fine dining, as we still know them today: An elegant room, skilled waiters, stellar wine and superior cooking. While many of Canada’s best restaurants can’t be considered fine dining, they serve the same purpose and have become part of the fabric of our society.

Without restaurants, so too go the dreams of the young sous chef working to one day open her own boite, the specialty farmer bringing heritage breeds back from the brink, the cheesemakers (and the resulting dreamy cheese boards), the freshly graduated pastry chefs (and their miraculous desserts), the dishwashers (perhaps new immigrants on the first wrung up), and the chain that supports them all. Because we’re allowed to dream big and to eat well, and it’s why we shouldn’t write off restaurants as unnecessary. Dreams and memories are necessary.

In the late 1960s, across much of Canada, almost every chef in a fine dining restaurant was European and what was considered fine food was French (even though Chinese, Jewish and Italian restaurants were already around and were obviously delish.) Sometimes these French chefs would do their own takes on what was called “ethnic food”, which often amounted to curry powder swirled into a cream sauce poured over fried chicken in a chafing dish. Real curry in restaurants only arrived with a new wave of immigrants in the 70s, when East Indians and Southeast Asians started opening up their own mom-and-pop shops. Families laid roots. Taste buds were ignited. There was no going back.

Today, Canada’s restaurants are on the brink of closing and they need our help. I would argue that dining out is as important to a city’s culture and heritage as its galleries, arenas and museums. They are also part of our collective memories: The big birthday dinners, the bended-knee dessert engagements, the chicken wing binges while watching the Raptors win the NBA championships. From Newfoundland to Tofino, many of my fondest travel memories have happened in restaurants.

Some may say, “Read the room! It’s not for now; it’s not for everyone. It’s non-inclusive, and overtly decadent.” But just like the theatre, dining can be for all. Not only does it nourish, but can make you think, it can be art—on a patio during summer it’s almost like Shakespeare in the Park. On the best of nights, eating at a great restaurant can make you feel a range of emotions, broaden your perspective and make your heart soar.

And I think we deserve exactly that right now.