The case for invading America

Scott Gilmore: The days of accepting American light beer and draft dodgers with nary a complaint are done. Canada, it's time to fight. 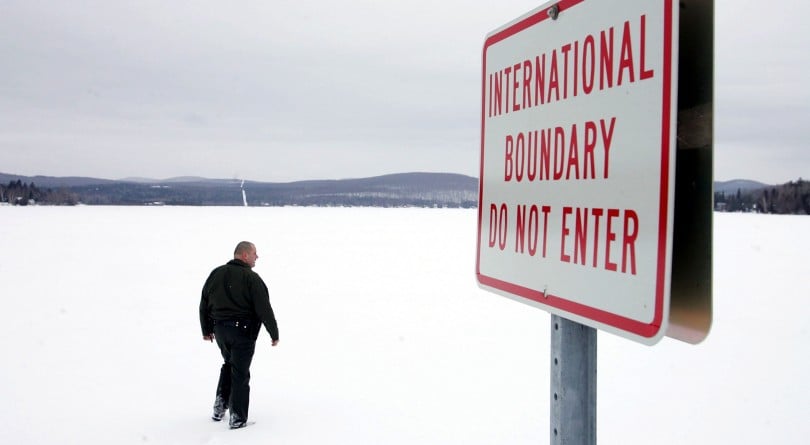 A U.S. Border Patrol Agent walks onto a frozen lake that is split between Canadian territory to the right and the U.S. March 22, 2006 near Norton, Vermont. (Photo by Joe Raedle/Getty Images)

Future historians will never be able to claim we didn’t try. As Foreign Minister Chrystia Freeland said at the end of the recent disastrous G7 summit (and while carefully avoiding the present tense) Canada is “the closest and strongest ally the United States has had.”

And it has not been easy; a more belligerent, loud and difficult neighbour would be hard to find. But we have remained unfailingly calm, helpful and even polite. We were there to accept their wayward American aircraft after 9/11. We fought and died beside them in Europe, Korea and Afghanistan. For decades, we’ve shared our intelligence, our maple syrup and our comedians. And in return we graciously took their draft dodgers, reality TV shows and light beer with nary a complaint.

Unfortunately, those days are past. Relations between Washington and Ottawa (and Mexico City, and Berlin, and London, and Paris, and Canberra, and Tokyo, and Seoul, and almost everywhere else except Moscow) have reached rock bottom.

Every effort has been made, through multilateral channels, bilateral visits, shuttle diplomacy and Broadway musicals to find a way out of this festering crisis. But none of these strategies have worked and we are now left with only one option: invade the United States in order to restore order and stability.

MORE: How Canada planned to invade the U.S. (and vice versa)

The case for military action is obvious, but nonetheless it deserves reviewing. First, America has become a failed state. The decades-long internecine conflict between the two main cultural factions, Republicans and Democrats, has led to the collapse of their political institutions. Laws cannot be passed. Ambassadors cannot be appointed. Even basic health care cannot be provided to all its citizens.

Corruption has reached third world levels. Congressmen and Senators spend so much time and effort collecting bribes (referred to as “campaign donations” in their local dialect) that they no longer have time to debate policy or legislation. Even the president has left himself wide open to allegations he is on the take, negotiating lucrative real estate deals for himself while he appoints family members to positions of power and influence.

As with other failed states, the United States is no longer able to control its own borders. Drugs and guns flow over their southern frontier and asylum seekers flee over their northern frontier. Due to an unchecked arms trade there are now more firearms in the United States than in Afghanistan, Iraq, Somalia, Yemen and Syria combined. This has led to unbridled violence which has made many areas of the country “no go zones.” (The murder rate is twice Europe’s.)

The President himself has declared Afghanistan is safer than Chicago. Sadly, this also means the American government is not even able to protect schools, which now endure mass shootings on a nearly weekly basis.

We must also agree the international community is obligated to intervene in order to protect vulnerable groups. Most notable of these are African Americans. This minority is systematically repressed, jailed at five times the rate of whites, with a life expectancy three years shorter, and an infant mortality rate twice as high.

Other ethnic populations are also facing growing abuse and discrimination, most notably Muslims, who the president has repeatedly sought to ban from entering the country.

The growing human rights abuses provide another reason why an invasion is necessary. The state terrifies its own citizens with an incarceration rate higher than Cuba, China, North Korea or Iran. Extra-judicial killings by the police happen on average three times a day. Recently American officials have even stooped to seizing the children of asylum seekers and detaining them in appalling conditions without access to any legal recourse.

READ: Seven times Canada and the U.S. went to war … in fiction

There is, of course, the WMD issue. We do not need to hold up any phony vials of evidence at the UN to justify this invasion. The country openly flaunts its stocks of nuclear, chemical and biological weapons. And the man who controls them has proven less predictable than Saddam Hussein or even Muammar Gaddafi.

President Trump regularly boasts of his willingness to use these weapons and that his “red button” is bigger than anyone else’s. What is worse, news has recently broken that those charged with safeguarding these weapons are using LSD. The world cannot rest until these weapons are out of the hands of this unstable and volatile leader.

Finally, we must consider the Monroe Doctrine. Ironically, America’s long-time policy of opposing European colonialism in the Western Hemisphere now applies to America itself. When Moscow made Grenada a client state, Washington had no choice but to invade in order to safeguard the stability of the region. Likewise, now that there is growing evidence Donald Trump was installed by the Kremlin, and given the president has openly shifted his foreign policy to support Russian interests, Ottawa really has no choice but to intercede.

Some may argue that a Canadian invasion of the United States would be self-serving. Yes, it is true that this is probably the only way to end our current trade war. The president is immune to reason, is unmoved by the damage he is doing to American industries, and is unwilling to negotiate. But even though a “peace operation” will safeguard Canada’s overpriced cheese products, I can assure you we take on this task with a heavy heart. As Minister Freeland herself said just yesterday, we to do this in sorrow, not in anger.

Others might have you believe an invasion is impractical, expensive or even doomed to bog Canada down in a quagmire. This is all untrue. The United States military is currently deployed in over 150 countries around the world. That must leave almost nobody on this side of the Atlantic. And while it is true the Pentagon has the world’s largest navy, Canada now has so few seaworthy ships, the Americans will be hard pressed to even find them.

Our invasion may be slowed due to the usual congestion at the border crossings, but if we time our attack mid-week, traffic on the Ambassador Bridge should be manageable. And, of course, we have our secret weapon—the Canadian fifth column of actors and athletes. Justin Bieber and Nickelback have already done more to dull American senses than even the most sophisticated propaganda or psy-ops campaign could ever achieve.

I concede, this does seem like a drastic step. But, these are drastic times. And invading the United States will allow us to help the Americans help themselves. Once stabilization operations are complete, we can begin a nation-building campaign so they finally obtain the peace, order and good governance they have longed for over so many years. We will be greeted as liberators.

We will launch training programs to explain gender equality, democracy and climate science. A UN-monitored election will ensure fair play, eliminate gerrymandering, and prevent Moscow from interfering again. We can make much needed infrastructure investments in American airports that will finally allow them to connect to the outside world (and in pipelines so they can connect to our oil). With enough NGOs, aid workers, contractors and cash we can finally bring peace to the region, usher the United States into the community of nations, and create new markets for our cheese and cheese-related products.