The English church could learn something from Canada

Michael Coren: The Church of England's recent statements about same-sex marriage is a slap in the face to LGBTQ2 people who've remained faithful to the church 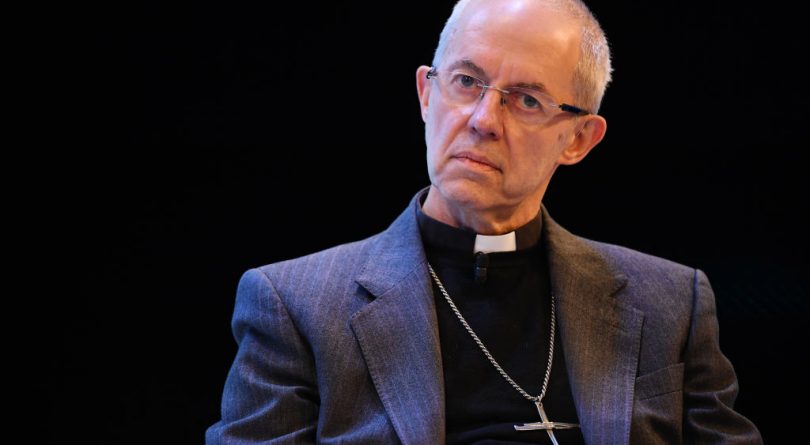 Justin Welby, Archbishop of Canterbury talks at a debate on social inequality at the annual CBI conference on Nov. 2019 in London, England. (Leon Neal/Getty)

Now here’s a jarring thought: the Church of England, the established church of the country, allows its clergy to bless battleships and bulldogs (or any other dog for that matter) but not the loving, sacrificial unions of people of the same gender. Equal marriage may be the law of the land in Britain, but the Anglican Church has different ideas.

It’s all rather complex, but became particularly newsworthy last week, even trended for a day on Canadian Twitter, and has provoked a monumental reaction in the British media when the church issued a statement that sex only belongs within heterosexual marriage and that sex outside of marriage, gay or straight, “falls short of God’s purpose for human beings.” This was in reaction to the country’s recent introduction of civil partnerships for heterosexual couples, after it had instituted them in 2005 as a halfway house for the gay community, before full marriage was eventually granted eight years later.

The guidelines go on to state, “For Christians, marriage—that is, the lifelong union between a man and a woman, contracted with the making of vows—remains the proper context for sexual activity” and spent some time explaining why traditional marriage is the only genuinely Christian possibility, shocking a myriad of devout Christians who live in others forms of relationships.

The timing is clumsy for the Church of England, as it seeks to walk a tightrope between those in the international communion (including Canada), who take a more liberal approach to the issue, and the far more conservative churches in Africa and the Caribbean. It’s a difficult balancing act, and generally satisfies neither side. Better, surely, to side with Christian love and to damn the religious torpedoes.

Then, in an extraordinary turn of events, and turn of minds, on Thursday, The Church of England issued an official statement of semi-contrition from the Archbishops of Canterbury and York, Justin Welby and John Sentamu, respectively. “We as archbishops, alongside the bishops of the Church of England, apologize and take responsibility for releasing a statement last week which we acknowledge has jeopardized trust,” they said. “We are very sorry and recognize the division and hurt this has caused.”

While the gesture is to be appreciated, it doesn’t address why the original document was issued, and although it leaves certain doors slightly open, the church’s stance remains essentially unchanged. The background to all this is that the English church doesn’t allow same-sex marriage but does permit its clergy to be in same-sex civil partnerships as long as they promise abstinence. There are a number of these unions in the church, and while whether they are genuinely celibate is certainly not for me to judge, surely reality cries out to be heard. It puts those people, and their bishops who are hardly unworldly and generally aware of what is going on, in a ridiculous and untenable position.

To younger people, and to many theologians, it all seems so bizarre, as well as enervating and downright harmful. It of course agonizes LGBTQ2 Christians, who have remained faithful to the church in spite of marginalization or even persecution, and it’s also a subject that is at best on the periphery of Christian belief. The New Testament never mentions homosexuality, the Old Testament doesn’t refer to lesbianism, and the usual scriptural passages used to condemn same-sex relationships are misunderstood and often soaked in a context and era that have no contemporary relevance. Most of all, the rejection of same-sex people in their totality fails to grasp that it’s love and acceptance rather than legalism and judgment that epitomize the gospels.

Andrew Foreshew-Cain is the chaplain at Lady Margaret Hall, University of Oxford, and a priest who married his same-sex partner. He faced harsh consequences. His appointment at the college was due to the insistence of the progressive principal, and very much against the wishes of the church. He is also, I should stress, a friend.

“In the statement the bishops, [they] have reiterated that civil partnerships of whatever stripe, and of course same-sex marriages, are substandard and second rate. Marriage, and the marriage of one man to one women alone, must be considered to be ‘central to the stability and health of human society’.  There is no exploration of the wider theological understanding of marriage within the Christian community and how it has changed both in popular understanding, Christian theology and regulation over the centuries.”

In Canada, far more has been achieved, but there is still work to be done. Three years ago the synod (the church’s governing body), voted to give formal and sacramental acknowledgment of the church to LGBTQ people who wanted to embrace holy and lifelong commitments. Last July, however, the synod voted differently. While the clergy and laity overwhelmingly approved, the order of bishops gave only 62 per cent support, just one or two votes shy of what was required, and two successive synods have to vote support for a measure to be accepted. Even so, room for local options was provided and most of the largest dioceses do indeed marry gay couples. It’s not perfect, but the English church could learn a great deal from Canada.

The English bishops likely didn’t expect the size and intensity of the reaction to their statement—both within the church and in the wider, secular world—and may regret what they wrote. In years to come organized Christianity will probably look back on this period and this subject, partly in shame and partly with incredulity. What, they will ask, was all the fuss about! What indeed?