The G7 question: How do we America-proof the West?

Scott Gilmore: America has gone from bulwark of the western alliance to a threat. It's time for a strategy to contain the U.S. and defend ourselves. 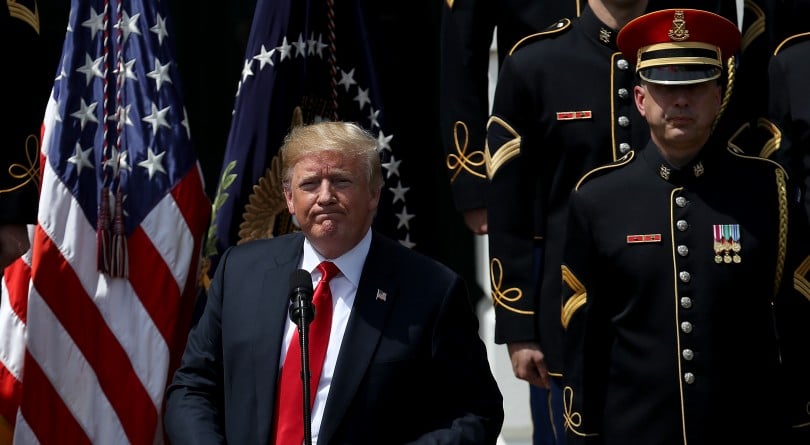 This may be remembered as the most unusual G7 summit in history.

In the last week the president of the United States has started a trade war with five of the other six members, called Canada a national security threat, and reportedly yelled at French President Emmanuelle Macron over the phone. The day before the summit is to begin, there are leaks coming out of the White House that the president is looking for further ways to “punish” America’s erstwhile allies, and may send the vice president in his place.

When the G7 was still called the G8, and included Russia, summit diplomacy could be complicated. The policy differences between Moscow and the rest of the members were often stark, and negotiating a joint communiqué at the conclusion required some masterful wordsmithing. (One of the first things I learned when I was in the Canadian Foreign Service was how to write a sentence with enough seemingly innocuous qualifiers that there would be no danger of any two people, after having read it, taking away the same meaning.)

In that context, the summit was seen as a way to engage and constrain a disruptive and unpredictable Russia. But eventually the differences between Moscow and the rest of the assembled countries became too great (the final straw being the annexation of Crimea)—Russia was kicked out.

Now, the G7 is forced to deal with another rogue member: the United States.

In the context of the last 50 years of global politics, this is an incredible development. The U.S. has been the keystone nation of the western alliance. It has set the agenda, encouraged unity and offered protection. In fact, Washington was the architect of most of the international structures that have come to define the West. The United Nations, the World Bank, the International Monetary Fund, the WTO, NATO, NORAD, NAFTA, and even the G7 itself—these were all either American initiatives, or began with American support.

Within that framework, Washington led a western agenda for decades that prioritized three things: expanded global trade, collective security and democracy. But in the span of 18 months this has all changed.

President Donald Trump has completely upended the post-cold war security strategy. He came to office denigrating the importance of the NATO. The U.S. then unilaterally pulled out of the Iran nuclear deal, against the pleas of all its European allies. It was no surprise when Chancellor Angela Merkel of Germany recently conceded the days when Europe could rely on Washington are over.

The West’s democratic agenda is also in tatters. Trump has refused to admit Moscow has been covertly disrupting western elections (including his own), he congratulated Putin after rigging the Russian election, and he celebrated China’s Xi Jinping for being declared de facto “president for life”. This week Trump’s Ambassador to Germany told the far-right news platform Breitbart he wants to “empower” the nationalist conservative movements that are growing in Europe.

But the biggest change in Washington’s role has been on issues of trade. Trump began his presidency by pulling out of the Trans Pacific Partnership. He then forced a renegotiation of NAFTA. And in the days leading up to the G7 summit, he sparked a tariff war with all of America’s largest trade partners.

As the West faces an increasingly aggressive Russia, the largest refugee crisis in recent history, and an expansionary China, the game plan is in tatters. What’s worse, Washington, once the western alliance’s star quarterback, is now intentionally throwing interception after interception.

Until now, we have depended on America to be the bulwark of the western alliance. Now we have to see it as a threat. The unexpected, astounding, and until now unspoken question that will be on the mind of the rest of the world leaders gathered in Quebec this week is this: How do we America-proof the west?

We can begin by shifting our diplomatic efforts away from the traditional hub and spoke model (with Washington at the centre) towards a more interlaced bilateral system. The G7 used to be an excellent forum to coordinate western policy—but now it will be difficult or even impossible to speak frankly in front of Trump. By necessity, the other leaders have likely already increased the amount of time they spend talking one-on-one with each other, trying to decipher Trump and then deal with him.

The West can also redouble its efforts to strengthen multilateral organizations like the UN and the WTO. Ironically, we once made this a priority because this was a way to constrain Russia. Now, for the same reasons, these institutions can help constrain the U.S.

We can also do something that Trump himself wants: defend ourselves. As Merkel has acknowledged, we can no longer rely on Washington, so we must learn to rely on ourselves. That will require investments in our armed forces, and a willingness to take the lead in managing international crises, such as Syria.

And, we can defend the free trade agenda from Trump by adopting a policy of automatic collective reciprocity: any trade penalty meted out on a western ally will be returned in kind, by all the allies. If Trump adds a tax on steel imports from Canada, then all of the other allies should coordinate and apply the same reprisal in return.

No one wins a trade war, but this strategy, at least, will prevent Trump from pitting one country against another, as he has tried with Mexico and Canada. If we do not hang together, he will ensure we hang separately.

Most importantly, we can simply acknowledge that the over-reliance on one country has been a potentially fatal flaw in our post-cold war alliance. This has left us vulnerable to America’s infamously erratic domestic politics, and threatens to unravel seven decades of work to build a secure, prosperous and stable coalition of democracies. But it’s not too late to fix it and America-proof the West.