The glaring omission on the Supreme Court

Heidi Matthews: If we're going to take reconciliation seriously, Canadian law needs to change, and it needs to start at the top 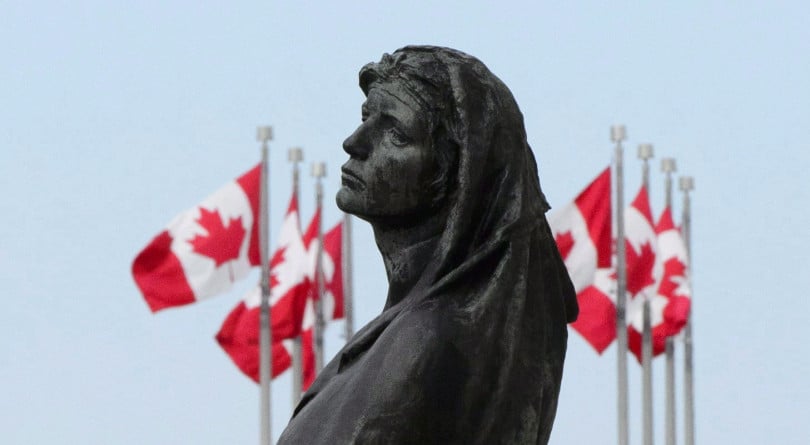 The statue of Veritas is shown in front of the Supreme Court of Canada in Ottawa on May 23, 2018 (Sean Kilpatrick/CP)

Canada’s legal system is core to its identity. At home, Canadians are encouraged to celebrate the 1982 Charter of Rights and Freedoms as one of Canada’s “greatest accomplishments.” Abroad, Canada has used its constitution to project itself as a world leader in protecting fundamental rights in a multicultural society committed to both democracy and equality. In the 1990s, the Charter strongly influenced Israel’s basic law on human dignity and liberty, and was used as a model for South Africa’s post-apartheid constitution.

But traditional narratives about the model moral authority of Canadian law obscure the centrality of law in Canada’s violent colonial foundation. While Canada has formally patriated its constitution from the British Parliament, it would be a mistake to think that Canada ceased being a colonial state in 1982. As the reports of the 2015 Truth and Reconciliation Commission (TRC) and the recent National Inquiry into Missing and Murdered Indigenous Women and Girls (MMIWG) make clear, Canadian law, even in the Charter era, has been a key tool of Indigenous oppression.

Canada now finds itself in a transitional moment. If we are to take reconciliation seriously at all, we need to start by recognizing—and actively challenging—the ways in which our European-based legal system displaces Indigenous laws. For example, it is widely recognized that the over-incarceration of Indigenous people in Canada is the direct result of the experience of colonialism.

Effectively addressing the continued impact of Canada’s history requires decolonizing Canadian law; in other words, imagining what Canadian law could be if it had not been directed toward the destruction of Indigenous nations, cultures and laws.

This must not only be done; it must also be seen to be done. Structural change must start at the top, with the composition of the Supreme Court of Canada.

However, with its recent nomination of Quebec Court of Appeal Justice Nicholas Kasirer to replace retiring Justice Clément Gascon, the Trudeau government is in the process of scuttling a key opportunity to further reconciliation. Justice Kasirer’s nomination is the third since the TRC report, and the first since the MMIWG report found “serious reasons to believe” that Canada, by its acts and omissions, is responsible for genocide against Indigenous peoples and nations.

On Thursday, Justice Kasirer will appear before members of the House of Commons Standing Committee on Justice and Human Rights as well as the Senate Standing Committee on Legal and Constitutional Affairs for a question and answer session. The final appointment, however, rests with the Prime Minister.

Indigenous justice advocates have long called for an Indigenous appointment, and the MMIWG report specifically “called upon federal, provincial, and territorial governments to increase Indigenous representation in all Canadian courts, including within the Supreme Court of Canada.”

The nomination processes for both Justices Malcolm Rowe and Sheilah Martin concentrated heavily on the question of reconciliation and respect for Indigenous legal traditions. Many in the legal and Indigenous communities expressed deep disappointment at Martin’s nomination, since three of the candidates considered for that seat were Indigenous.

In sharp distinction, the media has been virtually silent on the implications of Justice Kasirer’s nomination for reconciliation.

Attention has focused instead on Justice Kasirer’s pedigree, his mastery of Canada’s two colonial legal traditions and languages, and his potential to act as a “consensus-builder” on the Court.

In part this is unsurprising, given that Kasirer is filling one of three Supreme Court seats required by law to be held by a member of the Quebec bar. In 2014 the Court held that its composition, as provided for in the Supreme Court Act, is constitutionally entrenched and can only be altered with “the unanimous consent of Parliament and the provincial legislatures.”

The nomination also comes after Trudeau concluded an arrangement with the government of Quebec that, hearkening back to the days of Meech Lake, gives the province a unique power to influence appointments.

Shoring up Quebec’s power with respect to the Supreme Court does not necessarily exclude an Indigenous justice being nominated from that province. In practice, however, nominations from Quebec focus attention on the need, real or perceived, to promote both the French language and the civil law.

The new requirement, since 2016, that Supreme Court appointees be functionally bilingual, has already had a chilling effect on the prospects of an Indigenous justice. Justice Harry Laforme, the first and only Indigenous judge to sit on an appellate court in Canada, has said that he declined to apply to the Court when invited by former prime minister Kim Campbell because he does not speak French.

To be sure, Justice Kasirer has passionately and laudably dedicated his career to parsing how to reason about and teach law in a “bijural” legal system. In his questionnaire considered by the Independent Advisory Board for Supreme Court of Canada Judicial Appointments, Justice Kasirer discussed how he sees “the civil and the common law in a uniquely Canadian dialogue, potentially with other legal traditions, including Indigenous law.”

While it can be fruitful to consider the common and civil law as existing ‘in dialogue,’ we should not forget that this dialogue produces and distributes power in Canadian society. Read alongside the bilingualism requirement, this approach to Canadian law reinforces the discredited “two nations” myth about the foundation of Canada, thereby reasserting the dominance of English and French over Indigenous legal traditions, languages and cultures.

Only because of the painstaking efforts of Indigenous Elders, advocates and knowledge keepers are Indigenous legal traditions gaining long overdue recognition within the broader context of Canada’s legal system. Just as bilingualism is key to protecting the role of the civil law in Supreme Court governance, reinvigorating Indigenous languages—a core demand of reconciliation—would be promoted by a justice familiar with Indigenous law and culture.

During the secession crisis of the 1990s, it may have made political sense to focus on stabilizing the prominence of civil law on the Court. But in 2019, the bilingual and bijural bargain between the “two solitudes” is simply not enough. In the immediate aftermath of Prime Minister Trudeau’s recognition of an ongoing genocide against Indigenous peoples, failure to appoint an Indigenous justice to Canada’s highest court re-entrenches the colonial legal structures that have facilitated that genocide.

There is still time for Trudeau to change course. While the Supreme Court certainly cannot solve all the problems of colonialism, appointing an Indigenous justice would be a momentous step toward doing Canadian law differently, not just with respect to Indigenous issues, but for the benefit of all Canadians.

MORE ABOUT THE SUPREME COURT OF CANADA: