The Green Party won’t be silenced by TVA

Elizabeth May: Excluding Greens from debates isn’t just anti-democratic, it does a disservice to Canadians. We won’t back down. 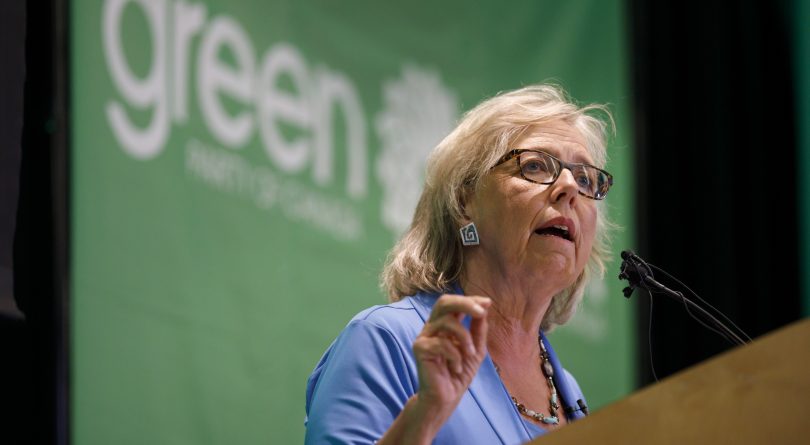 Green Party of Canada leader Elizabeth May speaks in Toronto prior to a fireside chat about the climate, Tuesday, Sept. 3, 2019. (Cole Burston/CP)

Elizabeth May is the leader of the Green Party of Canada.

The debate on debates has been a perennial nightmare of my life as leader of the Green Party.  The world of murky criteria, back-room dealing, collusion between other parties to exclude Greens from debates, have been an anti-democratic scandal from 2008, 2011, and 2015. Unfortunately, I have been excluded from more debates than those which have included my voice.  But with the newly formed Debates Commission, I thought that problem would be an issue of the past.

My resigned indignation at being excluded from the French TVA debate is not about me. It’s about giving Canadians a choice—a choice to hear from every leader of Canada’s major political parties.  This is the first debate in which the Prime Minister is participating. It is a crucial moment for all Canadians.

In Canada, all parties represented in Parliament should be included in debates. By excluding a Green voice, TVA fails to offer the full picture that voters are facing at the polls this election.

MORE: The Elizabeth May show and the first leaders debate

There is another facet to my exclusion, too. As the only female leader, TVA, whether they intended to or not, are excluding 50 per cent of our population from being represented on the debate stage. And for this, I am disappointed in the other male leaders.  To varying degrees they want to be seen as supporting the role of women in our society. In 2015, I was grateful for Justin Trudeau’s support for my participation. He explained that he wanted his daughter to see a woman on stage. What has changed in 2019?

What this comes down to is doing what is right. What is fair. What is democratic.

And sadly, TVA chose not to do that with their debate. Instead of following the impartial non-partisan criteria set out by Federal Debates Commission, TVA chose to bend the rules to suit their interests.

I know that Greens will see real growth in French-speaking Canada this election. We’ve seen this growth over the past four years throughout Canada. In New Brunswick (Canada’s only officially bilingual province) there are three Green MLAs in the legislature—two from prominently Francophone communities. In the 2017 by-election in St-Laurent, Green Party Deputy Leader Daniel Green came in third place ahead of the NDP. In the 2019 Outremont by-election, Mr. Green again placed third, ahead of the Conservatives and Bloc Québécois.

According to one recent poll, Greens are currently polling in second place in the province of Quebec. These numbers should be more than enough of a signifier to justify the inclusion of Greens in a Quebec-specific debate. Excluding Greens from debates isn’t just anti-democratic, it does a disservice to the election process and the Canadian electorate as a whole.

After 13 years in federal politics, I know the larger parties wish that we would just go away. TVA’s attempt to silence me, and as a result our many talented candidates across the country, will not stop us from fighting for what is right. Together, we will overcome this unfair disadvantage.

We are unabashed in our bold vision for Canada, and we won’t back down. Even though it’s not fair, I see TVA’s exclusion as a sign that the Green Party of Canada is growing.

I encourage Canadians to watch the National Televised Leaders Debates on Oct. 7 in English and on Oct. 10 in French. This is a critical election, and Canadians have a real chance at making a difference. The likelihood of a minority government is high. Without the spectre of strategic and fear-based voting, we can all vote for what we want, in support of the values we share. I hope that after seeing what Greens stand for, you will consider casting your ballot for us on Oct. 21.

MORE ABOUT ELIZABETH MAY: