The lesson behind Canada’s most dangerous cities

How can we talk about crime—and where it’s happening—without talking about the conditions that create and sustain it? 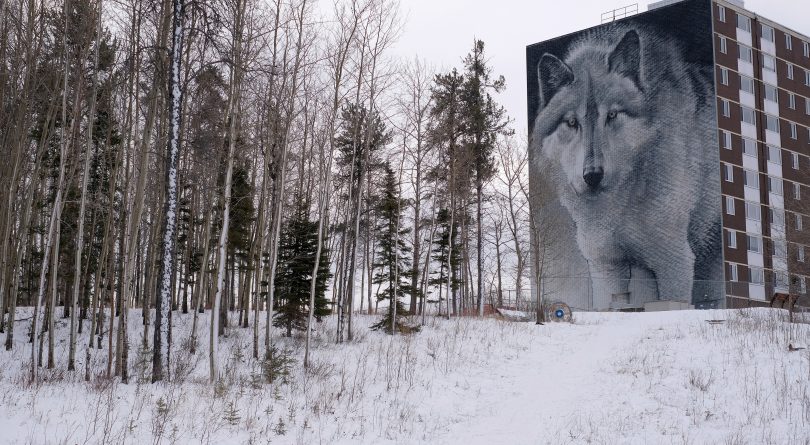 A reproduction of a Robert Bateman wolf painting on the side of the Highland Tower in Thompson, Man. (Photograph by Shannon VanRaes)

Canadian anthropologist Wade Davis tells a story in his 2004 Massey Lectures about a Malaysian tribal group called the Penan who when visiting Canada were struck by the homelessness they saw because they could not comprehend how in cities as rich as ours such a thing could exist.

Maclean’s recently ranked Canada’s most dangerous places and they are not the urban centres we often associate with high rates of violent crime. For the most part, they are rural Canadian towns and small cities: North Battleford, Thompson, Wetaskiwin, Portage La Prairie. As the feature article on Thompson, Man., which has held the top position of Canada’s most violent city three years running points out, it is a city which “faces the same, complex issues as much larger urban centres—transient populations, inconsistent funding, addictions and homelessness—plus the deep legacy of colonization.”

The similarity amongst the Maclean’s ranking might be violent crime on the surface, but the question it brings to bear is how can we talk about crime without talking about the conditions that create and sustain it? And how can we talk about homelessness and poverty in Canada without talking about the lived experiences of Indigenous children, people and communities that have led to such overrepresentation?

The consensus in research is that there is a direct correlation between poverty and crime, but there is also a correlation between poverty and social structures, and the other social determinants of health—including education, early childhood, housing, food insecurity, gender, social exclusion—are of critical importance. The effects of poverty are magnified when such populations converge in one place, and more often than not it is these communities especially that are not only under resourced but invisible to the broader population.

Social policies have a direct impact on people’s lived experiences. One in two Indigenous children live below the poverty line. Over half of all children in the child welfare system are Indigenous. The overall violent victimization rate among Indigenous people is more than double the rate of non-Indigenous people and for Indigenous women it is much higher. Perhaps when we turn our attention to the rate of crime, we should consider violent crime not simply as an outcome, but rather as an indicator. An indication of the ways in which we are failing.

As we move from the small cities that have been left no alternative but to foster the conditions for violent crime to thrive, we turn our gaze ahead to the youngest and fastest growing segment of our population—young Indigenous Canadians, so many of whom are living in a cycle they were born into. Despite the origins from which the cycle of poverty in rural Canada stems—structural racism and systemic oppression, a legacy of colonization, lack of sufficient housing and clean drinking water, the reverberations of which can be seen in mental health, addictions, and violent crime—people and communities are still breathing. While many carry the weight of this generational trauma, and some have been bowed by it, they are supported too by the mettle of generational power.

The shared history that continues to play out is a history that we have inherited together. And yet, we have a future to write. In every way, it is a future Indigenous Canada is already successfully writing in the lives of their children. How non-Indigenous Canada chooses to participate will be our legacy, because we also have a weight to carry; the responsibility that in this country, all children must have the opportunity to do so much more than breathe.

The Penan believe that the poor man shames us all.  While some might argue that such social issues are an unfortunate inevitability of an otherwise successful economy, before we condemn the very communities that most require our attention for their supposed rate of crime, should we not recognize that in so doing, we will also be condemning the state of the social resources available, indeed, the very resources we know support people and communities to prevail.