The myth of American greatness 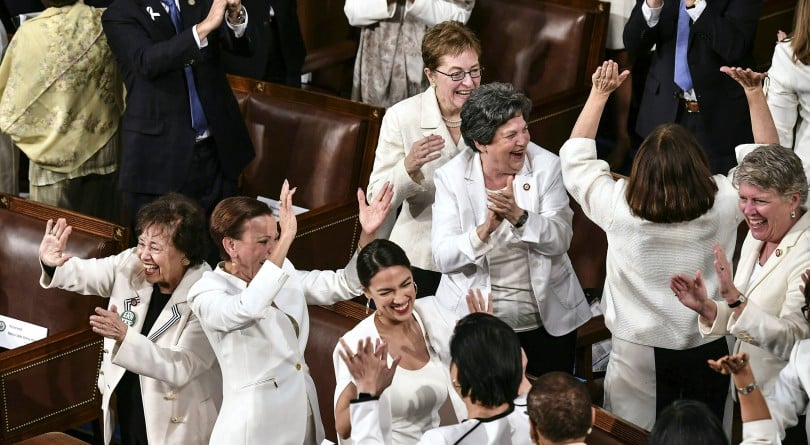 Lawmakers react to Trump's acknowledgement of an increased presence of women on Capitol Hill during his State of the Union address in Washington, on Feb. 5, 2019. (MANDEL NGAN/AFP/Getty Images)

The most disturbing moment during President Donald Trump’s State of the Union address came at around the 1 hour and 20 minute mark. Over the course of a rambling and often contradictory speech, Trump talked about unity and then inexplicably doubled-down on the divisive issues he has used consistently to keep his base fired up. In response, his supporters began chanting that familiar refrain: “U.S.A.! U.S.A.! U.S.A.!”

No surprise from what is ostensibly a nationalist, jingoistic Republican right in America. But at that hour and 20 minute or so mark, something strange happened: Trump gave a nod to the Democratic party’s newly-elected female representatives in the audience, acknowledging that they made up the highest proportion of women in the U.S. government in its history. The women then stood up and began chanting,”U.S.A.! U.S.A.! U.S.A.!”

It was stark reminder of the depth of U.S. exceptionalism: The belief in American greatness isn’t limited to the right; it permeates all of American society.

But what is greatness? Is it defined by a bunch of Olympic medals, or a fat GDP or a clutch of Nobel prizes? In absolute terms, there’s no question that the U.S. far surpasses the rest of the world in all of those categories.

But the U.S. also has, by far, the largest population of the world’s most advanced countries, and a running tally of its achievements doesn’t give us a clear picture of how it is doing compared to other nations. Take Nobel laureates, a measure of a country’s intellectual output: The U.S. leads the world with 375 (its closest competitor is the U.K. at 129). But on a more realistic per capita basis, it ranks 16th. Similarly with Olympic medals: at the 2016 Rio games, the U.S. medal haul was 121. The U.K. came second with 67. In per capita terms, however, it ranked 16th, one spot behind Canada; as for GDP, America’s was a staggering $19.39 trillion in 2017; in per capita terms (PPP-adjusted), it ranked seventh.

So if not brain power, athletic prowess and wealth, what is it that justifies Trump’s State of the Union claim that “there is nothing anywhere in the world that can compete with America”?

Is it military power? The U.S. clearly fields the most formidable military force in the world. According to World Bank data, it spent 3.15 per cent of GDP on its military in 2017. But is that a sign of greatness? That depends on how you define it. In Canada and most other liberal democracies, the trend since the end of the Cold War has been to shift spending away from the military to social programs, to, in other words, build fair and functioning societies linked together in a web of alliances that ensure mutual security. (The predominance of neo-liberal economic policies in places like the U.K. has been the Achilles’ heel of that shift, resulting in massive inequalities.)

What’s telling is that the countries which spend as much as the U.S. on their militaries are all Middle Eastern and Central Asian authoritarian regimes. In modern societies, it’s not brawn that determines a nation’s success, it’s brains.

The U.S., of course, is not stupid, right? According to the OECD’s 2015 Programme for International Student Assessment (PISA) report, measuring the aptitude of 15-year olds in science, reading comprehension and math, out of 35 OECD countries, the U.S. placed 19th in science, 20th in reading and 31st in math.

Of course, I don’t mean to say the U.S. as a whole is stupid. It has its fair share of talented people. But its rank as a world thought-leader has declined precipitously. It still has some of the world’s best universities but even those, according to the authors of a 2009 paper published in the academic journal Higher Education, are increasingly reliant on imported talent.

This is one of the side effects of the disproportionate amount of money the U.S. spends on its military. American infrastructure is in a state of decay, its education system is in crisis and it has the worst public health system of all advanced countries. But still Trump continues to massively increase military spending and talks about American greatness as if it can be distilled down to winners and losers, rich and poor, strong and weak.

Greatness, of course, is much more complicated.

According to the 2018 United Nations Development Index, ranking countries based on their citizens’ life expectancy, access to education and economic output, the U.S. comes in at respectable but certainly not exemplary 13th place. And it is on a downward trend, in part because of the collapse of its social safety nets. (The U.S. maternal mortality rate, for instance, has doubled over the last two decades, placing it 46th in the world, according to the World Bank.) And in terms of overall contentment, Americans rank 18th in the world, based on the most recent World Happiness Report.

Average education, poor health care, crumbling infrastructure, average incomes, moderate happiness. No doubt America’s achievements are many, but when it comes to the true measure of greatness—a society’s ability to provide freedom and opportunity to all of its citizens, it is a middling power.

Worse, American greatness is a delusion that shapes how the U.S. interacts with the rest of the world, seeking dominance and demanding more respect than it now deserves. Rather than chasing that imaginary figment, perhaps it would be better off conceding it is, at best, an equal among its peers, and a nation that has a lot to learn from the rest of us.