The one thing that could bring back responsible government

Tom Parkin: A referendum this fall in B.C. could spark a Canada-wide move toward electoral reform—and restore some faith in our democracy 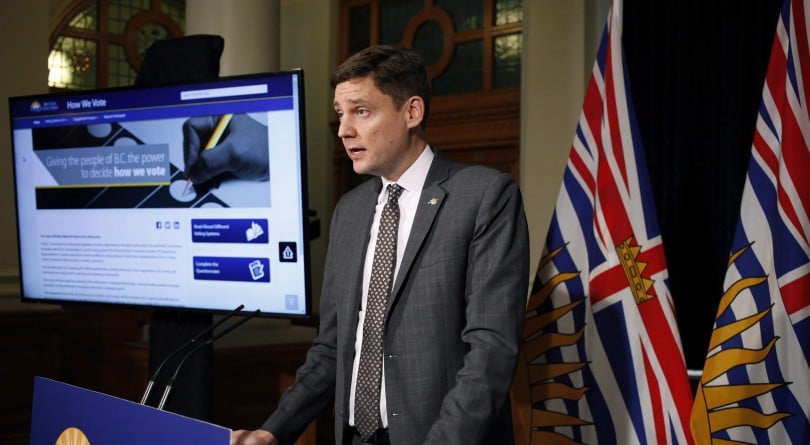 For all those sickened by what the first-past-the-post electoral system brought to the office of U.S. president and Ontario premier, to everyone tired of their vote not mattering, for those of us who believe a stronger democracy is needed to protect or our rights, freedoms and opportunity, there is some very good news.

We are the majority. And at least in British Columbia, that matters.

A survey of Canadians by Angus Reid released Friday morning found 56 per cent support for proportional representation—where the number of votes a party earns matches the proportion of seats it wins. That’s a 12 point lead over those who support first-past-the-post.

In British Columbia, where there will be a referendum on the issue this fall, proportional representation holds a 14 point lead.

There’s a significant group of undecideds and it’s a bad practice to count chickens before the eggs hatch, but there’s a couple good reasons to be optimistic.

And the B.C. premier has promised to respect the result. After a series of referendums in Prince Edward Island, 55 per cent of ballots marked between one of the final two options supported proportional representation. But Premier Wade McLaughlan’s Liberals refused to make the change.

If the B.C. referendum succeeds, its October 2021 general election will be Canada’s first proportional election. It could lead to a cascade of change.

We’ve seen this cascade in political finance. But it took years. With proportional representation, we don’t have that time.

In 1977, Rene Levesque’s PQ government banned corporate and union political donations. There was a long pause. Then, in 2000, Gary Doer’s Manitoba NDP government banned union and corporate donations. In 2003 the Chretien Liberals took the step. In 2009 Darrell Dexter’s Nova Scotia NDP did it. In 2015 the Alberta NDP Notely government made it their first bill. In 2016 the Ontario Wynne Liberals followed suit. New Brunswick Liberal Brian Gallant’s ban came in into effect in June 2017. In fall 2017, the B.C. NDP Horgan government passed its ban.

No one is looking back. Not one jurisdiction has reversed its ban. No political party is arguing for it. Now, it really seems preposterous it was ever allowed.

Recent events continue to show the need for electoral change. Last week’s New Brunswick election gave one more seat to the Conservatives than Liberals, even through the Liberals’ popular support was six points higher. And in Monday’s Quebec election–where polls show a tie between the Liberals and Coalition Avenir Quebec–the Liberals are heavily handicapped by support concentrated in a few seats.

And let’s not forget that Donald Trump lost the popular vote, but won through the U.S. Electoral College’s series of first-past-the-post races.

Under first-past-the-post, legislative majorities are too easily given, sometimes with as little as 37 per cent support.

And now fixing that problem has added urgency—because the political right now often rejects the norms and customs that previously held a check on majority power.

While well-meaning people debate which things Ford really won a ‘mandate’ to do, Ford is using his 75 MPPs as proxy votes to do whatever he wants.

And when Ford stood for pictures with a group of white supremacists—and took four days to give a half-assed denunciation under duress —none of his 75 proxies objected.

This is new. Very new.

On the right, legislative majorities are now being interpreted as a right to one-man rule—with the power to suspend charter rights and freedoms. Because he can.

So our legislatures and parliaments need to matter again. Proportional representation would result in less frequent majorities and make premiers more accountable to the legislature again. A premier’s need to find support in the legislature can play the role norms and customs used to.

If B.C.’s 2021 election, using proportional representation, is a success, it becomes a model. And hopefully it starts a cascade—one that runs quickly. Because this isn’t an academic political science problem. It’s an urgent real world problem.