The people Via Rail is leaving behind

Stephen Maher: The Crown corporation's new no-cash rule for buying food hurts the 10 per cent of the population that doesn't have a credit card 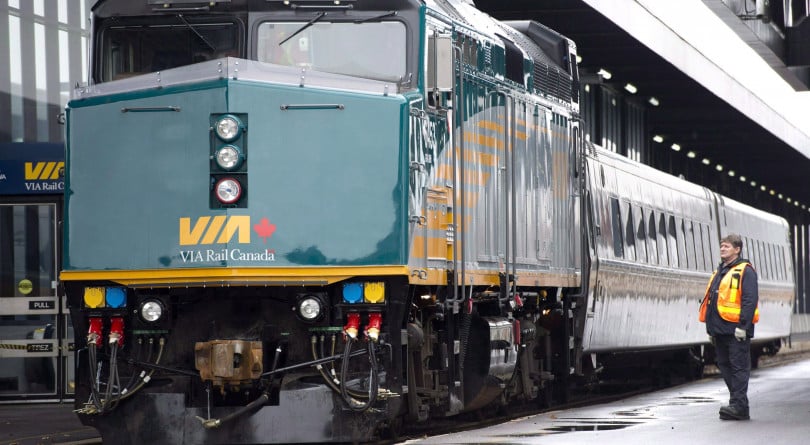 A VIA Rail employee stands on the platform at the train station in Ottawa on Dec. 3, 2012 (THE CANADIAN PRESS/Adrian Wyld)

At the end of October, Via Rail announced that it would only accept payment for food and beverages by credit cards and gift cards on most of its routes, which means that people without credit cards—about 10 per cent of the population—can no longer buy a coffee or a sandwich on the train.

Because Via Rail is a Crown corporation, this decision offers an opportunity for politicians to consider the impact of this kind of move on those who are being left out as we move to a cashless economy.

Zach Wells, a Unifor representative who works as an attendant on the Ocean (the run between Halifax and Montreal), says the railway has instructed staff to make sure nobody goes hungry during the phase-in, and people are finding ways to live with the new rules. “What I’ve been doing is running a tab until we get to a station where the passenger can get off and purchase a gift card with their cash,” he said.

Sometimes, passengers without plastic are giving cash to passengers with credit cards who can make the purchase for them. “There are frustrations with it because it’s creating problems for passengers, which creates problems for us,” Wells said. “They are not insurmountable problems. They’re nuisances.”

Via is following in the footsteps of Air Canada, which stopped taking cash on its flights in 2010, and a growing number of retailers—like the Ontario restaurant chain Mad Radish—that only take plastic. Canadians, especially younger people, are increasingly using plastic to pay for even small purchases. Two thirds of Canadians say they hardly ever carry cash.

Many businesses prefer electronic payments, because they reduce expenses and theft, and because they can track transactions more easily. According to a 2017 Bank of Canada research paper, 99 per cent of Canadians have a bank account, and 89 per cent have a credit card.

That is not everyone, and Via is making life tough for people without plastic, said Alejandra Ruiz Vargas, a spokeswoman for anti-poverty group ACORN. “That means Via lives in another world, because there are a lot of people who don’t use cards. When you are poor, you don’t have credit.”

It’s a bad idea to force low-income people to use credit cards, she said. “You encourage people to get in debt. It’s so easy, especially in a society where everybody’s ‘I want I want.’”

Research shows Indigenous people are less likely to have bank accounts and credit cards than non-native Canadians. Via should take that into account, says the Assembly of First Nations. “VIA Rail would be wise to phase-in such a change, over a few years, to ensure all their clients are prepared,” the organization said in an email. “We are concerned for people who need to access food for medical reasons, for example to alter their blood sugar due to diabetes. VIA Rail must have a plan in place to ensure this new policy will not result in negative impacts to customers who do not use debit or credit cards.”

NDP MP Charlie Angus said he is concerned, both because people without credit cards may find themselves in a difficult position on long trips, and because the trend to cashless transactions is forcing people to use credit. “When you’re poor and they offer you those cards, you’re paying almost loan-shark rates to pay back,” he said. “If that’s the only way you can financially engage, then you’re going to be stuck to the digital company store for the rest of your life.”

Sylvain Charlebois, a Dalhousie University business professor who studies food, says Via should reverse its decision. “As we embrace new technologies, we also have to think about people who may be left behind as a result of their socioeconomic status,” he said in an interview. Charlebois said governments should pass laws to block businesses that sell food from going cashless, because having access to food shouldn’t depend on having a bank account. “This is a food security issue, access to food. I honestly don’t think businesses should be given a choice.”

Via says the move was made to “optimize frontline operations.”

Transport Canada, which is responsible for overseeing Via, says the railway’s decision “to a cashless system is an operational decision within VIA’s purview.”

“The Government is sensitive to the situations some Canadians could be experiencing,” said departmental spokesperson Frédérica Dupuis in an email. “It is our understanding that VIA gift cards can still be purchased with cash at a VIA ticket counter and that cash is still accepted on the Canadian and on the Churchill line.”

There is a feeling of inevitability about this trend. For most of us, electronic payments are convenient, and we can just tap our cards to pay for what we want. It’s up to politicians to remember, though, that most isn’t the same as all, and think about those of us who will end up being denied services available to the rest of us just because they are poor.