Michael Geist: Below the surface of the Liberal government's effort to crack down on big tech lies an even bigger threat—the implications for free speech in Canada 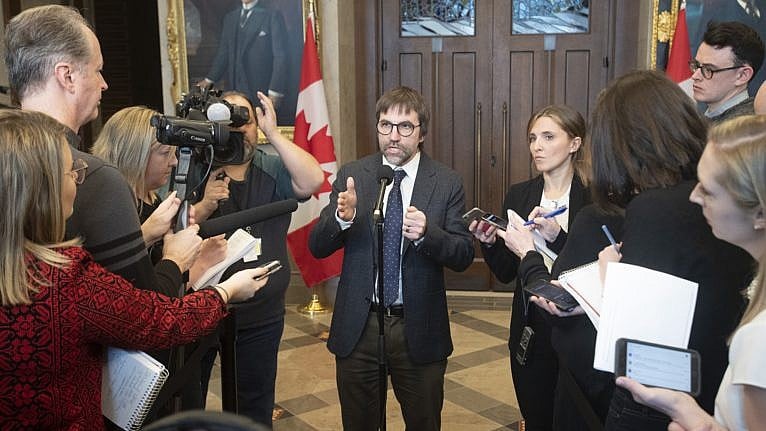 Guilbeault speaks with the media in the foyer of the House of Commons on Feb. 3, 2020 (CP/Adrian Wyld)

Michael Geist holds the Canada Research Chair in Internet and E-commerce Law at the University of Ottawa, Faculty of Law

Government legislation tends to attract a wide range of responses. Some bills grab the spotlight and become sources of heated debate for months, while others fly under the radar screen with few Canadians taking notice. Until recently, Bill C-10, the government’s Broadcasting Act reform bill, fell into the latter category. Introduced last November as part of Canadian Heritage Minister Steven Guilbeault’s mission to “make web giants pay”, the bill was steadily and stealthily working its way through the Parliamentary process with only a few days of “clause by clause” review left before a final reading and vote in the House of Commons.

Yet last week, the bill was thrust onto the front page of newspapers across the country with the public seizing on an unexpected change that opened the door to government regulation of the Internet content posted by millions of Canadians. The change involved the removal of a clause that exempted from regulation user generated content on social media services such as TikTok, Youtube, and Facebook. The government had maintained that it had no interest in regulating user generated content, but the policy reversal meant that millions of video, podcasts, and the other audiovisual content on those popular services would be treated as “programs” under Canadian law and subject to some of the same rules as those previously reserved for programming on conventional broadcast services.

The backlash undoubtedly caught the government by surprise, particularly since the policy change garnered little discussion at committee. As the public concern mounted, Guilbeault retreated to his standard talking points about how the opposition parties were unwilling to stand up to the web giants. The arguments fell flat, however, since the new rules were directly targeting users’ content, not the Internet companies. Further, the public reaction pointed to a government increasingly out-of-step with the public, which may support increased Internet regulation, but not at any cost.

The fact that the Liberal government was open to regulating millions of TikTok and Youtube videos was a reminder of how unrecognizable its digital policy approach has become in recent years. The party was elected in 2015 on a platform that promised to entrench net neutrality, prioritize innovation, focus on privacy rather than surveillance, and support freedom of expression. Most of those positions now seemingly reflect a by-gone era.

It is still anxious to demonstrate its tech bona fides, but now progressive policies appear to mean confronting the “web giants” with threats of regulation, penalties and taxes. Cultural sovereignty has replaced innovation as the guiding principle, which has meant the Minister of Innovation, Science and Industry (ISI) has been replaced by the Minister of Canadian Heritage as the digital policy lead.

And so for the past 18 months, Guilbeault has been handed Canada’s digital policy keys. In Guilbeault’s eyes, seemingly everything is under threat—Canadian film and television production, a safe space for speech, the future of news—and the big technology companies are invariably to blame.

Few would dispute that an updated tech regulatory model is needed, but evidence-based policies are in short supply in the current approach. For example, the use or misuse of data lies at the heart of the power of big tech, yet privacy reforms have been curiously absent as a government priority. Indeed, Bill C-11 was promoted by Prime Minister Justin Trudeau last November as legislation to give Canadians greater control over their personal information, but under newly named ISI Minister François-Philippe Champagne, it has scarcely been heard from again.

The government has similarly done little to address concerns about abuse of competition, the risks associated with algorithmic decision-making, or the development of a modernized framework for artificial intelligence. Years of emphasis on the benefits of multi-lateral policy development and consensus-building were unceremoniously discarded in the recent budget in order to commit to a digital services tax in 2022 that could spark billions in tariff retaliation. In fact, the U.S.-Canada-Mexico Trade Agreement that the government trumpeted as a major success story restricts Canada’s ability to even establish a new liability regime for technology companies.

With many of the most important policy options either foreclosed or ignored, the government has instead placed its largest bet on Guilbeault’s promise to take on the web giants through a three-headed policy approach: broadcast regulation, online harms rules, and mandated payments for linking to news articles. While Guilbeault argues that the common thread between these initiatives is countering the big tech threat, scratch below the surface and the real commonality—as well as the bigger threat—is the implications for free speech in Canada.

The free speech risks associated with Bill C-10 have now become common knowledge. Despite a warning from Heritage officials that removing the safeguards on user generated content for Internet companies would mean that “all programming on those services would be subject to the Act”, the government went ahead and voted to give the CRTC extensive regulatory powers over the everyday communications practices of an entire generation.

But the problems with Bill C-10 don’t end there. Guilbeault has consistently made questionable claims about the content of the bill and how it compares to other jurisdictions. He told the House of Commons that the bill contains economic thresholds (it doesn’t), that it excludes news (it doesn’t), that it won’t affect Canadian ownership requirements (it will), that the entire process will be completed by the end of the year (it won’t), and that it is similar to the approach implemented in Europe (it isn’t). These are not inconsequential misstatements.

Bill C-10 may have stirred up public opposition, but it isn’t likely to even be Guilbeault’s most controversial bill. That award goes to the much-delayed online harms legislation, which Guilbeault promised to introduce months ago. He initially talked about his desire to combat all manner of online harms, ranging from hate speech to “hurtful” comments, but the scope of the bill has been gradually dialled down, with the emphasis now on illegal speech such as child pornography and terrorism content.

Since that content is already illegal, new legislation may be of limited utility. However, Guilbeault has promised that his legislation will target content and Internet sites and services anywhere in the world provided it is accessible to Canadians. The obvious implications—much discussed in Internet circles in Ottawa—is that the government plans to introduce mandated content blocking to keep such content out of Canada as a so-called “last resort”. This suggests requiring Internet providers to install blocking capabilities, creating new regulators and content adjudicators to issue blocking orders, dispensing with net neutrality, and building a Canadian Internet firewall. If Canadians are unhappy with regulating user generated content, wait until they see the higher Internet bills that result from funding new content blocking equipment.

If that wasn’t enough, his forthcoming bill is also expected to mandate content removals within 24 hours with significant penalties for failure to do so. The approach trades due process for speed, effectively reducing independent oversight and incentivizing content removal. Just about everyone thinks this is a bad idea, but Guilbeault insists that “it is in the mandate letter.” In other words, expert opinion and the experience elsewhere doesn’t matter. Instead, a mandate letter trumps all. If this occurred under Stephen Harper’s watch, the criticism would be unrelenting.

In fact, one of the reasons that the government finds itself committed to a dubious policy is that it did not conduct a public consultation. Guilbeault has admitted the public has not been consulted, which he has tried to justify by claiming that it can participate in the committee review or in the development of implementation guidelines once the bill becomes law. This alone should be disqualifying as no government should introduce censorship legislation that mandates website blocking, eradicates net neutrality, harms freedom of expression, and dispenses with due process without having ever consulted Canadians on the issue.

Further down the road lies part three of Guilbeault’s plan, namely making social media companies pay for news. Guilbeault has called linking to news articles without payment “immoral” even as he has bought advertising on Facebook and regularly links to news articles on his own feed. There is room for debate on whether payments are appropriate—media companies post articles themselves on the sites and benefit from referrals, while Facebook only posts brief excerpts rather than entire articles—but there is no doubt that the government intervention has stalled the possibility of negotiated solutions. Moreover, Guilbeault’s close alignment with the media sector has made some reluctant to criticize the minister, providing a paradigm example of the free speech risks that can come from government intervention in an independent press.

When looking at the shift in the government’s approach, I recently lamented that it has become the most anti-Internet government in Canadian history. That may have once been a badge of honour for Guilbeault, but after the Bill C-10 backlash and the public re-assertion of the importance of free speech online, there may be a significant political cost to being at odds with the views of millions of Canadian Internet users.