The time for Trudeau to draw a line with Trump 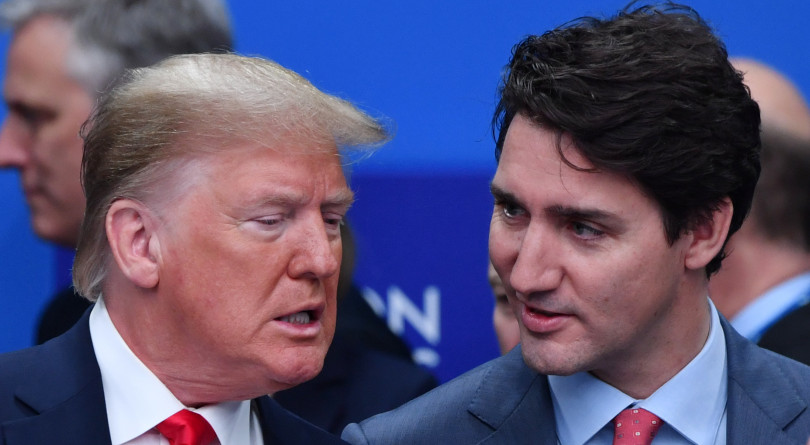 Trump talks with Trudeau during the plenary session of the NATO summit in Watford, northeast of London, on Dec. 4, 2019 (NICHOLAS KAMM/AFP via Getty Images)

Last week, Trudeau told Canadians that trusted intelligence reports showed Flight 752 had been shot down by Iranian anti-aircraft missiles. He stuck close to his script. He gave no words to those demanding Canada join Donald Trump’s sanctions on Iran. He offered nothing to those asking if Trump’s escalations bore any responsibility for 57 Canadian deaths. Trudeau’s reactions focused on the loss of loved ones, Iran’s act and investigation involvement.

This week came a shift. “Tensions” and “escalation” were necessary conditions of the tragedy, he argued. But still, there was no mention of Trump or any specific, attributable escalations.

The Liberals have, from Trump’s early days, held to a communications policy of no criticism of the U.S. president.

That may soon become unsustainable. A moment of public divergence with Trump may be on the horizon. And the Prime Minister might be wise to prepare for events now—not simply respond to them later.

Some may comfort themselves about Trump, believing he’s an irrational and ignorant fool, sure to self-destruct. But there is a pattern. To Trump, deals like NAFTA, the World Trade Organization or the Iran nuclear deal aren’t crafted by the anonymous laws of economics or international diplomacy. They are deals cut by negotiators, carved out by power.

And so, Trump leverages power to near-explosive levels—breaking norms, hitting with illegal tariffs, breaking international law, lying, making fact-less accusations—to focus power onto an adversary and extract the deal he wants. And everybody is an adversary, including Canada. And we’ve not been prepared for that.

Trump broached NAFTA with soothing words about minor tweaks. Then, just before the bell rang to start NAFTA talks, he thumped us with illegal tariffs on steel and aluminum, labelling Canada a national security threat.

Trudeau and company had a plan, deploying warm diplomacy to Washington insiders. But as the notorious Mike Tyson once said, “Everybody has a plan until I punch them in the face.” And in the result, Trump got his concessions from Canada.

Trump inflicted more face-punching over the treatment of refugees. Trudeau’s plan was to welcome Syrian refugees. But shortly after his election, Trump put limitations on asylum eligibility, removed due process and spoke of the “very fine people” at a fascist rally in Charlottesville, Va., that resulted in murder.

Huawei CFO Meng Wanzhou was another blow. The extradition request combined with China’s arrest of Michael Spavor and Michael Kovrig gave Trump considerable leverage over Canada’s China policy. Now Trudeau hopes Trump will negotiate the freedom of Spavor and Kovrig. If successful, no doubt that, too, will come at a price to be paid to Trump.

Through it all, the strategy of silence has been maintained. Trade and diplomatic power can quietly erode without much notice.

But Trump’s focus on Iran may bring something different—not a quiet erosion, but a sharp and noisy choice between either going along to get along, or diverging. Trump has now suggested NATO forces become more involved in the Middle East. He’s called for more sanctions against Iran—a call Canadian Conservatives quickly echoed.

If Canada wants the option to diverge in the event these new Trump threats become real, Trudeau’s response can’t wait for the bell to ring. A leader who may need to diverge paths later needs to start finding the ground now.

He doesn’t have to say the T-word. But a leader of an aggrieved nation has every right and reason to talk about the safety of its people. To warn about tensions that lead to the deaths of innocents. About de-escalation. About peace.

That ground is worth standing on simply to recommit to Canadian values and honour flight 752’s victims. But it can also prepare ground for a sharp choice away from a president who–under impeachment and facing the electorate–may soon drag us deeper into his hellish vortex.