David Zarnett: What are we willing to sacrifice in exchange for faster downloads and self-driving cars? 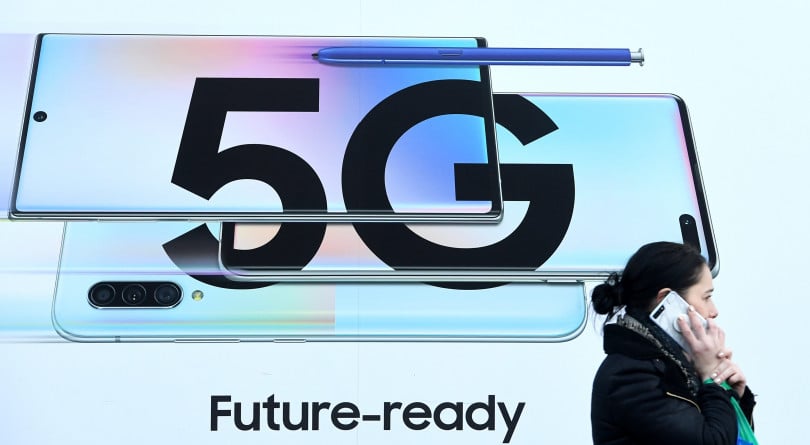 (A pedestrian walks past an advertisement displaying a 5G sign in London, Britain, on Jan. 29, 2020. The Government has decided to let the Chinese company Huawei to continue to be used in its 5G networks but with restrictions. (CP/EPA/FACUNDO ARRIZABALAGA)

David Zarnett is a lecturer and undergraduate advisor in the Department of Political Science at the University of Toronto. He has a Ph.D. in political science, and his current research focuses on Canadian policy on wireless technology.

Revolutions come with a lot of hype. Today, 5G revolutionaries at Bell, Rogers and Telus promise lightning fast download speeds, new and exciting technologies, thousands of new jobs, and billions in economic growth. They say that 5G will not only allow movies to be downloaded in seconds or self-driving cars, but also significant improvements to agricultural productivity, the quality of remote health care services, and the safety and efficiency of our cities. According to Robert Ghiz, the president and CEO of the Canadian Wireless Telecommunications Association, “5G isn’t ‘just another upgrade.’ It is truly revolutionary. The implications of 5G networks are significant and far reaching, not just for our industry, but for all Canadians.”

Marketing 5G as revolutionary, however, is a curious strategy. From Edmund Burke’s Reflections on the Revolution in France published in 1790 to more recent research in political science, it has been shown that revolutions can be costly—and they often leave the public worse off than they were before. Today, there is good reason to believe that the imminent 5G technology may come at a considerable cost to our security, environment, health and right over how public land is used. Understanding these potential costs is important. It will help the public develop a more nuanced view of 5G and it will assist policymakers in ensuring that the right measures are put in place.

A widely held concern is that if Huawei is allowed to build a 5G network in Canada, it will install “backdoors” that the Chinese government can use to steal sensitive information. Huawei has argued that it has no intention of spying on behalf of the Chinese state, but the Trump administration recently reported that they have concrete evidence that such backdoors exist.

MORE: What’s the worst China could do with access to Canada’s 5G network?

The security concerns with 5G, however, go beyond Huawei’s potential involvement. Regardless of which manufacturer builds it, 5G will dramatically increase the number of devices and vital systems connected remotely, known as the internet of things (IoT), thereby creating an extensive “network of networks.” Experts warn that this will result in hundreds of new access points that hackers can use to steal data or conduct cyberattacks.

A second cost from 5G may be to our environment. 5G’s expansion of IoT, including billions of connected devices, may mean a significant rise in energy consumption. A larger number of connected devices will result in huge increases in data that need to be stored in energy-intensive data centres, which are expected to emit more carbon than the international aviation industry. It also means an exponential increase in the number of wireless networks, which are energy-guzzlers (and estimated to be 10-times less efficient than wired networks). In 2015 alone, the energy used to power wireless networks generated approximately 30 megatonnes of carbon, the same as 4.9 million cars. Unless there is a dramatic shift towards renewable, carbon-neutral energy sources, 5G’s impact on energy consumption may undermine Canada’s ability to cut its carbon emissions and meet its Paris Agreement obligations, which it is already on pace to miss.

Additionally, no one knows what impact 5G frequencies and radiation intensities will have on our health. There are no published long-term studies on the topic. As one U.S. Senator put it, with 5G, “we’re kind of flying blind here, as far as health and safety is concerned.” For this reason, 273 scientists and doctors in the European Union have signed a declaration calling for all 5G rollout plans to be stopped.

Some suggest that 5G may increase the public’s involuntary exposure to radiofrequency radiation (RFR). According to Health Canada, as long as 5G radiation emissions do not exceed federal exposure limits, there is no threat to public health. However, the scientific merits of these exposure limits are hotly contested. A group of more than 50 international scientists has referred to Health Canada’s guideline as “fundamentally flawed,” and one expert has described them as a “disaster to public health.” Further, the most recent review of the exposure limits was seen by some to include too many scientists with “major links to the telecommunications industry,” raising concerns about conflicts of interest.

In contrast to the fears many have with Huawei, which are based on hypothesized scenarios rather than smoking-gun evidence, there is a large body of scientific literature dating back to at least the 1950s documenting harm from RFR. Most recently, a 2018 $30-million dollar study, conducted by the U.S. National Toxicology Program, found that radiation from 2G and 3G cell phones could damage DNA and lead to malignant tumours. According to the authors of a recent paper published in Environmental Research, there is now enough evidence to classify RFR as carcinogenic to humans. If we are to take a precautionary approach with Huawei, then surely a precautionary approach to health is warranted, too.

Lastly, 5G may challenge the public’s right to have a say in how public land is used. Unlike 3G and 4G systems, 5G will require a dense infrastructure of small-cell antennae placed on rooftops, lampposts and hydro poles. This is because it will use higher frequency radio waves that travel only short distances. It is estimated that 5G will require the installation of approximately 273,000 small antennae across the country.

Current regulations maintain that the public should be consulted for the building of a cell tower, but there are no such rights for the installation of 5G small-cell antennae (a “non-tower structure”), despite potential health risks. This means that telecommunications companies can install a small-cell antenna just metres from a bedroom window without public consent. In the U.S., the lack of local control over 5G antennae siting has become a hot-button issue.

5G revolutionaries promise a lot, and perhaps they will deliver. But, in light of the technology’s track record and mounting evidence of its potential costs, there are good reasons to be wary. 5G raises a number of concerns that require concerted public and policymaker attention.