Time for a moratorium on summits: The Trump Pause?

Scott Gilmore: The U.S. president is the badly behaved guest at the international table. As long as he's around, nothing will get done. 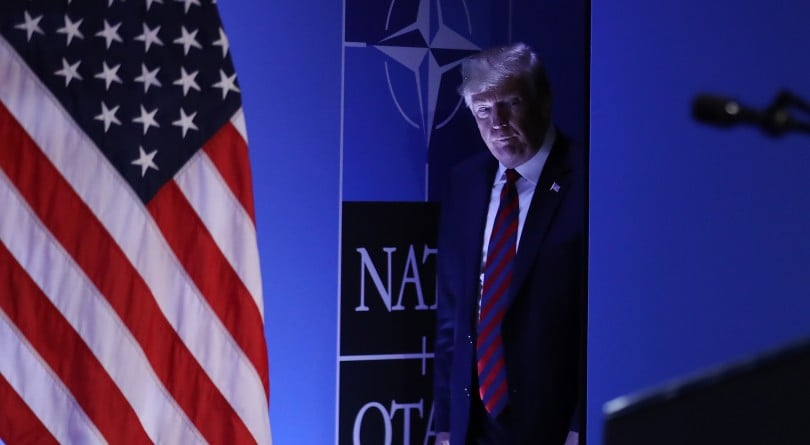 U.S. President Donald Trump arrives to speak to the media at a press conference on the second day of the 2018 NATO Summit on July 12, 2018 in Brussels, Belgium. (Sean Gallup/Getty Images)

Summits are meant to be useful. They require an incredible amount of effort: painstaking planning, detailed negotiations, expensive logistics and overwhelming security. And all of this is expended almost entirely in the expectation that the spectacle of the gathered leaders will convey an unequivocal message of unity or strength.

The NATO summit in Brussels not only failed to do that, it actually managed to make the alliance look fractured and weak. Like a one-man wrecking ball, U.S. President Donald Trump swung into town and smashed his way through meeting after meeting, leaving the other leaders frustrated and dismayed.

Trump began by ambushing Jens Stoltenberg, the Secretary General of NATO over breakfast. As the television camera’s rolled and as his own Chief of Staff John Kelly rolled his eyes, the president falsely accused Germany of obtaining 60-70 per cent of its energy from Moscow (it’s less than 10 per cent) and in an act of almost child-like transference claimed Germany was “totally controlled” by Russia.

On Trump’s second day he missed his first two meetings with leaders, forced an emergency session to demand higher spending rates among NATO members, emerged claiming they had agreed, only to be contradicted by French President Emmanuel Macron who promised no such thing had occurred. Just before leaving for the airport, Trump told the gathered media that he was a “stable genius”.

The wreckage Trump left in Brussels was strikingly similar to what he left behind at the recent G7 meeting in Canada. In fact, at every international summit he has attended, Trump has seized the headlines, derailed the agenda, and left a trail of disarray and confusion in his wake.

READ MORE: What Justin Trudeau had to say at the NATO summit

Imagine several people are coming together for a dinner party. One invitee is hoping to enjoy a good meal. Another is looking forward to chatting with an old friend. The host wants to show off his cooking skills. But one guest is coming with the simple intention of causing as much chaos and frustration as possible. Guaranteed, only one of these people will get what they want.

That is precisely what is happening now at NATO, the G7 and every other summit Trump attends. Unlike everyone else gathered, he arrives with the explicit intention of “flipping the table”, as he reportedly described it to his aides while en route to Brussels.

And, this is exactly what happened during the Republican nomination race and the U.S. election. Trump showed up with the intention of disrupting everything he could. Ironically, he succeeded so spectacularly because he was completely unhindered by the constraint of wanting to win.

According to several accounts, Trump never expected to take the GOP nomination—he was running simply to increase his brand awareness. Therefore, he did not hesitate to mock opponents he would never have to work with, lied without constraint and made promises he could never fulfill. Likewise, during the presidential race, he expected to lose, so he used the campaign to get himself into as many headlines as possible, presumably to raise stature and help his business interests.

Trump figured out how to hijack cable news by flipping over the table again and again. He is now hijacking international diplomacy the same way, and for the same ends: to either protect or promote his own nebulous personal objectives.

What those may be is subject to debate. Trump clearly wants to defend Russian interests for reasons as yet unknown. He wants to tear down international agreements such as NAFTA, WTO or the Paris Accord. And he likes to promote his own businesses.

But the usual goals of an American president are absent. Many of his positions and statements undermine his own country’s economy and trading status. And he takes decisions that weaken American security (like attacking NATO).

Which means that when Trump attends a summit, he is there to actively work against the interests of the other participants. He is the guest who comes to misbehave. And, if this were a group of friends, he would quickly be cut from the invitation list of future dinner parties, or those parties would just be cancelled entirely.

The western allies should consider taking the same approach. As it stands now, inviting Trump to a summit guarantees the event will not be useful, and in fact, will likely damage the common objectives. It makes no sense to expend so much time, energy and diplomatic capital to hold these meetings if they are actually going to do more harm than good.

For the remainder of Trump’s presidency, it would be expedient to simply stop holding these meetings. This seems like a radical step, but consider that any matter of substance is already being achieved at working levels. And, any matter of image or communication will surely fail if Trump attends.

Or, the hosts could opt to hold the meetings only at the ministerial level. For the most part, Trump’s cabinet, his Secretaries of State and Defence, are cooperative and high-functioning. They are capable of promoting American interests while simultaneously refraining from throwing mashed potatoes across the table.

So, ultimately, that is the trade off: Do we continue to invite the President to summits and hope that the damage is limited? Or do we snub him and hope it doesn’t increase his popularity among his increasingly deluded base? The Trump era has left the international community with some equally ugly choices.