To my teacher and friend: Despite everything, your guidance never wavered

"Though cancer stole any chance of us working as colleagues, you continue to be an inspiration," writes Matthew Pearson in this letter to his former teacher Mary McGuire 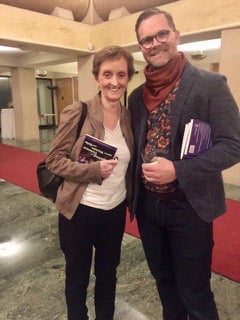 I still have the hand-written notes I jotted down in a three-ring Hilroy notebook on Jan. 8, 2008—the date of my first radio reporting class. You were the professor.

I arrived at grad school months earlier with a singular purpose: To become a newspaper reporter. By the time I entered your Carleton University classroom, I had already apprenticed at the Ottawa Citizen and was busily compiling my best clips in hopes of landing one of the paper’s coveted summer internships.

But you invited me into the world of radio, something I hadn’t given much thought to previously.

“Don’t think about what radio isn’t, but what it can be,” you told us that first day. I felt like journalism suddenly had a second dimension. Instead of just words on a page, I became keenly aware of how those words sounded when read aloud. Alliteration was out; short, precise sentences and sound clips were in. I was hooked.

Weekend newspapers soon piled up in a wicker basket on the dining room floor, ignored, as I spent my free time gorging on radio. I listened to all the documentaries and interviews you recommended, from Karen Levine’s Murder in the Neighbourhood to Barbara Frum’s infamous interview with a hard-of-hearing cabbage farmer. I rolled my eyes at the nightly As It Happens pun, fell hard for Ira Glass’ This American Life and could soon tell apart the voices and cadence of different news readers and correspondents. The radio in my kitchen was always on, just as I imagined it was in your kitchen.

Despite the seed you planted, I joined the Ottawa Citizen after graduation. At least it was your local paper, I recall you saying, so you could read my bylines every morning.

You were often quick with praise. I recall kind words for a story I wrote about the outpouring of support former MP Paul Dewar received following his diagnosis with brain cancer in 2018. I would later learn you were awaiting test results to confirm your own diagnosis of an aggressive form of uterine cancer.

I cannot fully grasp all the choppy waters you’ve navigated, yet through it all, your guidance never wavered — mentoring me through a transition from print to CBC Radio, including my stint at The House, a show you previously helped produce. You were a source of support again this past summer when I joined Carleton University’s School of Journalism and Communication. You wrote a letter of recommendation and coached me before the interview. I also inherited a small stack of your books, including The Art of Teaching. I cherish that your signature is in each of them.

Your faith in me helps steady the shaky confidence of a new professor, while your lesson on how to whittle an idea down to a sharp focus lives on in my classroom.

Though your illness stole any chance of us ever working in the department as colleagues, you continue to be an inspiration outside of the classroom, though lately the lessons I’m learning from you have taken on a graver quality.

I watched in late 2018 as you endured a gruelling wait for an invasive surgery, followed by round after difficult round of chemotherapy and radiation. Ever the astute journalist, you turned a critical eye to the Canadian medical system, warning me over tea and treats about its shortcomings and limitations.

Over the past few years, you’ve demonstrated how to be graceful, present and even gregarious despite the cancer cells inside you, having now spread to your lungs. How to let people take care of you, when you have quite capably taken care of yourself for so long. How to breathe and grieve at the same time.

Cancer may shorten the years you’ve got left, but the COVID-19 pandemic has made those years more fragile.

You feel physically well, you tell me all the time. You go for long walks, make sourdough bread and, all summer long, entertained guests on your patio.

And if it weren’t for this bloody pandemic, you could be travelling right now, perhaps not to Ireland as you originally hoped, but maybe back to Whitehorse, where you spent some good years working for the CBC, or Toronto, to see your son.

At the end of The Art of Teaching, Jay Parini writes of the dread he feels every April, when another group of students prepare to graduate.

“There is a little comfort in the fact that a handful of former students become friends forever, staying in regular touch,” he concludes.

FILED UNDER: Before you go Editor's Picks journalism