Trudeau apologized in Iqaluit. The media missed an opportunity.

Natan Obed: After the PM's emotional address, reporters cast Inuit aside to ask questions about SNC-Lavalin. This is where reconciliation falls short. 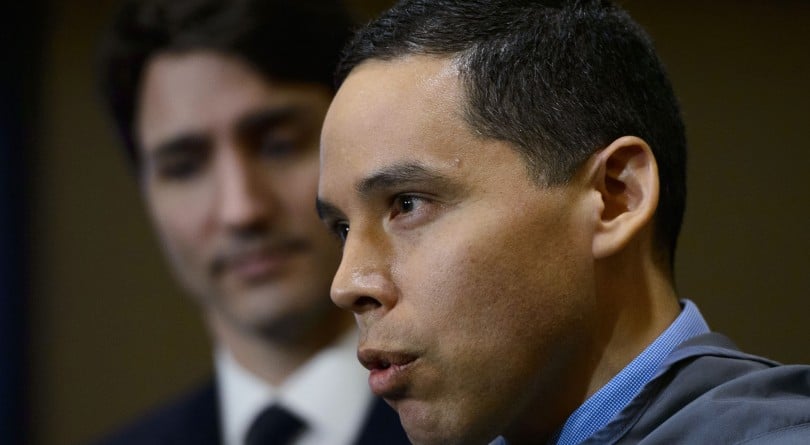 Prime Minister Justin Trudeau looks on as Natan Obed, President of the ITK, speaks during a press conference in Iqaluit, Nunavut on Friday, March 8, 2019. (THE CANADIAN PRESS/Sean Kilpatrick)

Read this article in Inuktitut here.

Apologies from the Government of Canada are important steps towards reconciliation between Inuit and the Crown. Federal apologies such as the apology last week in Iqaluit validate our experiences, and recognize the value and worth of the human beings whose basic dignity was cast aside by past governments, and can provide families with the closure they need to begin the healing process.

From this foothold of respect for us as Inuit and as Canadians, we can work to build programs and policy changes in the areas of housing, food security, education and access to medical care with the goal of eliminating social inequity, empowering our culture and our people, and ensuring that such atrocities are never allowed to happen again.

Last Friday I stood beside the Prime Minister of Canada at a press conference just half an hour following the incredibly emotional TB apology that was the culmination of 70 years of anguish and more than a decade of advocacy. Yet during the press conference, media cast Inuit aside, choosing instead to focus on questions surrounding SNC-Lavalin.

At the end of this short media availability, I asked journalists to consider their role in supporting reconciliation in Canada. I reflected afterward that only by government and media disinterest was it possible that this country was not aware of the human rights violations against Inuit. TB sanatoriums were in plain sight in southern cities like Edmonton, Winnipeg and Hamilton. Great mobilization efforts were undertaken that spanned most of the country, but almost without a word.

READ MORE: As Nunavut turns 20, Inuit rethink their own governance

I thought of how many Inuit had gone in search for their lost loved ones in the south, following vague leads through cities and towns, from graveyard to graveyard, trying to find their loved ones.

It seems as if there has always been a more important story to tell than the stories of human rights violations against Inuit. In the case of the mistreatment of the tuberculosis epidemic, I can’t help but wonder how the lives of so many Inuit might have been different if the media had pursued with dogged determination the stories of infants torn from their mothers arms, mothers taken aboard ships without being able to say goodbye to their children, children sent back to the wrong community after treatment, the way they pursue the stories that dominate our headlines today.

I have worked with a number of journalists—in the North and in the South, a growing number of them Indigenous—to share perspectives related to Inuit self-determination. But few of the journalists I have encountered fully understand or recognize the role that they have to play in building reconciliation between the Crown and Indigenous peoples. The Truth and Reconciliation Commissions 94 Calls to Actions addressed this in a small way—calling on the federal government to invest in CBC, for APTN to continue its work, and for journalism schools to teach students Indigenous history.

We have noticed some improvements in how Indigenous and Inuit stories are covered in the media, and have heard a lot of goodwill and intentions about wanting to improve further. Many gaps remain and it is through identifying and addressing these gaps that we can fully leverage the positive and impactful role media can to play in advancing reconciliation.

Reconciliation among media involves changes to institutions in the same way that reconciliation with government will come about through broad, systemic change. No single event or story will bring about these changes. They will only be fulfilled through the concerted efforts of reporters, but also producers and decision-makers, and even media consumers, to do things differently one day at a time.

MORE ABOUT TRUTH AND RECONCILIATION: