Trump trashing NATO isn't important—what the alliance does next is

Scott Gilmore: Washington has dropped the ball, but Canada and the EU is capable of picking it up and making this summit a milestone in history 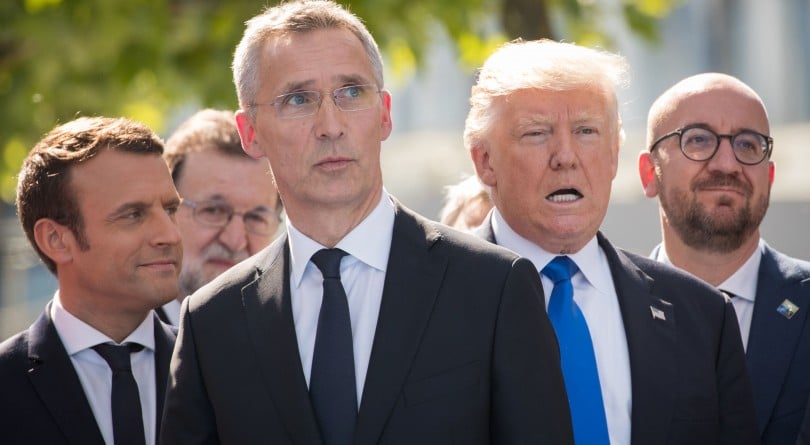 NATO is meeting this week and it may be one of the most important international summits since Gorbachev and Reagan met in Reykjavik 32 years ago.

Summitry is a strange thing. We see these meetings as just a standard element of international diplomacy, but in truth they are anachronistic ceremonies. One thousand years ago, before video calls, before email, before faxes, before diplomatic pouches, before safe roads, kings and princes would trek long distances to meet face-to-face to resolve an issue in days rather than the years it could otherwise take.

It is true personal meetings will always be a useful way to cement relations between leaders. Nonetheless, any agreement that is being announced at a summit has already been almost entirely worked out beforehand by email and telephone calls among officials.

So, why do they still meet? Habit and custom, yes—but also for the visual display it provides. For some politicians, standing on stage with other NATO leaders reinforces the idea that they are not mere men, but “statesmen”, worthy of your trust and your vote. And, collectively, it allows the gathered nations to “send a message”. That message often is a variation on the theme of “we are united and strong”, whether it’s the meeting of a trade pact, a regional gathering or a military alliance, like this one.

Alas, before President Trump even boarded his flight to Brussels, he managed to ensure that this message will not be believed, no matter how closely the NATO leaders stand together on stage.

As an aside, I have grown to respect Trump’s preternatural ability to cause confusion and discord. It’s incredible to think that with just a few short tweets he has completely undermined decades of alliance work, with its exhaustive international cooperation, and trillions of dollars of military effort.

It is tempting to say that if just a little social media trolling was able to do this much damage, then NATO itself was weak. But Trump’s track record for causing similar harm to NAFTA, America’s reputation, the EU, Congress and the entire executive branch proves (I believe), that he is a historical force so unique and so disruptive, there is no modern comparison short of the four mid-century horsemen of Stalin, Tito, Hitler and Tojo. (And, no, I am not saying Trump is Hitler. Rather, we have to go back that far before we find other world leaders who were able to shake up the international order this badly.)

READ MORE: Why Turkey, not Trump, is the NATO wildcard

But here we are, Trump is en route to the NATO summit, and before he has even arrived the alliance is tottering. He has continued to complain that the other members are taking advantage of the United States by not spending enough on defence. He has argued that it is “worse than NAFTA”, implying that instead of protecting America, NATO hurts it. And, for good measure, he has picked fights with individual leaders within the alliance, including Germany’s Angela Merkel, France’s Emmanuel Macron, and on occasion the United Kingdom’s Theresa May.

Trump is right about some of this. Europe and Canada, by any measure, do not spend enough on defence spending. But, on everything else, he is abjectly wrong—the sort of wrong usually only witnessed during the first few weeks of an undergraduate class on international relations. I am not going to replicate the columns of hundreds (!) of other writers around the world, both conservative and liberal—suffice to say, NATO works. It’s useful. America benefits.

Back to the summit. What will be important is not the spectacle of Trump stomping on NATO, bilateral relations or individual leaders as he cranes to see if Putin is watching. No, it will be what we, the rest of the alliance members, do next.

Some member states have already increased their defence spending, but Canada and others need to follow suit. Not to prevent more stomping, but to recognize the western alliance is actively threatened by Russia and can no longer rely on the United States to lead.

The European Union and Canada, combined, have more people and a larger economy than the United States. Washington may have dropped the ball, but the rest of the alliance is entirely capable of picking it up.

If they do, then this will be a summit that transcends ritual and becomes a milestone in history—the moment when the center of gravity in the western alliance drifted eastward across the Atlantic for the first time since 1941. This will mean a stronger Europe, a more resilient western alliance, and a better shot at containing Putin.

If they don’t, then history is going to head in a very different direction, one that sees the relative decline of Europe, the rise of Moscow, and potential knock-on effects that could completely upend the international order that has maintained western stability for 70 years. As I said, this may be that rare thing—a genuinely important summit.