Andrew MacDougall: Social media has painted us into an awful corner where truth never catches up to the lie and emotion only ever ratchets up 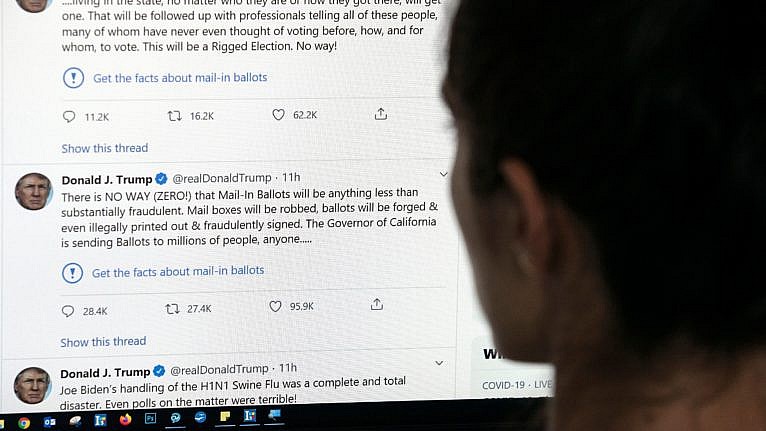 An editor in Los Angeles looks at the official Twitter account of U.S. President Donald Trump on May 26, 2020 (AFP via Getty Images)

On the day Jack Dorsey and his mates invented Twitter in 2006 they probably didn’t imagine that one day President Donald J. Trump would be using it to promote baseless conspiracy theories to his 88.9 million followers after a failed bid for re-election.

I mean, where to begin? An American president using their technology? That president being the Apprentice guy? With 88.9 million followers? And using it to promote conspiracy theories? Wasn’t this funky 140-character platform just a tool to tell our friends what we ate for lunch?

And yet, here we are, with Donald Trump barricaded in the Oval Office watching reality slowly eat his lunch.

Despite congratulatory calls to President-elect Joe Biden from allies around the world (and enemies like China) and court losses stacking up like pancakes at the IHOP, the outgoing president and his lawyers are busy floating every insane voting conspiracy theory being peddled to him on social media by sycophantic followers and right-wing media outlets. And while it’s insane to imagine that such a sentence can be written about a Western democracy, let alone the most powerful country in the world, it now also feels like par for the course, such is the flagrant norm-busting of the president and his administration. As the president told NBC’s Savannah Guthrie regarding his views on conspiracy theories in the latter stages of the campaign: “I’ll put it out there, people can decide for themselves.”

As far as weapons of mass democratic destruction go, you couldn’t possibly ask for more. At present, the Oval Office is walled in tinfoil, most of it earnest. So spare a thought, please, for all of the hard-working Soviet disinformation artists of the Cold War era. For they spent decades trying to discredit the enemy by floating conspiracy theories like ‘the United States created AIDS to target its black population’ in the English-speaking press of non-aligned nations, when all it turns out you had to do was give the West unlimited connectivity to make itself go mad (something, by the way, the Russians are now adept at enabling online).

Twitter might not be real life, but a whole lot of the real world reads up on America via social media. And for the past month the entire world has watched as the United States has fully fragmented into two realities thanks to the technological Trojan horses it gifted itself. One would like to imagine people like Dorsey and Mark Zuckerberg are watching in horror. Then again, there’s too much money to be counted.

And while grizzled Republican operatives might be tempted to let the entire ‘legal’ s–tshow ride in the hope of placating the giant man-baby in the White House, they would do better to try and put the genie in the bottle. The people who are resistant to reality might be on their side now, but the day will come when the ‘Don’t Tread on Me’ shoe is on the other foot. To wit, the MAGA revolutionaries are already after the ‘liberals’ of Fox News for having the temerity to begin reporting the new Biden reality.

But then again, what is reality? This is the awful corner into which social media has now painted us. We’ve always had differing opinions but we’ve mostly held onto the same set of facts. Now we’re witnessing what happens when people have access to their own facts. Every time a conspiracy theorist shares footage of vote stealing that turns out to be nothing more than a television crew loading their camera gear into their van a little part of democracy dies. Thanks to technology, the truth now rarely, if ever, manages to catch up to the lie. Even worse, admitting an error is now equivalent to apostasy. The emotion around our debates only ever ratchets up.

And if this decline in standards doesn’t have you freaked out enough already, there is a whole new cesspit opening up in the darker fringes of the web. New entrants like Parler are now hosting the bits of the conversation that Twitter and Facebook want no part of. If you want to know why a Toronto-based company called Dominion Voting has been forced to place a fact-check on its media contact page, look no further than Parler, where even experienced journalists like Fox News’ Maria Bartiromo are indulging the fantasy that Dominion—powered, she claims, by “dirty Venezuelan and Cuban money”—helped to steal the election for Biden.

Bartiromo presents an interesting case study in the decline in our collective faculties. Once an award-winning business journalist—and a member of the Cable News Hall of Fame—Bartiromo is now a miasma of misinformation, more interested in hurting the president’s opposition than finding the truth. I think back to the days where she interviewed Stephen Harper at various global summits and wonder what happened.

Only we don’t have to wonder what happened. Social media happened. The algorithms happened. And now we have two communities that not only don’t speak to each other, they don’t even agree about what they’re speaking about.

It’s enough to make you want to flip Dorsey’s little blue bird back in his face.