'We refuse to accept fatal outcomes in police encounters as inevitable' 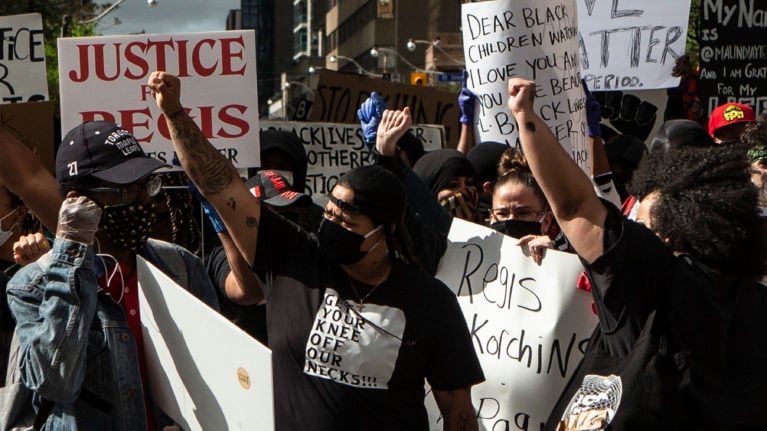 Demonstrators take part in a rally protesting the death of Regis Korchinski-Paquet in downtown Toronto, Saturday May 30, 2020. Korchinski-Paquet, 29, fell from the balcony of a 24th-floor Toronto apartment while police were in the home. THE CANADIAN PRESS/Chris Young

Regis Korchinski-Paquet was 29 when she died. Her family called 911 for help; instead, Regis joined a long list of Black people who called the police for help and died in the encounter. For Black people in mental health distress, police interactions overwhelmingly end fatally.  Our communities know that anti-Black racism and policing are a deadly combination for Black people. We should all be troubled by the repetition of this story time after time.

Black people everywhere are keenly aware that for us, calling for help often means risking death from those sanctioned by the state to “serve and protect.” Regis’s death is being investigated by the Special Investigations Unit, an entity established after Albert Johnson was killed by police officers and Black people boldly protested police handling of the case. As we call for justice for Regis Korchinski-Paquet, the wicked irony of the SIU’s involvement in this case is not lost on us.

We are angry and traumatized by these ongoing deaths. As we call for transparency and accountability in the death of Regis, we push back on systems and structures that too often make invisible the deaths of Black women, Trans people and gender non-conforming people. We cannot turn away from the misogynoir (misogyny directed toward Black women where both race and gender play a part) that has characterized reporting about Regis’s death and the silences it creates. This week, we feel the pain and the rage of anti-Black racism and misogynoir afresh. It’s a wound that keeps opening and it takes a psychic toll.

We draw on the words of feminist poet Audre Lorde who wrote that “Anger is an appropriate reaction to racist attitudes, as is fury when the actions arising from those attitudes do not change.” She spoke to anger as one of the tools Black women and racialized women have had to learn to use in order to challenge human rights abuses and spark change. Today we use our anger as libation for our fallen sisters; Black women and Trans people harmed through state-sanctioned violence.

We are already living through a trying time. We are in the midst of a global pandemic that disproportionately impacts Black people. Conditions created by generations of systemic and structural inequality mean that Black people are at greater risk of contracting and dying from COVID-19. The pandemic has intensified these dynamics and created a deadly storm. Emergency orders issued during the pandemic have expanded policing. We must be clear: increased policing hurts Black people.

Regis’s death and the effects of the ongoing pandemic on Black people everywhere make one thing clear, a radical change is needed in the underlying structures and systems that govern our lives.

We refuse to accept as inevitable fatal outcomes in police encounters.

We refuse to accept as unchangeable systemic inequalities that make health care inaccessible and mean that too many Black people only access mental health care when they are in deep distress.

We refuse to accept as normal systemic anti-Black racism that means Black people are more likely to live in poverty, face housing insecurity, face barriers in accessing education and are overly criminalized.

We refuse to accept as normal a world where our calls for justice are routinely dismissed and ignored.

The 39 recommendations of the 2017 Andrew Loku coroner’s inquest, which address race and policing with a focus on anti-Black racism, must be implemented by this government. There must be police accountability to the Black communities for this repeated pattern of the killing and death of our community members in their most vulnerable moments. The collection and reporting on the differential impact of the pandemic on Black lives must be implemented. The precarious employment conditions that make Black lives vulnerable to COVID exposure and economic recovery impossible must change.

Without justice, our struggle and resistance continue.