We're all the Sopranos now

Thirteen years after the TV show ended, the struggles it depicted have only intensified—the wealth gap more extreme, the abuse of our planet more obvious. In this time of crisis, The Sopranos reminds us how we got here. And what we don’t want to go back to. 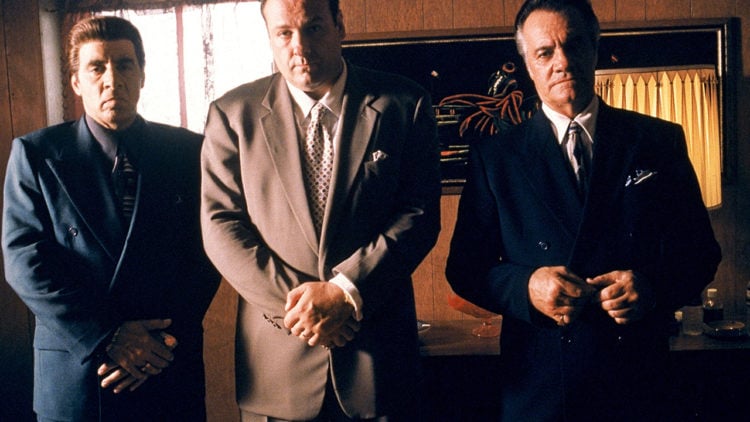 Aaron Giovannone is a writer and professor in Calgary.

In its original run from 1999 to 2007, HBO’s The Sopranos phenomenon garnered 21 Emmys, invented the genre of “prestige TV,” and introduced non-Italians to the wonders of baked ziti. Those of us who have a Pavlovian response to the opening bars of the theme song “Woke Up This Morning” or can’t help but hear Adriana’s “Christopha’!” in their head whenever they meet a new Chris, have been awaiting the prequel film, The Many Saints of Newark, which was scheduled for release later this year and features James Gandolfini’s son, Michael, as a young Tony Soprano. Unfortunately, the movie is being held back until 2021 due to the pandemic, so we’ll have to watch the original series again to get our fix. But that’s not a bad proposition right now, especially if you have an extra 86 hours inside the house.

With our lives upended by the coronavirus, The Sopranos is an especially rewarding show. Besides being brilliant satire and tantalizing melodrama, The Sopranos is a morality tale for the middle class, a sensationalized version of the personal, financial, and ethical dilemmas we face living under capitalism. Thirteen years after the show’s finale, these struggles have only intensified, with the wealth gap growing more extreme and the abuse of our planet more obvious. In these times of crisis, The Sopranos reminds us of how we got here and what we don’t want to go back to.

Mafia genre as critique of capitalism

In a sense, mafia films have always provided a critique of capitalism, beginning with the Depression-era classics Little Caesar (1931) and Scarface (1932), when the cruelties and dysfunctions of the system were obvious. During the economic crises of the 1970s, The Godfather (1972) and The Godfather: Part 2 (1974) depicted the American Dream and criminal enterprise as essentially one and the same. It’s a rationale that Tony Soprano has internalized, as is clear from the way he defends his line of work to his therapist, Dr. Melfi: “The Carnegies and the Rockefellers . . . the J.P. Morgans—they were crooks and killers too, but that was a business, right? The American Way?” Even more than other works in the mafia genre, The Sopranos shows us criminality woven into the fabric of everyday life, as we overhear Tony’s “respectable” neighbour Dr. Cusamano eagerly gathering insider trading tips at his own backyard barbeque.

The Sopranos, The End of History, and Capitalist Realism

The Sopranos debuted in 1999, on the heels of a moment dubbed “the end of history.” That was the concept put forth in a 1992 essay by political scientist Francis Fukuyama, who argued that after the fall of the Berlin Wall, humanity had reached the end point in its sociocultural evolution. The major ideological struggle between capitalism and communism which propelled the Cold War had been resolved, and capitalism had prevailed, supposedly bringing with it unrivalled personal freedoms. But this thesis came with a major downside for the culture that accepted it: What struggles would lend meaning to our lives now? Was the soulless acquisition of profit, or the hedonistic pursuit of pleasure, all that was left? This malaise is fundamental to The Sopranos, as voiced in the pilot episode when Tony visits Dr. Melfi for the first time: “Lately, I keep getting the feeling that I came in at the end. The best is over.” Dr. Melfi knows exactly what he means: “Many Americans, I think, feel that way.”

RELATED: Art during the time of coronavirus

In its purest form, the belief in the end of history instilled a mindset that cultural theorist Mark Fisher, writing in 2009, named “capitalist realism.” The 2008 market crash was revealing the irrationality and inequality of our economy, with banks and executives getting bailouts, and the rest of the population enduring austerity. Despite these obvious inadequacies of the system, Fisher found that for many of those living under capitalism, “it is now impossible even to imagine a coherent alternative to it.” We were trapped, not just materially, but psychologically. This mindset bears a striking similarity to a famous mafia dictum: “Just when I thought I was out”—to quote The Sopranos’ Silvio (Steven Van Zandt) quoting the Godfather III—“they pull me back in.” Silvio played the line for laughs, but that doesn’t make it any less true.

Too much to resist

Many of the characters in The Sopranos are trapped. Over and over they spurn opportunities to change as the fear of living without wealth, power or status prove too much to resist. We see this when Christopher decides not to enter witness protection with Adriana, despite her love being among the only pure sentiments in the show. In another example, Vito, one of Tony’s captains, flees to a small New England town after his associates find out he’s gay. While there, Vito lives happily out of the closet and falls in love with an ideal man, Jimbo. In the end, though, Vito takes off back to Jersey. “It was the f—ing life you couldn’t live without,” Jimbo excoriates Vito over the phone. “The gambling, the money, who knows what else.”

Carmela, Tony’s wife, is lonely and at times tortured in her marriage. In one of the most riveting scenes of the series, she visits a psychiatrist named Dr. Krakower who administers her a potent dose of straight talk: “You’ll never feel good about yourself, you’ll never be able to quell the feelings of guilt and shame that you talked about, as long as you’re his accomplice… Take your children, what’s left of them, and go.” Carmela’s profuse tears betray her guilt, but she doesn’t heed the advice, and she never returns to see Dr. Krakower.

Perhaps more than anyone, Tony lives within the bounds of capitalist realism. As the boss in charge of a murderous enterprise, Tony constantly weighs the value of a human life against the benefits that a death might bring, and his calculus grows fast and loose over the show’s run. Early in the series, Tony agonizes over what to do when one of his captains, Big Pussy, is suspected of being an FBI informant. But in the series’ final stretch, Tony is quick to consider murdering (with an axe!) another of his captains, Paulie, over what amounts to a joke gone awry.

RELATED: Books to spark or allay our fears in the time of the coronavirus pandemic

We understand that Tony’s devaluation of human life is criminal, but today we are witnessing a similar process in the debates about re-opening for business during the pandemic. Dan Patrick, the Lieutenant  Governor of Texas, claimed the elderly are willing to die for the sake of the economy, and later said, “There are more important things than living.” Cost-benefit calculations, with some death being an acceptable “cost,” occur under normal operations of the economy too, but the current crisis highlights the power dynamic underlying any such calculations. Just as Tony wouldn’t value his own life as cheaply as those of his victims, neither will politicians or pundits be required to put themselves at risk of the coronavirus to the degree they expect vulnerable workers to do.

Near the end of the series Tony is shot and nearly killed, and he experiences an elaborate dream as he lies in a coma in the hospital. These are controversial episodes in The Sopranos fandom, but to my mind they are among the best of the series for their artfulness and resonance. In his dream, Tony is an uncanny version of himself, a legitimate salesman at a conference in California. He endures a series of mishaps that make him question his identity, beginning when he picks up the wrong briefcase at the hotel bar and is left holding the wallet and I.D. of a stranger named Kevin Finnerty. “Is it possible,” Tony leans into the bartender, asking half-jokingly, “that I am Kevin Finnerty?” In the haunting final scene of his dream, Tony approaches a country mansion at night where the Finnerty family reunion is underway, hoping to retrieve his own briefcase. Tony sees the shadows of partygoers through the curtains, and catches a glimpse of someone resembling his mother, who has passed away. The doorman tells Tony he can’t go inside without first giving up the briefcase. “I lost my real briefcase,” Tony says. “My whole life is in there.”

Tony’s near-death experience feels particularly meaningful now as the coronavirus is a kind of society-wide memento mori. Far from family or friends, without work or wealth, little remains to distinguish Tony Soprano from Kevin Finnerty. He might as well be Finnerty. The family reunion Tony glimpses through the curtains—the shades of the dead—is a glimpse of the universal human condition: our mortality, which brings us together “as a family,” as it were. We’re all vulnerable to disease and death, although in an unequal society we experience that vulnerability in different measures.

When Tony awakens, he struggles and fails to arrive at this humanistic interpretation of his vision, but we shouldn’t make the same mistake. Many of us have lately been transported into a surreal world where we are isolated, distanced from friends and family, and stuck in a life we have difficulty recognizing as our own. While some are forced to work and be dangerously exposed to the coronavirus, for others employment has slowed or evaporated. To various degrees, we’ve put down our briefcases.

To quote The Sopranos’ Silvio again, two sectors of the economy are traditionally recession-proof: “certain aspects of show business, and our thing.” In the current climate, Hollywood is running out of content, and even organized crime is having trouble making ends meet. These truly are strange times. But in upending our individual lives, this crisis highlights our shared vulnerabilities. Perhaps it will quicken our sense of the common good, a necessary antidote to a world run for private profit.