Western separatism is not a serious option

Stephen Maher: Canada is the best country in the world, and no province is leaving. What is real is the anger and Justin Trudeau is ill-suited to deal with it. 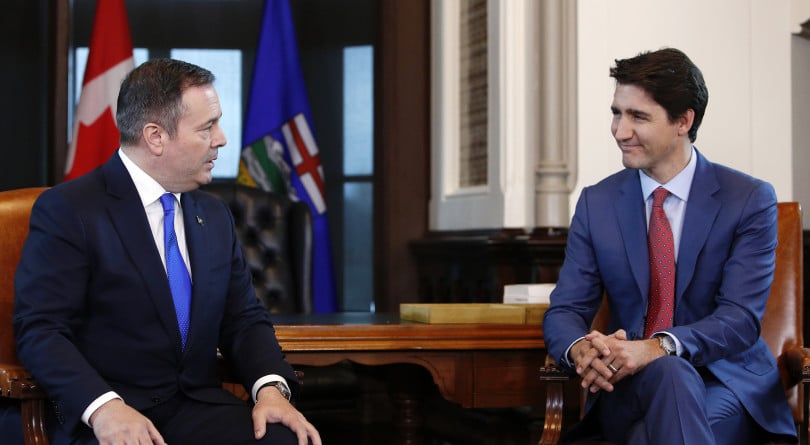 Kenney speaks with Trudeau on Parliament Hill on May 2, 2019 (David Kawai/Bloomberg via Getty Images)

There is no national unity crisis in Canada and a lot of the people who are yelling and waving their arms and saying that we have one should take a timeout and reflect on how lucky we all are to live where we do.

On Monday, Canadian voters made two clear decisions about energy and the environment, essentially endorsing the middle path that Justin Trudeau campaigned for in both 2015 and 2019.

The anti-carbon-tax pro-pipeline crowd seems to be having a hard time consoling themselves and accepting the will of the people.

New Brunswick Premier Blaine Higgs wisely announced that he would give up his province’s fight against the carbon tax, and Manitoba Premier Brian Pallister showed leadership, but premiers Scott Moe, Doug Ford and Jason Kenney are not for turning.

Moe was out first, the day after the election, angrily demanding that Trudeau respond to the frustration and alienation in Western Canada by getting rid of the carbon tax that voters had endorsed the day before. “There is a fire burning here in the Prairie provinces and what I am doing handing the prime minister this letter is handing him a fire extinguisher, and I’m asking him not to show up with a gas can.”  Moe was not actually holding a gas can while he spoke, but he might as well have been.

Ford, who actually doesn’t have a dog in this fight, is nonetheless sticking with the losing side. In August, he said that he would drop his carbon tax challenge after the election. “This carbon tax, it’s not going to be the courts that are going to decide,” he said, then. “The people are going to decide when the election is held. Once the people decide, I believe in democracy, I respect democracy, we move on.”

On Thursday, though, Ford’s environment minister said no, the province is going to continue pouring tax dollars into a court challenge that looks doomed to fail.

When you think about it, Ford’s August statement doesn’t make much sense, because if he was going to drop the challenge come election time, why waste money and energy fighting it at all? Like a lot of things Ford says, it is likely best understood as soft soap, a rhetorical device, the kind of assurance a sticker salesman might offer in making a sale.

Kenney, who has a lot more at stake than Ford, delivered a much subtler, more interesting message, reflecting his delicate position. “I’m not going to let Trudeau push me out of my country,” he said. He acknowledged an emotional connection to Canada, and pointed out that separating wouldn’t build any pipelines. “Landlocking ourselves through separation is not a solution to the problem of a campaign to landlock Alberta.”

It is a measure of the frustration that Albertans feel that Kenney is talking about separation as if it might be a serious option. It is not. If Jacques Parizeau couldn’t convince Quebec—which actually could be a country—to go it alone, it’s hard to imagine someone leading Albertans over the ramparts. To where, exactly?

What this could do, though, and what Kenney must fear, is an ultimately unsuccessful separatist party that could cause short-term political headaches. Disgruntled elements from the old Wild Rose Party have got to be sniffing the wind and considering their options, waiting for a by-election.

Kenney, who speaks French, knows Quebec and was a member of the cabinet that set up our current equalization system, likely has no choice but to hypocritically complain about it now, lest he lose the part of his party that he needs to stop the NDP winning the next election. That means there will be a lot of yelling and arm-waving, which could irritate Quebecers, inflaming tensions, but there is no reason to expect we will return to the terrible brinksmanship that almost destroyed our country in 1995.

Then, as now, I want to tell people: It is not assured that Canada will always be boring and well-governed. Yugoslavia, for example, was once a peaceful, multicultural federation. It is on Trudeau to calm the waters, a job for which he seems uniquely ill-suited.

Trudeau is the lightning rod for Western anger, an eastern bastard that many Albertans would like to see freeze in the dark. He has a clear mandate to continue on the middle path on climate and energy, but he should do so, insofar as possible, without provoking the good people of Saskatchewan and Alberta, who feel like cash cows being gouged by people who disrespect them.

Trudeau might be wise to emulate Stephen Harper, who managed to govern Quebec without needlessly inflaming tensions, usually by maintaining a respectful distance.

Trudeau needs to restrain his natural exuberance, avoid dressing up or making jokes, stop mugging for cameras in distant capitals and avoid sanctimony when he praises feminism and diversity.

He won this election by the skin of his teeth, thanks to the votes of a lot of people who cast their ballots reluctantly. Many of the people who voted against him are furious to see him still in charge.

There is no national unity crisis, and every prospect of a long, productive minority, but Westerners are angry and Liberals should take great care not to give them reasons to get angrier.