Tabatha Southey: Sometimes there's no way to keep a safe distance. How about converting road space into walking space and keeping the parks open and the lights on. 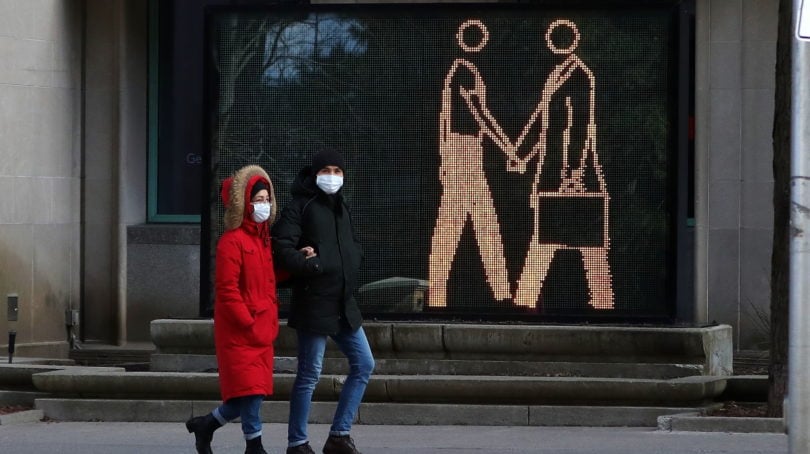 I go out once a day and watch my city learn to walk and yes, I feel that same tender pride a mother feels when their child, anxious but determined, takes those first steps, and of course in watching this I learn a lot myself.

The effort being made in the sidestreets around my neighborhood to master the new physical distancing rules is considerable. Mostly I see great care being taken to maintain a two-metre gap between individuals who do not live in the same home, but it’s not easy. Toronto is not built for this. The sidewalks are narrow and they go, business like, from here to there. “There,” one often feels it is assumed, being your car, if you are anyone of any significance at all.

These routes are made for walking, not promenading. Living in Toronto one could get the impression that walkers don’t get to vote and knocking them over with your car gets you an extra vote. I sometimes drive through posh Rosedale. I swear, there is an unwritten rule there that, if one absolutely must stop—because several cars have reached the intersection at the same time, certainly not because there is a stop sign (these are largely dismissed as rumour and innuendo around here)—the nicest car gets to go first.

On the busier streets around town the social (distancing) contract falls apart. Even if there weren’t lines outside the banks and those stores that are still open, there is no way to walk and maintain the legal, safe distance in the space allotted to us and no, not everyone is pulling their weight. Of note the people wearing masks are the worst in-your-face offenders.

One finds oneself wondering, “Who was that masked man?” just before one thinks, “I guess I’ll never know, but he was a total dick.”

The impression left by much of Canada’s press is that the government was threatening your health by not advising you to wear a magic hanky over your face, and by all means do don a hanky if you feel inclined. It may go some ways towards doing what a hanky is intended to do, which is stop you from dripping everywhere. In some countries, wearing a mask is considered a courtesy, almost a nicety, like a dandy handkerchief. Worn properly, your mask may help slow the spread of the coronavirus, which you are perhaps asymptomatically schlepping around, but it is, at the end of the day, pretty much just a hanky.

A mask won’t enhance your handwashing abilities or increase your social-distancing powers, which is where your real strength lies. The government has not been sitting on stockpiles of Wonder Woman’s belt just to spite you.

Masks do, however, have the power to make you touch your face. Don’t touch your face. A mask may also give you an irrational sense of invincibility and cause you to behave irresponsibly and in a socially inappropriate manner. Masks, it seems, are one hell of a drug.

Some cities have begun experimenting with accommodations that acknowledge that people need to go outside, not a lot, but they do. Perambulatory prohibition, while it may be temporarily prudent, will ultimately fail. Local governments are going to have to accept that educating people to do the right thing and then giving them the resources they need to do it—in this case, they need space—is the only way this is going to work. You are your own stroll control board,

Yes, on the face of it closing down all the dog parks, even the very large, unfenced ones, as has been done in Toronto, is a sensible thing to do. Except the dogs are still here, because not everything is horrible, and they still need to go walkies. A lot of people walking their dogs on sidewalks for an hour to tire them out—just as parents are doing the same thing with their children—while couples are out for their daily run, likely makes less sense than allowing those same dogs to race around a now-empty field for the 25 minutes it takes to tucker them out there. Dog owners already navigate a complex system of rules and mores in the dog park, many involving humping and poo. A two-metre distance rule isn’t going to stump them.

We need to convert some road space into walking space and maybe leave the lights in the park on all night. Do the same at the running track for the midnight runners. We have long kept the streets open all night while, somewhat theoretically in Toronto, enforcing the laws designed to keep those spaces safe. When it comes to vehicular traffic we largely trust that the vast majority of us won’t drive around ramming into cars because, altruism well aside, no one wants to end up with their car in the shop. Pedestrian traffic deserves no less credit. No one wants to end up in hospital.

The challenge, now more than ever, is to find a way for our cities to be healthy. Cito, longe, tarde—“fly quickly, go far, return slowly”—was once solid plague advice, if the fate of those left behind wasn’t going to haunt you. The wealthy retreated to their country homes when the plagues swept through, in periodic waves as they did, and do, and will do again.

”Great fears of the sickenesse here in the City, it being said that two or three houses are already shut up. God preserve as all!” Samuel Pepys wrote this in his diary in April of 1665 before, no doubt going and making merry with Mistress So-and-So.

Eventually, the country house option proved largely unworkable. The public health option was given a shot but if it’s going to prevail, it cannot be based on the assumption that everyone who does not own a country house just doesn’t know what’s good for them and won’t learn and therefore must be punished.

Lower-income people rely more on public green space than do the wealthy. They’re not hightailing it to the cottage or playing in their oasis-like backyards. As we head into summer, there will be an understandable temptation to lock down all of our parks, as some cities have already done, but laws around public distancing will be unequally felt, even if they’re not unequally enforced, and that “if” isn’t just italicized, it’s six-foot-tall, neon and winking at you.

In the words of a Queen’s University student who has just completed his masters in geography on Toronto park use, “Parks are a vital public health resource everywhere but especially so in lower-income neighbourhoods,” said Basil Southey, who happens to be my son. “Not everyone can stay inside, and we need to ensure that when people do go out, they have the space to do so safely.”

Well, I wasn’t going to break quarantine to do this interview now, was I?

“So this kind of enforcement is going to harm marginalized communities more?” I asked.

“Exactly,”, he said. “There are areas with a history of over-policing and it is those same areas that will be hurt first by the loss of their already-limited greenspace and then by punitive fines.”

“Is there anything else you’d like to add.” I said.

“Great, we’re out of time, but one last thing before I let you go: will you take out the compost?” I said.