When will the Chinese government be held accountable for the spread of coronavirus?

Marcus Kolga: Canada will have to work with our allies to assess the Chinese government’s responsibility when it comes to the spread of coronavirus and to ensure that they are held to account where appropriate 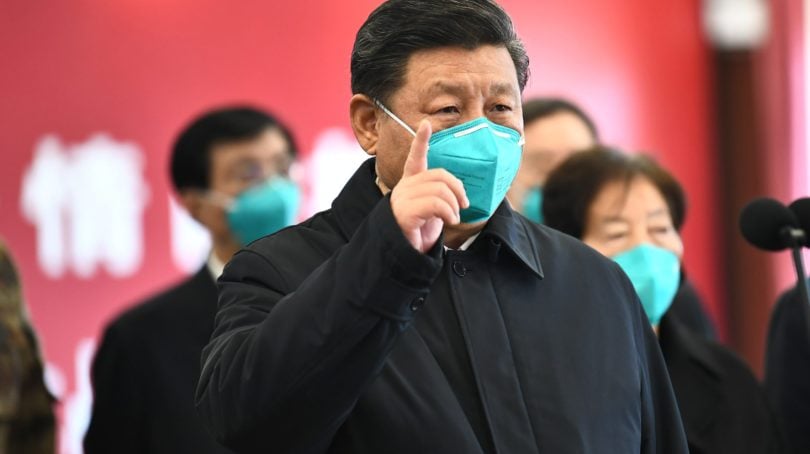 Chinese President Xi Jinping, also general secretary of the Communist Party of China Central Committee and chairman of the Central Military Commission, visits patients who are being treated and sends regards to medical workers who have been fighting the epidemic on the front line day and night, encouraging them to firm up confidence in defeating the epidemic, by video calls at the Huoshenshan Hospital in Wuhan, central China's Hubei Province, on Mar. 10, 2020. (Xie Huanchi/Xinhua via ZUMA Wire/CP)

On Sunday night, the two remaining Democratic Presidential candidates, Joe Biden and Bernie Sanders, entered a sparse CNN studio for a one-on-one debate, in which the venue, context, and substances were all unsurprisingly hijacked by the coronavirus pandemic. Among the top issues were how millions of Americans would endure economic stresses caused by the outbreak and what the United States government should do to overcome it, especially with the projected costs running into the trillions of dollars.

One of the debate’s most interesting moments came when CNN reporter Dana Bash asked the two candidates: “What consequences should China face for its role in this global crisis?”

Responsibility is exactly what the Chinese Communist Party government has been avoiding since the initial outbreak in Wuhan. Most notably, Dr. Li Wenliang raised concerns about the virus in December and was in turn detained by Chinese authorities and forced to sign a confession of making “false comments” and disturbing “the social order.” The virus would eventually take his life in February.

While Bernie Sanders might be forgiven for naively blurting out that “now is the time to be working with China,” the Chinese government has offered little evidence to suggest that closer cooperation would lead to a solution. Conversely, Beijing’s mishandling and negligence has directly enabled the spread of this pandemic.

China’s primary motivation throughout has been to avoid any responsibility or accountability by deflecting blame and suppressing criticism since day one. So effective has the Chinese campaign been that even foreign governments (including here in Canada) have remained largely silent about China’s role. The instinct of any totalitarian state like China is to cover up anything that might require them to take responsibility.

During the initial coronavirus outbreak, authorities in Wuhan stated that there was “no clear evidence of human-to-human transmission.” Yet, as first noted in a January study in The Lancet, more than a third of patients had no connections to the Wuhan food market, and people started to become ill weeks before the government would admit.

But the obfuscation goes deeper. Instead of informing its own people and the world, about the threat early on, the Chinese government contributed directly to the global pandemic we face today through politically motivated manipulation and active disinformation. By lying about the virus’s initial spread, including by not acknowledging human-to-human transmission when it was quite clearly happening, and by prioritizing political stability over human health, China’s actions directly led to the massive spread of the virus.

The first case of the virus likely occurred in mid-November, 2019. While identifying a novel virus of course takes time, Taiwan identified the outbreak and banned flights from Hubei before the end of 2019. By comparison, before China finally acknowledged the gravity of the situation in late January, some five million people left Hubei, allowing the disease to spread throughout China and the world.

To put a finer point on this: had China acted when Taiwan took action (when it was already apparent that a crisis was upon Wuhan),  the spread of the virus could have been reduced by some 95 per cent. While it is also true that many Western countries are failing in tragic fashion, thousands of lives, in China and around the world, would have been saved had China put aside its politics and acted swiftly.

Chinese authorities had this information and data but refused to release it in a timely manner, instead preferring an ever-changing narrative about the outbreak that made medical assessments on the coronavirus and its impact very difficult. Crucial weeks were lost that could have helped to contain the country-wide and later global spread of this virus.

Most recently, Chinese government propagandists have promoted a bizarre story about the outbreak in Wuhan being caused by the United States Army. This latest conspiracy, reported by Eto Buziashvili of the Atlantic Council, is seemingly inspired by the KGB’s Operation Infektion from the 1980s, which involved the KGB planting a story in a pro-Kremlin newspaper in India where it was claimed that HIV/AIDS was developed in a CIA laboratory in Fort Detrick, Maryland. The Russian disinformation campaign eventually metastasized within the U.S. media environment, eventually reaching mainstream U.S. national news in 1983.

Buziashvili reports that stories about the U.S. army introducing coronavirus in Wuhan were planted on pro-Kremlin platforms in January, and have since spread to fringe western pro-totalitarian conspiracy theory platforms, including one based in Montreal.  Those stories have since been amplified by Chinese government officials, including Zhao Lijian (the deputy director of Foreign Ministry Information Department) who posted it on Twitter, and further promoted by the Chinese Communist Party controlled social media platform, WeChat.

Such aggressive Chinese government disinformation about the coronavirus is being deliberately promoted to draw attention away from Beijing’s own responsibility for the global pandemic.

While Western governments must maintain their focus on addressing the immediate outbreak, we cannot allow the Chinese government to confuse and reframe our understanding of this pandemic and to manipulate the eventual reckoning that must occur once the threat ebbs.

The cost to overcome this pandemic crisis will be steep, regardless of the physical toll it imposes on our nation. In the coming months, Canada will have to work with our allies to assess the Chinese government’s responsibility and ensure that they are held to account where appropriate. This should include compensation for economic losses by Canadian workers, businesses and our government, and economic sanctions against any Chinese officials deemed negligent in failing to stop the outbreak in China.

Canadians, media and our government must continue repeating Dana Bash’s question, “what consequences should China face for its role in this global crisis?”