Who will be the next Tory leader? Ask Rona Ambrose.

Stephen Maher: The path is clearing for Peter MacKay. The one big thing standing in his way is the great hope of Western Conservatives. 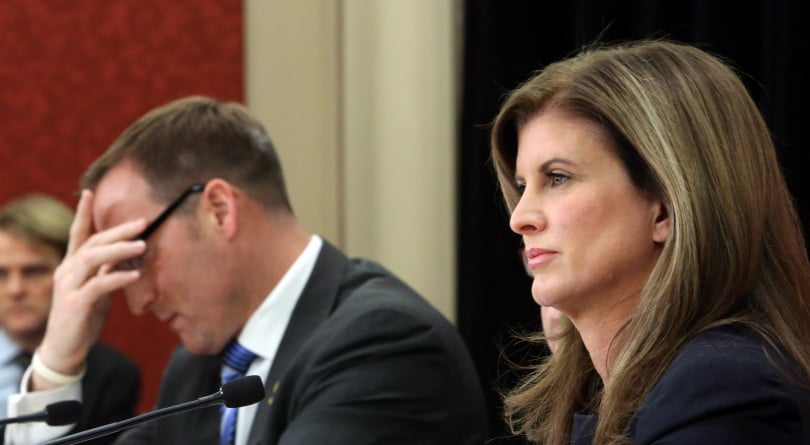 MacKay and Ambrose take part in a news conference about the purchase of F-35 fighter jets on Parliament Hill on Dec. 12, 2012 (CP/Fred Chartrand)

If Western Canadian Conservatives don’t want Peter MacKay to lead the party that Stephen Harper built, they need to twist Rona Ambrose’s arm, because otherwise MacKay is likely going to take over the party when Tories meet in Toronto in June.

In-house polling from several other camps shows MacKay with a double-digit lead on Pierre Poilievre and Erin O’Toole, which means he is likely to win if Ambrose stays out.

A lot can change in a six-month race, but MacKay has such a commanding lead that former Quebec premier Jean Charest is likely going to decide to stay on the sidelines.

Charest, one of the cleverest politicians of his generation, badly wants to run, and he would be a formidable opponent for Justin Trudeau. He would offer centrist voters the opportunity to get rid of the Liberals without putting social conservatives and fossil fuel lobbyists in the driver’s seat.

But the westerners who built the Conservative Party do not want to surrender it to a Montreal Liberal who supported the gun registry and is getting paid to advise Huawei.

Stephen Harper peremptorily moved to stop Team Charest this week when the former prime minister stepped down from the board of the Conservative Fund and sources told Paul Wells that he was doing so to free himself to oppose Charest.

Harper is wise to wash his hands of the fund, which he has controlled, along with former senator Irving Gerstein, since the party was founded. A new leader will no doubt have observed that if Andrew Scheer had put in people loyal to him in charge of the board, he might not have had to quit suddenly when it was revealed that the party had been paying school fees for his children. Whoever wins in June will want their own people on the board, so Harper might as well get out now and avoid whatever unpleasant tidying up is necessary to close the books on the Scheer interregnum.

The day after Harper fired a shot across Charest’s bow, MacKay announced that he was going to run. The next day, the Supreme Court of Canada rejected an appeal by Charest’s former fundraiser, which allowed legal documents to be published that cast ugly new light on an ongoing investigation that has already revealed a disturbing pattern of corrupt financing when Charest was running Quebec.

Charest has to know that if he runs for the leadership his campaign could be undermined by fresh revelations from that investigation, that he is polling well behind MacKay, that Harper is prepared to move against him and that most party members already regard him with deep suspicion.

If he runs and does badly, it could make him look foolish, which would not help him in his advisory business, so I expect he will conclude that discretion is the better part of valour. That means that the path is clear for MacKay, unless Ambrose can be persuaded to give up her directorships and pleasant life with her husband, J.P. Veitch, an investment banker and former rodeo rider, who is said to be unenthusiastic about playing the political spouse again.

If Brad Wall and Jason Kenney and their friends succeed in twisting J.P. and Rona’s arms, Ambrose would immediately be the frontrunner, with MacKay a distant second. If she stays out, the field is clear for MacKay. Add a random social conservative to the mix, and you have a four-way race that MacKay will likely win without much trouble.

That isn’t to say he is the best candidate. That’s not immediately clear, although the worst candidate is easy.

I find Poilievre alienating. He is smart and hard-working and has quickly built a strong campaign team, and has moved decisively to respond to the questions about same-sex marriage and abortion that Scheer could never handle.

But I will be surprised if he can connect with the membership, let alone Canadians who are suspicious of his party, not because of his policy positions, whatever they are, but because he comes across as mean and smug, a robotic and nasty spouter of talking points, an effective and skin-shredding opposition critic but not someone you would want to run the country.

O’Toole, on the other hand, has a lot to recommend him. A former Sea King tactical navigator, corporate lawyer and scandal-free minister in the Harper government, he is the kind of person we should want running the country: a hard-working family man, smart, seemingly ethical, with a nerdy interest in policy details and an open, friendly manner.

But he did not bring any kind of fight to Scheer in the last leadership race, so if he wants to beat MacKay he had better do something different this time, and he is never going to be as telegenic as, say, a bowl of milk.

MacKay, on the other hand, is great on TV, and his wife, Nazanin Afshin-Jam, a human rights activist and former Miss World Canada, is as comfortable in front of the cameras as he is.

True, MacKay is not a deep thinker, but neither is Trudeau. Both men are the scions of politicians, born to the business, which means they have good instincts, deep connections to the party and an equally deep sense of entitlement.

That may be why both have sometimes shown poor judgment at the intersection of their private and political lives, where politicians often get in trouble: Trudeau by staying at the private island of a billionaire, MacKay by using a military chopper to pick him up at a fishing camp.

Like Trudeau, MacKay makes gaffes from time to time, but if gaffes were fatal, Trudeau wouldn’t be prime minister.

Unlike Scheer, who was not really in the same league as the prime minister, MacKay likely has the moves necessary, the fighting spirit, to take on Trudeau. But Ambrose would be better, and the Tories all know it, and they have got to be twisting her arm awfully hard.

CORRECTION, Jan, 18, 2020: An earlier version of this story incorrectly stated that Erin O’Toole was a Sea King pilot. He was  a tactical navigator.