Who’s down with Maxime Bernier’s PPC? No crazies.

Andrew MacDougall: Bernier is clearly casting about for votes on the right fringe of politics, and pledge or not, in that direction embarrassment lies 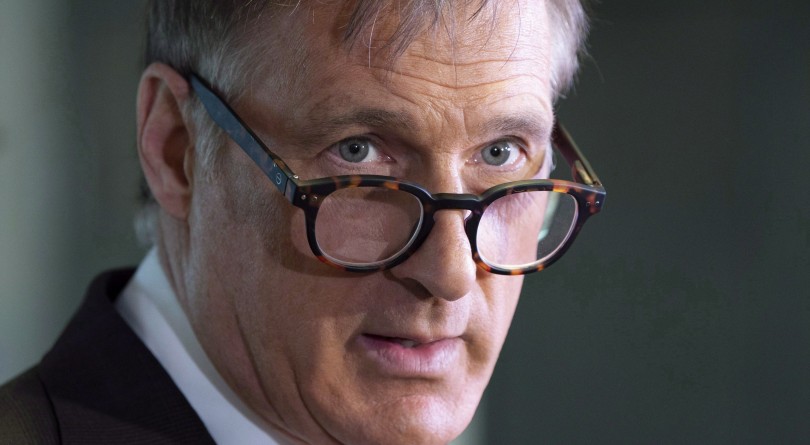 Maxime Bernier speaks with the media after filing papers for the Peoples Party of Canada at the Elections Canada office in Gatineau, Que., Wednesday, Oct. 10, 2018. (THE CANADIAN PRESS/Adrian Wyld)

That’s right. Mad Max’s new People’s Party of Canada (PPC) is dedicated to weeding out the weird because it doesn’t want any embarrassment as it attempts to forge a path to fourth place in next year’s federal election.

That was the thinking, anyway, behind the PPC’s recent missive to prospective riding association members—dubbed the “embarrassment pledge” —which it is asking members to sign. “I pledge that I have done or said nothing in the past,” it reads, “and will do or say nothing in the future, that would embarrass the party.” Who’s down with PPC? No crazies!

Despite their vital role in local democracy, most Canadians wouldn’t recognize a riding association member if they rode next to one on the bus. Or sat next to one in church. Or took a ballot from them in a polling station. They’re not public figures or policy makers. And now Bernier wants to keep it that way.

READ MORE: What is Maxime Bernier and his People’s Party selling?

The trouble for Bernier is that he’s fishing from a pond that’s chock full of loon.

In painting Andrew Scheer’s Conservatives as Justin Trudeau Liberal-lite and  indulging in some heavy petting with The Rebel Media, Bernier is clearly casting about for votes on the right fringe of Canadian politics. You know, the kind of folks who look to Donald Trump for etiquette lessons. And that way embarrassment lies—as defined by media tastemakers, anyway. Hence the pledge.

In my experience, most riding association members are alright. They’re good, decent folk. But they do care about politics a lot. Like, a lot. To an unnatural degree. You have to be to do the grunt work of politics. And that goes treble for the people willing to stand up a new party in the face of tight media scrutiny. There are going to be some weirdos flocking to the PPC, and some prophylaxis is probably in order.

Fine. But is that “weird”, as in inviting some racy décolletage to your Cabinet swearing-in? Or ‘weird’ like having that décolletage belong to a former biker moll?

Or maybe that’s ‘weird’ as in leaving your secret foreign affairs documents in said biker moll’s house? (Bernier was sacked for that one.)

All of this to say, the anti-weird approach clearly isn’t starting at the top. Which will ultimately make it a bit hard to enforce. Especially if Bernier gets caught out by his potential voter pool chanting weird things (psst…ask Chris Alexander) at the events he’s planning on attending.

And even then, the PPC’s embarrassment pledge is no guarantee. I can guarantee you that no signed piece of paper will stop a journalist from reporting a story about a future crazy thought from a PPC riding association member should one happen. At the end of the day, “but they promised us they weren’t wackos” isn’t much of a defense.

So, good luck with your anti-crazy colander, People’s Party of Canada. But you’d probably be better off with a muzzle.

CORRECTION, Nov. 6, 2018: An earlier version of this story misidentified the PPC spokesperson.