Why COVID-19 gets more government attention than the climate catastrophe

David Zarnett: Coronavirus poses a threat that comes from other humans, which makes it more psychologically legible than climate change 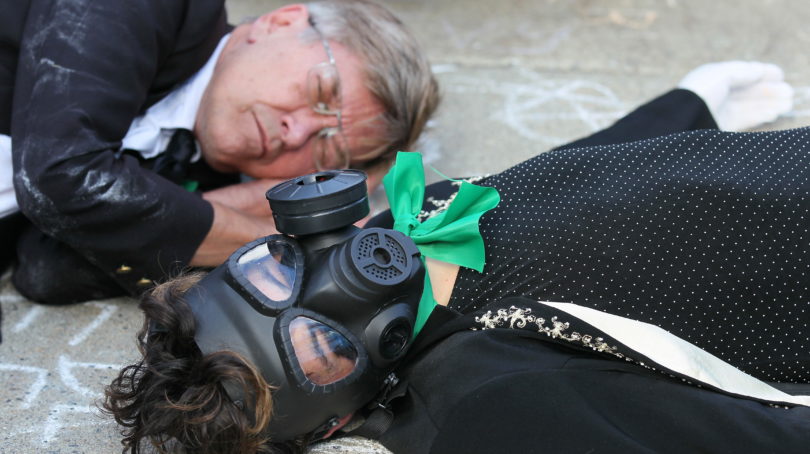 TRAction Art Group performing an intervention on the steps of the Calgary Municipal Building during the Climate Parade on Friday, Sept. 20, 2019. (Dave Chidley/CP)

David Zarnett is a lecturer and undergraduate advisor in the department of political science at the University of Toronto.

Italy’s announcement of a full, nationwide lockdown is just the latest in a series of significant measures governments around the world have taken to stop the spread of the novel coronavirus, COVID-19.  Russia has closed its 4,000-kilometre long border with China, Saudi Arabia has banned all Muslim pilgrims from visiting its holy sites, Japan has closed all schools, and Israel has imposed a 14-day quarantine on all arrivals. A number of other countries, including Australia, India, Indonesia, and New Zealand, have imposed travel bans on those travelling from or through China.

These measures reflect the seriousness of the threat posed by infectious disease in a hyper-connected world, but they are also somewhat puzzling. States do not respond to all significant threats with the same vigour. While some threats garner significant attention and resources, others do not.  For instance, numerous governments have imposed air travel restrictions to limit the spread of the coronavirus, but they have not imposed such restrictions to combat the threats posed by climate change, despite evidence that aviation is a significant contributor to global carbon emissions. To date, the international response to COVID-19 has been far more robust than the response given to climate change, which has been described as grossly insufficient.

The reason for this is not that the coronavirus is more threatening than climate change.  There is no disputing that COVID-19 is deeply concerning. It is estimated to be 10- to 20-times more deadly than the common flu and, as of writing, has led to approximately 4,550 deaths. According to one worst-case scenario, 70 per cent of us may get infected, of which two per cent (or 109 million), will die.

The devastation from climate change is likely to be far greater and is already being seen. Air pollutants associated with climate change are said to contribute to seven million deaths annually.  Like COVID-19, these air pollutants increase the risk of pneumonia and other respiratory infections, killing an estimated 570,000 children under five each year. Rising temperatures have lead to approximately 250,000 deaths per year, as well as a whole host of other life-threatening conditions, from increased blood pressure to poor mental health.

Climate change is also contributing to the collapse of entire ecosystems and increases in the number of extreme weather events, which damage not only public infrastructure and the economy, but all living things. This was seen most vividly in Australia’s fires, which killed an estimated one billion animals. According to one group of researchers, climate change is a “planetary emergency” that poses “an existential threat to civilization.”

If the severity of the threat doesn’t explain the different international responses to the coronavirus and climate change, what does?

There are at least two key factors that matter.

The first is time horizons. Evolutionary psychologists have shown that we tend to respond more significantly to immediate threats than we do long-term ones. In the struggle to survive, genes that contributed to emotions and behaviours that were more sensitive to imminent danger were more useful and thus more likely to be passed on to subsequent generations. Political scientists have shown that governments tend to make concrete plans to address short-term concerns but make only abstract plans to address long-term ones.

For good reason, the coronavirus is largely understood as an imminent threat that requires a prompt government response. For no good reason, however, climate change is widely viewed as an issue that poses significant challenges years or decades from now, despite evidence that the threat is indeed immediate. For instance, based on the assumption that we still have time, the Liberal government has declared a net-zero carbon emission target for 2050.

In addition to immediacy, COVID-19 poses a threat that comes from other humans, which makes it more psychologically legible than climate change. This is because the main threat our ancestors faced came from other humans, especially members of other groups. Often, this threat came in the form of physical violence, but it also occasionally came from deadly parasites and infectious diseases.  To address this threat, humans developed psychological mechanisms that produce feelings of fear, disgust and even hate to help them avoid those thought to be infected. In fact, recent research suggests that Americans who live in regions with higher rates of infectious disease are more likely to hold racist or prejudicial views of others. Today, this can be seen in the hostile sentiment expressed towards individuals of Chinese descent, even if they have no symptoms or have never had any contact with others diagnosed with COVID-19.

Unlike infectious disease, the threat posed by climate change does not resonate as deeply in our minds. We tend to be less sensitive to threats that come from floods, heat waves and draughts than we are those that come from identifiable human beings. As Harvard psychologist Daniel Gilbert explains, “the brain is tuned in to the signal of other human action. And that’s why when other people do things to us, we’re very, very quick to respond…The problem is climate change doesn’t have a human face.”

Despite our strong psychological impulses to focus more attention on immediate threats from other humans, there is reason to believe that the same kind of robust response to the recent coronavirus can also be taken to address climate change.  Evolutionary processes have provided us with brains capable of self-reflection, which can help us recognize and overcome our tendencies that may have served our ancestors well, but are less useful today. They also gave us the capacity to “imagine beyond the present,” allowing us to envision and understand future catastrophes, which can help us take action to prevent them.

The coronavirus indicates that states can take the measures needed to respond to significant threats. A similar approach is needed for environmental threats, before it is too late.