Why Donald Trump will fail to divide Canada and the U.S.

Editorial: Our two countries are attached at the hip. Just look at NORAD, an integral part of U.S. defences where a Canadian is second-in-command 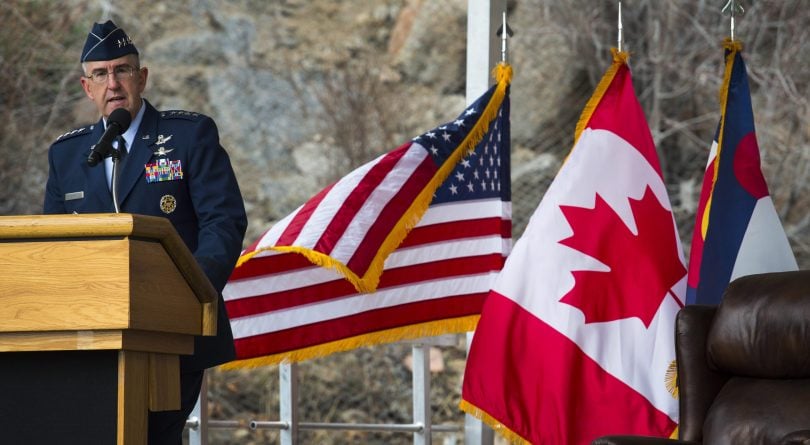 From bullying our Prime Minister, to dredging up 200-year-old war stories, to threatening massive tariffs on Canadian exports and to tear up NAFTA, U.S. President Donald Trump has been doing his damnedest to drive a wedge between his country and ours.

It won’t work. Canada and the U.S. share a friendship that, for reasons of geography, shared interests and common values, is deeper, more committed—and, admittedly, more complicated—than any other international connection in the world. This close relationship extends from matters of vital importance, such as defence, security and the economy, to broader social and cultural issues as well. It’ll take more than Trump’s Mean Girls act to break us apart.

Earlier this year, for example, the North American Aerospace Defense Command (NORAD) celebrated its 60th anniversary. This remarkable institution sees Canada and the U.S. jointly overseeing the air and maritime defences of North America. That such a crucial interconnection has endured, without controversy, for six decades is an unspoken testament to the forces that bind our two countries in ways that politics cannot undo.

“NORAD is the most deeply ingrained part of the institutional relationship between Canada and the U.S.,” says Christian Leuprecht, a political science professor at the Royal Military College in Kingston, Ont., and co-editor of a recent book on NORAD, North American Strategic Defense in the 21st Century. As evidence of how common defence interests tie us together in special ways, Leuprecht points out that a Canadian is deputy commander of NORAD. “Nowhere else in the world is the U.S. prepared to submit to the command of an officer from another country in defence of its own interests.” And this arrangement works well because it has been completely depoliticized. NORAD used to require periodic renewals by government, but since 2006 it has been renewed “in perpetuity.” It’s now part of the continental furniture.

NORAD may be the most obvious example of Canada-U.S. partnership at a federal level, but there are many other examples, such as the International Joint Commission on shared waters and the Commission for Environmental Co-operation. These ties run even deeper at the state and provincial level, including such things as joint annual meetings between New England governors and Atlantic Canada’s premiers, and the carbon-trading program between Quebec and California (and, until recently, Ontario). The Pacific NorthWest Economic Region (PNWER) similarly represents the shared economic interests of states and provinces on the West Coast. When Trump announced his recent plan to slap tariffs on Canadian goods, PNWER declared this “a bad idea” between “the world’s closest allies and largest trading partners.” Having U.S. domestic voices speak out in Canada’s favour in this way is a clear benefit in fighting Trump’s protectionist urges.

RELATED: In the U.S.-Canada trade war, we are not blameless

Finally, we shouldn’t overlook the many social and cultural bonds Canada and the U.S. share. The recent awarding of the 2026 World Cup jointly to Canada, the U.S. and Mexico hints at the strength of continental connective tissues—NAFTA or no NAFTA. The same goes for the fact that Canadians sat glued to their television sets last month watching two U.S. teams battle for the Stanley Cup—as American viewers watched Canadian players perform on their behalf. Even Canada’s status as the premier source of comedians for Hollywood—Jim Carrey, Mike Myers, Dan Aykroyd, Samantha Bee, Seth Rogen, etc.—is further evidence of the many ways in which the North American military-industrial-entertainment complex has turned us into one seamless set of eyeballs. And who’s going to split that up?

“Political ideology may shift,” says Leuprecht, “but Canada and the U.S. will always have a shared set of values such as freedom, democracy, prosperity and capitalism. We are not just two sovereign countries sitting side by side, we also have a common continental identity.”

What a continent has joined together, let no man put asunder. Not even a man named Trump.