Nick Taylor-Vaisey: Toronto sports fandom is typically a lifelong exercise in futility with the rare bright spot. Kawhi Leonard reminded us how good the good times can be. 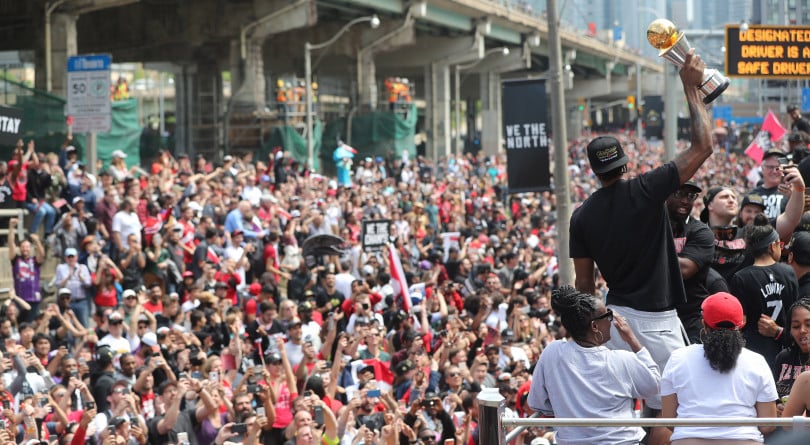 Kawhi Leonard holds up his MVP Trophy to fans lining the route as the Toronto Raptors hold their victory parade after beating the Golden State Warriors in the NBA Finals in Toronto. June 17, 2019. (Steve Russell/Toronto Star via Getty Images)

I was in Rochester, N.Y., the night after the Toronto Raptors won their first NBA championship, on the way across a parking lot to watch some local minor-league baseball. The epic street parties only a few hours past already felt a bit distant—until a total stranger, that is, recognized our Blue Jays paraphernalia, burst out of his car almost while it was still in motion, and yelled something about someone on Twitter—of course it was someone on Twitter, where nothing is left unsaid—saying Toronto teams win it all every 26 years. It was almost manic.

His math was questionable. The Maple Leafs won the Stanley Cup in 1967, and it’s true that 26 years later in 1993, the Jays won the World Series in spectacular fashion—and then 26 years after that, the Raptors finally won their first title. But the Jays also won in 1992. (And what about the occasionally glorious Argonauts, who last won the Grey Cup in 2017? And their soccer-playing Toronto FC cousins, who won the MLS Cup the same year? And even the minor-league Marlies, who won hockey’s Calder Cup in 2018?)

The point is: Toronto sports fans tie themselves in knots over not winning, and treasure the big anniversaries (see the requisite Jays video tributes in 2002, 2003, 2012, 2013, 2017, 2018 and counting). Nostalgia has come to drive fandom. Old-timers recall Bobby Baun’s broken-ankle goal in the 1964 Stanley Cup final. Millennials were only young kids when Joe Carter’s blast sealed back-to-back World Series wins. And those young kids were only a couple of years older when the Toronto Raptors first took the court in the same cavernous SkyDome.

After so many years of cheering on the Raptors and Leafs and Blue Jays for the sake of it, suddenly Toronto fans like me found ourselves in the middle of a sports renaissance—or so we all hoped. The Jays made the playoffs in 2015, and again in 2016. The Leafs were at least competitive again, even ascendent. The Raptors, after years of mediocrity, were winning division titles. Each team was labelled a consensus contender by talking heads. But they all lost. The Jays fizzled, the Leafs collapsed, and the Raptors—maybe the most talented of the bunch—kept hitting a wall named LeBron James.

Then Kawhi Leonard came to town last July. Leonard was swapped for DeMar DeRozan, exactly the kind of fan favourite who thrived in Toronto. DeRozan was drafted by the Raptors, easy to cheer for, talented and always improving, and he exuded a trait so familiar in this town: potential. Raptors mastermind Masai Ujiri made the trade, DeRozan was off to San Antonio, and the robotic enigma nicknamed The Klaw was a Raptor.

RELATED: With the Raptors’ win, Toronto leaves the agony behind

Just shy of a year later, the Raps were the best team in the league. They’d toppled a dynasty. Sports fans finally filled Yonge Street from top to bottom, a dream of so many believers finally come true. No one batted an eye when revelers near Yonge-Dundas Squate took over a bus meant to block traffic, somehow lugging a keg up there and pouring beer all over everything.

The catharsis of that night’s party explains why, when word leaked that Leonard was signing a four-year deal with his hometown Los Angeles Clippers—a substantial pay cut from the Raptors’ offer—#ThanksKawhi trended on Twitter. It’s why when the Clippers play in Toronto, he’ll receive the same extended ovation as his trade-mate DeRozan did on his own return last season. Leonard is many things that DeRozan is not. He made millions of long-suffering fans, whose aging jerseys betrayed the length of all their droughts, feel like champions.

When millennials are the old-timers, and we’re recalling Leonard’s legendary “Shot” to kids as desperate as we were, no one will care that he moved home to LA. In this town, we know true sports glory is heart-achingly rare. Leonard was the guy who took one of our teams to the next level and reminded us that all those years of hope weren’t in vain. For that: Thanks, Kawhi.