Why Trans Mountain is a bad deal for Canadian taxpayers

OPINION: Understanding incentives are the core of any smart economic policy. The Trudeau government seems to have a shaky grasp of that fact.

By Jason Clemens, Elmira Aliakbari and Ashley Stedman May 31, 2018 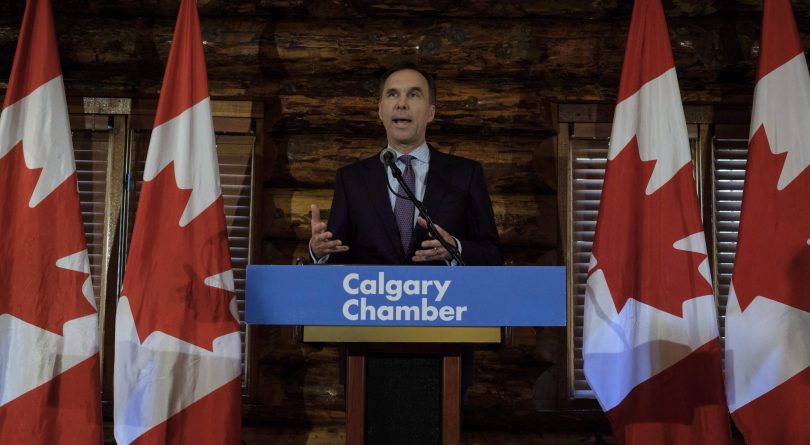 Minister of Finance Bill Morneau speaks to the media in Calgary, Alta., Wednesday, May 30, 2018.THE CANADIAN PRESS/Jeff McIntosh

The last week has seen numerous assessments—mostly critical—of the federal government’s decision to purchase the Trans Mountain pipeline. And yet, a key aspect of the decision—this government’s dismissive view of the role and importance of incentives—has been almost entirely ignored. Put simply, the federal government doesn’t believe incentives matter all that much in the economic decision-making of individuals, families, entrepreneurs and businesses.

Finance Minister Bill Morneau announced the government’s decision in a press briefing on May 29, two days before Kinder Morgan’s self-imposed May 31 deadline. In that briefing, the minister revealed the government’s confidence in the public sector to undertake and complete activities as well, if not better, than the private sector. For example, while avoiding the specific question of how much the government expects to pay for the construction and ongoing operation of the pipeline, Morneau repeatedly assured Canadians that the value of the pipeline would be secured.

This assertion belies Canada’s own experience, and international research. For example, Oxford University scholar Bent Flyvbjerg co-authored a study examining major government projects in 20 countries and found that nine out of 10 public infrastructure projects incurred cost overruns. Simply put, Flyvbjerg concluded that large projects done in the public sector are inefficient in minimizing costs. His findings support a large review completed in the early 2000s on the benefits of transferring publicly-owned assets to the private sector.

That’s not to say the public sector is not staffed by well-intentioned skilled bureaucrats. Indeed, Canada can be quite proud of having one of the best, most professional bureaucracies in the industrialized world.

The problem, however—and what the federal government seems oblivious to—is that government bureaucrats face markedly different incentives than people in the private sector. If Kinder Morgan (or any private company) goes over budget on infrastructure projects, it’s their owners and employees who pay the price through lower rates of return, lower share prices and/or reduced compensation. In other words, the costs of missteps are borne directly by those responsible, which imposes a real discipline on financial and economic decisions.

This discipline is wholly absent in the public sector. If the construction of the pipeline is over budget, or if it sells in the future at a price below market, no politician or bureaucrat will lose their own money. It’s a basic axiom in economics that people are far more careful with their own money than with other people’s money.

MORE: Who will build the Trans Mountain pipeline—and at what cost?

Unfortunately, this federal government’s misunderstanding of the role and importance of incentives is not limited to differences between the government sector and private businesses. Since coming to office, it has introduced a number of policies it believed would not adversely affect the economy because the incentive effects were weak or non-existent.

For instance, the federal income tax increase, which affects entrepreneurs, professionals and business-owners, combined with similar policies by many provinces, means that the top combined income tax rate now exceeds 50 per cent in seven provinces with the remaining provinces just below 50 per cent. And because Canada’s capital gains tax is linked to personal income taxes, these rate changes have also increased our capital gains taxes. In other words, Ottawa doesn’t believe that a tax rate near or above 50 per cent changes the willingness of entrepreneurs, professionals or businesspeople to invest and start businesses.

Moreover, these tax changes are on top of other tax increases, new regulations and a distinctly anti-business rhetoric from Ottawa and several provincial capitals. These policies—and the incentive changes they produce—have had adverse consequences for the economy. There’s a general consensus, including in the federal department of finance, that economic growth will slow starting this year and continuing into the future. In addition, rates of entrepreneurship are declining, and investment, particularly by foreigners, is collapsing. This is not the basis for long-term prosperity.

The foundation for a better economy and higher living standards relies on improving incentives for entrepreneurship, investment and work effort. That would require a wholesale reversal of many, if not most, of the economic policies enacted by this federal government and a recognition that incentives do indeed matter.

Jason Clemens, Elmira Aliakbari and Ashley Stedman are analysts with the Fraser Institute.