Will we really sacrifice the Canadian economy at the altar of the dairy industry?

Scott Gilmore: What was last week an issue of trade is now a question of patriotism in the face of Trump. But it won't change the economic math. 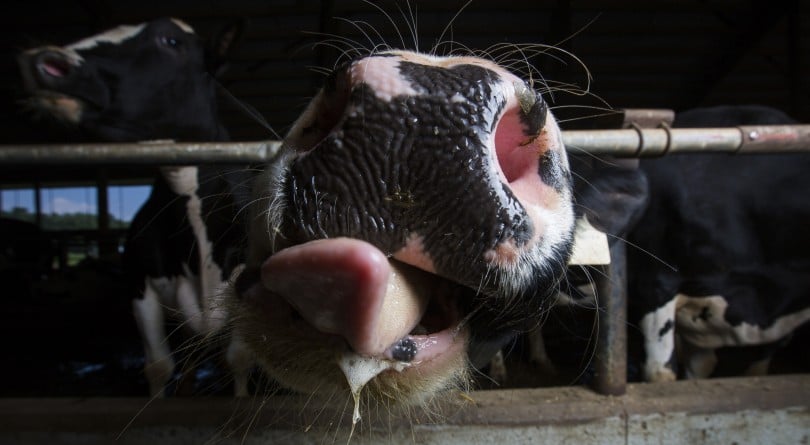 Cows stand in a pen at the Loewith dairy farm in Lynden, Ont., on Tuesday, July 16, 2013. (Brent Lewin/Bloomberg via Getty Images)

It’s been a confusing week. Yesterday Karl Rove was defending Canadian tariffs on Fox News with a hand written chart while Dennis Rodman was crying on CNN about Donald Trump. It’s understandable if we might be getting some of the plot lines confused. Let’s try and untangle just the part that involves the possible collapse of the Canadian economy.

To begin, we need to recognize that there are three separate plot lines right now. First, there is the story about Trump and his tweets. These have been even more aggressive and unpredictable than usual. One called Prime Minister Justin Trudeau “dishonest and weak”. These attacks are nominally related to Canadian trade, but just as easily they could have been about Trudeau’s socks and have been equally angry. That’s just what Trump does – his tweets are merely the digitized embodiment of his malformed id.

Second, we have the trade war. This is far more serious. Trump has imposed tariffs on steel and aluminum and is now also threatening to add autos. His reasons for this change. Before he linked it to the NAFTA negotiations, then national security, and now he tweeted it is because of Canada’s supply management system and the protection of our dairy industry. It is none of those things. Trump just wants tariffs. He promised them during his campaign. His base thinks it makes America strong. And Trump believes that you can win trade wars. In fact, they’re good.

The third storyline this week was about NAFTA, and the possibility that the renegotiations may stall or even fail. Why? While tweets and tariff wars complicate matters, the reality is negotiating a massive three nation trade pact is complicated and takes time.

Surprisingly the Canadian dairy industry played a cameo role in all three of these plot lines this week. But it is properly placed in the NAFTA story. Although Trump is now linking dairy to the tariff war, they have been a part of the NAFTA re-negotiations since the beginning, they were part of the first NAFTA talks, and of the FTA before that. Every sector of the economy is on the table and the Americans quite understandably see our supply management system as a relevant trade issue that should be weighed against all the other tariff lines.

The first time we negotiated NAFTA, we paid for protecting Canada’s dairy cartel by giving up tariffs on other industries. But this time, the issue is now in the spotlight. The president has made it clear he wants blood, and his negotiators will now prioritize changes to the supply management system above all other remaining issues. In other words, it is quite likely the success of the NAFTA talks now depends on diary. Which insidiously leads us to an overwhelming question: Is Canada prepared to sacrifice the entire Canadian economy to defend the dairy industry?

When asked that way, the answer is obvious. Risking over $600 billion in trade to protect one small industry would be insane. And that is without even taking into account, according to the Conference Board of Canada’s calculations, the supply management system already costs every consumer on average $276 per year in higher food prices.

But the question the public is asking is: Should we stand up to a bully? And the question our politicians are asking is: Will protecting dairy help my political career? What was last week mostly an issue of economics and trade is now a question of patriotism and politics. If we want to take our decision in that light, then so be it. But getting re-elected and the rosy glow of nationalism will not change the economic math.

Defending supply management could mean destroying the Canadian economy in return for holding on to an archaic abomination. If the system did not exist today, and a politician was to propose implementing it, they would be publicly mocked and quickly voted out of office. It is a hidden subsidy that protects a small number of businesses (which we euphemistically refer to as “farmers”), it operates in only a few small areas, and by the dairy industries own generous calculations only contributes 1 per cent to the national economy.

Because we are protecting these companies from having to compete—in a way enjoyed by virtually no other industry in Canada—we pay the subsidy every time we pay for our artificially expensive milk, a price that falls disproportionally more on lower income families.

In a sane world, our Prime Minister would let tempers simmer down. Then, he would instruct our NAFTA negotiators to table possible changes to supply management. Because Trump is now so focused on our dairy industry, the American negotiators will be willing to exchange more for our dairy concessions than they were even a week ago. The result being Trump gets to crow about his victory, and we get to walk away with a better NAFTA deal than we could have had before. (And Canadians no longer have to underwrite an oligopoly.)

But, the idea that we would “give in to Trump”, is already infuriating some Canadians. And others are worried rewarding Trump for his tirade will only encourage him to ask for more. To this I would point out that Trump is a belligerent bully today and he will be one tomorrow. Tanking the Canadian economy to protect dairy will not suddenly change him into a rational actor. He will always be demanding more. And we will always have to weigh the pros and cons of giving it to him.

Finally, there are some pragmatic types who say we can’t trust Trump. This is true. We can’t. But, we entered into the NAFTA negotiations knowing that. The fact the President of the United States is a liar and a swindler is a reality every country has to deal with. And as Andrew Coyne has written “Limiting the harm that Trump does to us is now perhaps [Trudeau’s] most important job.”

I agree. And if he is doing that job correctly, he must be asking, “Can we really sacrifice the Canadian economy at the altar of the dairy cartel?”