Would Donald Trump 'take responsibility?' No way, not on Oval Office Opposite Day

Tabatha Southey: It’s not exactly leadership in a time of global crisis, but Trump's various public statements of late demonstrate the president is keeping a social distance from reality 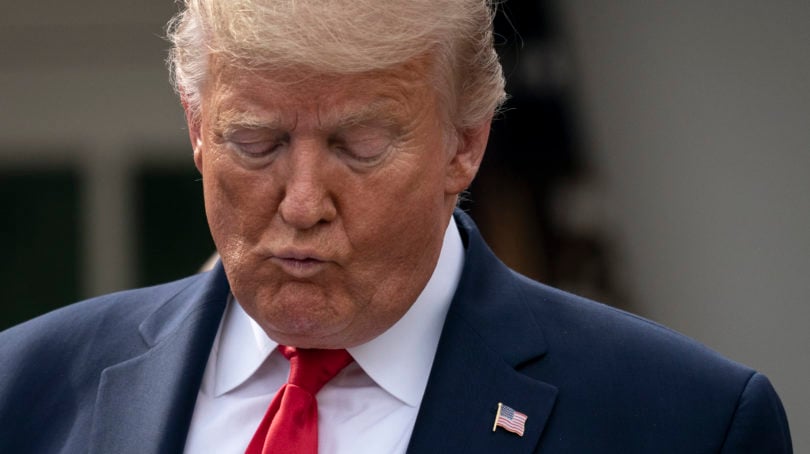 It’s just possible there’s an alternate universe where the primary function of a leader in a time of crisis is to cause panic, spread misinformation, lessen faith in authority and tank the stock market. If so, we need to get whatever inter-dimensional travel ban their current leader decided was a brilliant idea lifted and move Donald Trump there where his skills will be appreciated.

It’s difficult to imagine a more terribly conceived and badly executed address than the one Trump pulled out of his adviser for policy, Stephen Miller, and his jack of all portfolios far too serious to entrust to your entirely unqualified son-in-law, Jared Kushner, on Wednesday night.

Miller and Kushner both worked on the address that Trump delivered from the Oval Office. One never quite knows what Kushner’s contribution is to anything—beyond his trademark “my dad paid $2.5 million to Harvard” stare—but the speech was classic Miller.

“This is the most aggressive and comprehensive effort to confront a foreign virus in modern history,” Trump boasted. “Foreign virus” has Miller’s fingerprints all over it. At that line, Miller might as well have come up to the desk, wiped his hands on Trump’s hair, grabbed his sharpie and signed the teleprompter.

You may know Miller from his work in Not-Plausibly Deniable White Supremacy, in which he recommended the flat-out racist opus Camp of the Saints and shared a link to the white nationalist anti-immigration website VDARE, or maybe from the Muslim Ban franchise.

Framing the issue as a “foreign virus” isn’t even a dog whistle, it’s laying out big plies of red meat and then coming back and rearranging that meat to spell “Xenophobia is my hand sanitizer.” Trump’s plan for combating the virus stops just short of promising to build a wall and make the pathogen pay for it.

Trump has consistently downplayed, indeed trivialized, the threat of the virus, dismissing it as a “flu” and one that is “very much under control in the U.S.A.” at that. “When you have 15 people … the 15 within a couple of days is going to be down to close to zero,” he said in late February, while suggesting that the virus would likely be a boon to the U.S. economy because “instead of leaving our country, leaving our shores, [Americans] will stay here.”

It’s not exactly leadership, but Trump is keeping a social distance from reality.

Throughout this whole tragic coronavirus episode—and I fear the series is going to have a long run—Trump has made it clear that he is fairly unconcerned by the news of a rapidly spreading virus, and very concerned about how the stock market is receiving that news. Not much worried about people, the president has been anxious to calm the market, the state of which he ties to his own re-election chances. With every tweet Trump sings the market a lullaby, and with every word to the press, he tells it a tale.

Prime time Wednesday night, Trump did nothing to reassure Americans about their health-care system’s capacity to respond to the pandemic. His tone was more flat and cold than stern, although one senses the effect was meant to be Churchillian. He seemed to resent even admitting there was a problem, this being a departure from his own narrative.

RELATED: Will Canada close its border with the United States?

Trump did say that he’d “met with the leaders of the health insurance industry, who have agreed to waive all co-payments for coronavirus treatments, extend insurance coverage to these treatments, and to prevent surprise medical billing.” He then had to walk even that way back in a post-address tweet after a spokesperson for the major insurance lobby AHIP said the waiver was “for testing. Not for treatment.”

Mostly what Trump did for listeners was announce a ban on all travel from Europe to the United States for the next 30 days. This is a move that all but says, “I have no idea how to contain this thing or help people who may be infected with it or even determine in any efficient way who these people might be, so I’m doing this.”

The president of the United States is a man who expresses his emotions entirely through travel bans.

Just about the only thing the address made clear is that Trump had a couple of bad ideas to impart, and he can’t even be counted on to do that. In announcing his nonsensical travel ban, Trump did not mention that the ban on travel from Europe (excluding the U.K.) specifically meant the Schengen Area and not the entire continent, or that the ban would not apply to U.S. citizens, permanent residents or much of their immediate family. A small (read: very large) piece of information that could have saved Americans rushing to get home from Europe a great deal of worry and money.

Trump was careful to say that the ban applied not just to people, but to goods. Which was a problem since, as seemingly half the administration rushed to make clear in the immediate aftermath of the speech, the U.S. was not actually planning to completely shut off trade with Europe for a full 30 days.

Unfortunately, being told it was Oval Office Opposite Day did absolutely nothing to buoy up the stock market, where on the heels of Trump’s address, the Dow had its worst day since 1987. Not to be outdone, the TSX had its worst one-day drop since 1940. The general feeling seems to be that having a president who would accidentally say such stupid things may be even worse than having a president who would intentionally say such stupid things.

The tickers were pretty much reading: NO. ▼ONE▼ IS $GOING. +TO RETIRE -EVER%.

READ MORE: The unbearable lightness of Donald Trump in a coronavirus crisis

Trump did tweet a correction, demanding people “please remember” that thing he never in fact said which is that “trade will in no way be affected by the 30-day restriction on travel from Europe. The restriction stops people not goods.”

We are being asked to believe Trump misspoke on Wednesday night. Who can forget that time Churchill said, “We shall surrender next Tuesday”?

What history will note is that it wasn’t until this market panic that Trump finally—petulantly, somewhat angrily even, as if someone were holding a stock market collapse to his head, declared, “National emergency—two very big words.”

On Friday afternoon, with the bad reviews pouring in, Trump held a bizarre post-address press conference mostly to congratulate himself on the success of his Oval Office address and to introduce what he clearly takes to be a confidence-inspiring lineup of America’s Top CEOs.

Trump brought his CEOs out one by one—he had a Target, Wallgreens and Walmart—carefully giving their names and attributes. He was like a very tired (the president sounded exhausted and was at times barely intelligible) kid showing off his Pokémon cards.

Vice-President Mike Pence recited what can only be described as an Ode to Donald Trump, spoken directly to Donald Trump, addressing him as “you” and “Mr. President.” One senses Pence carries one of these odes around in his back pocket, ready to whip it out when need be.

While Trump had clearly feared that stating the bleeding (well, experiencing severe respiratory issues) obviously would spook investors, word is he was also waiting to hear from Kushner, who was doing a spot of virus research and was going to present his findings to the president before making the emergency call.

RELATED: How labour policy in both Canada and the U.S. affects the spread of coronavirus

That’s right, the decision to make an emergency declaration that would bring the Federal Emergency Management Agency into the mix and provide more funding and resources to those states grappling with the virus rested for a time on another Jared Kushner book report.

Now I’m seeing his face again. I swear at some point in his life Jared was doing an impression of Mia Farrow in Rosemary’s Baby—just when she’s given the tannis root necklace—and the wind changed and now that’s all we’re ever going to get from the man. Trump was waiting to get his son-in-law Rosemary’s take on COVID-19, and that’s a tricky one. Much suggests that Kushner has a weakness for powerful, influential killers. He’s likely texting with the virus right now, but at any rate an American national emergency this now is.

It was a long press conference in a long week, and Trump never stopped being Trump for a second. When PBS’s Yamiche Alcindor asked Trump about his administration’s decision to fire the U.S. pandemic response team in 2018 to cut costs, Trump said angrily that he knew nothing about that, calling it a “nasty question.” The takeaway quote from the whole event was Trump’s “I don’t take responsibility at all.” Trump attempted his “I don’t know Insert Politically Damaging Person Here” technique to explain why his recent close proximity to someone known to be infected with COVID-19 shouldn’t concern anyone.

“We all know where it came from,” Trump said, promising more shifting travel bans, so more chaos, and as I type the various corrections and clarifications that a Trump speech inevitably brings are popping up everywhere. Sometimes a do-over is just that.