'You have warmed our hearts'

Letters to the editor, March 27, 2020: Readers weigh in on our cover that paid tribute to Flight 752's victims, the fight for Western independence and a mail-hoarding postal worker in Japan 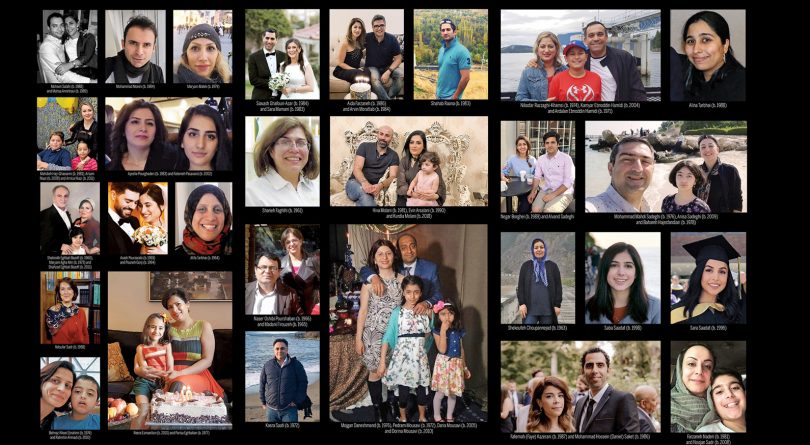 Last month, our print cover paid tribute to the victims of the Flight 752 disaster in Iran, in which the military shot down a Ukraine International Airlines jetliner carrying 57 Canadian citizens and 29 permanent residents.

Your March issue is a beautiful gesture that means so much to all of us who are of Iranian heritage and living in Canada, or elsewhere around the world. As my mother in California said: you have warmed our hearts.
—Ladan Rafii, Ottawa

In March, Contributing Editor Adnan R. Khan traced the history of the War on Terror from 9/11 to the present day, and could only conclude that the terrorists have already won.

I am just a little over halfway into the March issue and I have to stop and say, “What a terrifying time to be living in!” From pro-democracy protesters afraid to show their faces in Canada to beautiful, intelligent, educated, kind people senselessly shot out of the sky, to smart and hard-working Canadians who think they would be better off on their own to—most frighteningly—the possibility that the U.S. has been playing right into al-Qaeda’s hand all along, my heart is pounding at the suffering of the world and the ignorance of so many who could make a positive difference. How grateful I am for Adnan R. Khan, and the many others like him, who are willing to look deeper than the past week’s headlines and really assess the way the many steps of history have led us to this place. If fear and chaos are what al-Qaeda wants, the best way to resist is through their opposites—love and hope. There is no one person, no matter how much political or economic power they have, who can solve any of the many issues facing our world today. But the more people who can listen to the “other” and, better yet, consider no one an “other,” the closer we will all be to peace.
—Bethany Matejka, Swan River, Man.

In February, Assistant Editor Nadine Yousif interviewed Albertans who were so furious with the state of Confederation that they bought into the Wexit movement to separate from Canada.

Al Neitsch of Airdrie states, “Al­berta has the ability to achieve an economy like that of Norway.” Precisely! So, why hasn’t Alberta emulated what the far-sighted Norwegian government has done by embracing a more activist royalty regime, thereby securing a more equitable rate of return from their North Sea oil play? Since the early ’90s, Norway has amassed a sovereign wealth fund of approximately $1.3 trillion. Alberta, by contrast, has accumulated a relatively meagre Heritage Fund of around $18 billion. A yawning disparity. The difference being that successive feckless, scandal-ridden Conservative administrations, especially after the departure of Peter Lougheed, became increasingly captive to the Canadian Association of Petroleum Producers and their lobbyists. Consequently, they never came close to recovering a sufficient economic rent from their vast oil reserves. We in Saskatchewan experienced a similar fate when the grossly incompetent Conservative Party under then-premier Grant Devine privatized that part of the potash industry owned by provincial citizens via the Potash Corp. of Saskatchewan. In return for $630 million, we have, over the past 30-plus years, lost tens of billions in royalties. Sound familiar, Alberta? Sadly, separating isn’t likely to instantly make our respective Conservative/PC/Wild Rose/UCP/Saskatchewan Party politicians any more competent. This is not to minimize the very real angst that pervades the resource community in both provinces. But really, have we not, to some extent, been the authors of our own misfortune?
—Gavin Pugh, Regina

Here’s to the mail

In February, Contributing Editor Shannon Gormley wrote about a postal worker in Japan who had hoarded 24,000 pieces of mail in his home, because delivering it was “too much bother.”

Hey! There’s another side to this mail business. At 95 one of my joys is going to the mailbox to see what is there. It doesn’t often happen, but I am disappointed if there is an empty box. Even bills mean someone is thinking of me! One of my pleasures is writing letters—the old fashioned way, in long hand. I admit my writing has got a little shaky with time and I revert to my trusty old electric typewriter, but my correspondents seem to enjoy it, and almost always reply. What a pleasure to find a letter in the box—maybe from the U.K. Maybe from Morocco. Sometimes from France and quite often from the U.S., and I could go on. And if those personal letters are mixed up with junk mail—who cares? Yep! It keeps coming and coming, and Glory be, I say, “Praise the Lord for the mailman/woman.” One other thing. It is good therapy. I advise any oldie like me—write to somebody today, even if it’s just a greeting card. It takes away any loneliness. And you think. And it gives you something interesting to do. And it has an uplifting payback. “The more you get out, the more keeps coming in,” as Shannon Gormley rightly puts it. What did I get in the mail today? Two magazines (including Maclean’s). Two birthday cards. A free Swiss Chalet dinner from our local real estate company. A round robin pack of letters from the U.S. and Canada from friends and a pack of brochures. All good stuff. In other words, don’t knock the mailman.
—Stan Smurthwaite, Elmira, Ont.

In February, Contributing Editor Andray Domise wrote about how the myth that Canada champions peacekeeping shields the country from criticism as it enables bad actors who subvert democracy in other nations.

I’m writing to congratulate Andray Domise and the editors of Maclean’s for your courageous publication of a sorely needed antidote to the narrative on the allegedly anti-democratic nature of the Venezuelan government, held not only by the Canadian media and government, but also, sadly, by too many allegedly progressive academics. As an Argentine physician, social scientist and educator in public policy, I am appalled by the propagandistic quality of Canadian reporting on Latin American issues, which essentially toes the line of U.S. regime-change operations and which, not coincidentally, aligns well with Canada’s own interests. The misleading, when not outright false, nature of this reporting aside, it clearly disregards its role in legitimizing the well-documented, catastrophic implications of these operations for the health and well-being of millions south of the Rio Grande. To mention just one such implication, the illegal and immoral U.S. sanctions on Venezuela, enthusiastically endorsed by the Canadian government, have caused an estimated, completely avoidable, 40,000 deaths, for no other reason than installing a U.S.-style “democracy.” Of note, this “democracy” is opposed by the vast majority of Venezuelans, who have benefited from the social, educational, health and economic policies implemented by the governments of Hugo Chavez and Nicolas Maduro, even as these policies have provoked the wrath of Washington and Ottawa. Canadians are never told why Saudi Arabia, a serial human rights violator if ever there was one, does not make it onto this list. It is about time that Canadian foreign policy started taking seriously international law, the UN Charter, the right of self-determination of sovereign states and plain human decency, not only rhetorically but by standing on the right side of history.
—Claudia Chaufan, Toronto

Let me get this straight: your cover story is about the “corrosive” blame game between generations. On this topic, your editorial calls for “an unprecedented degree of cooperation.” Then, your article on Pete Buttigieg calls his supporter Kevin Costner a “has-been boomer celebrity.” A cursory search of Google reveals Costner has gotten more selective about film roles to spend as much time as possible with his youngest children (he has seven). With more than 50 movies and two Oscars over a 45-year career, he’s likely got nothing left to prove. In my opinion (I happen to belong to Gen X), dismissing this 65-year-old, highly accomplished person with a remark like this is the kind of inter-generational rhetoric that is superficial, snide and, worst of all, wholly unhelpful. As we move forward together, we should aim to make generous assumptions and be respectful. You can do better.
—Anya Macleod, Cumberland, B.C.

In February, Alanna Mitchell wrote about how diaries show the disastrous extent of the ‘Anne of Green Gables’ author’s addiction to prescription drugs, as well as parallels to our modern-day opioid crisis.

Alanna Mitchell interviewed me as part of her investigation into L.M. Montgomery’s drug-taking. The number of doctor-prescribed medications that Montgomery and her husband, Ewan Macdonald, were taking is staggering and may have proved fatal in Montgomery’s case. The overall drug story is valuable, I think, but I am disappointed that there wasn’t enough space for the writer to take up the very different reasons behind the prescription drug-taking of the couple. Macdonald had mental illness episodes throughout his life, and while the drugs he took no doubt exacerbated his problems, they were also separate from them. Montgomery’s own need for these prescription drugs was largely due to the difficulties of coping with her husband’s illnesses and the growing complications of hiding them from an unsympathetic public. She was the real bread-winner in the family and the pressures she suffered were enormous. In any case, as Mitchell suggests, the parallels between then and now, in our opioid crisis, are worth compassionate exploration. A shortage of doctors now may spell disaster, also accidentally, for the many who trustingly take the prescriptions they are offered in good faith, but who do not have access to a doctor or other health professional who will follow their case with a sharp and kindly eye. Perhaps what is most amazing about Montgomery’s situation is that she continued, despite the harmful drugs she was prescribed and mixing, to try to counteract hopelessness through the stories she created.
—Elizabeth Rollins Epperly, Founder, L.M. Montgomery Institute, University of Prince Edward Island

The article about Prince Harry and Meghan states, “They are the biggest story on the planet” and “The appetite for [them] is voracious” (“Will we ever just leave them alone?” Royals, March 2020). It was the first news item I saw about them since news came out that they planned on moving to Canada. I have yet to hear anyone talk about them in an excited way because they have moved to this country. Most people around here are indifferent. Most people are concerned that Canadians will be stuck with paying for Harry and Meghan’s protection, which is estimated to cost around $10 million dollars per year. If that is true, how many people in need could we help with that kind of mone >I think the news media may be interested in their lives, but I do not believe the average Canadian gives a hoot about them.
—Claudine Koyich, Kitchener, Ont.