The 2014 Parliamentarians of the Year

Meet the #POTY14 award winners — as chosen by their fellow MPs 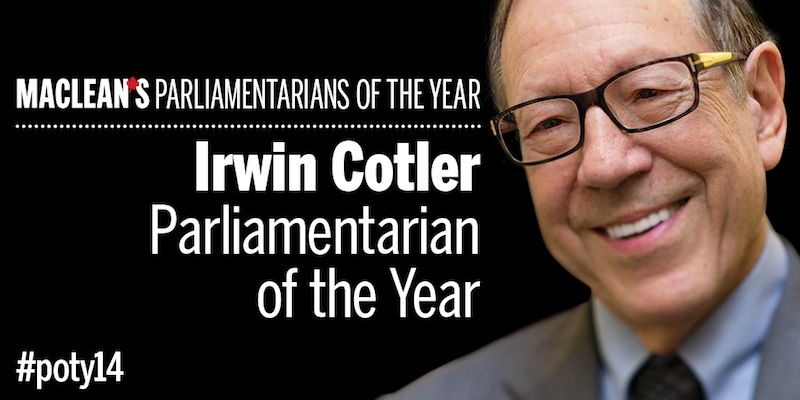 Irwin Cotler has this story about his father, about being brought to Ottawa at the age of 11 and being shown the Parliament buildings and his father turning to him and saying, “Son, this is vox populi, the voice of the people.”

That 11-year-old did not decide then and there that he would one day occupy a seat in the place of the people. That he would one day become a credit to the institution was perhaps even unlikely—at least, until the McGill law professor and defender of political prisoners finally agreed to run for the Liberals in a by-election in 1999.

Even then, he thought he’d just be in Ottawa for a year, then maybe for a full term. 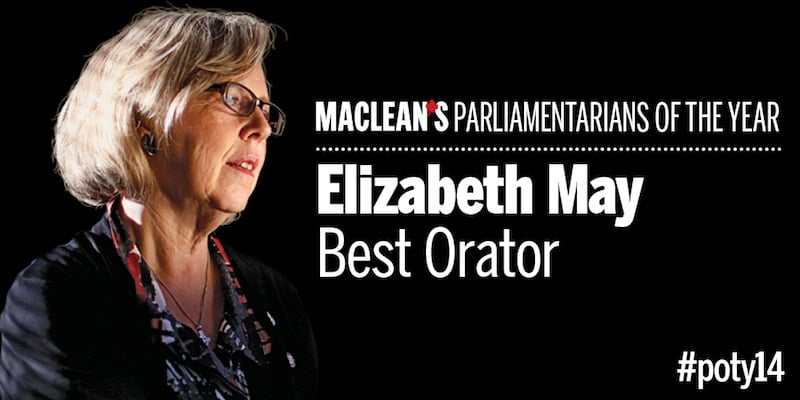 Elizabeth May doesn’t write speeches; she delivers them. That makes the Green Party leader something of an anomaly in the House of Commons, where many parliamentarians read carefully crafted remarks.

A prolific speaker, May doesn’t want her speeches to simply be recorded in Hansard. “I’m actually attempting to reach my colleagues on the Conservative benches in hopes that they’ll change their vote,” she says.

Some of those Tories will privately applaud her interventions after publicly dismissing her in the House.

May says her freewheeling approach allows her to “shift to the mood of the room.” When the House paid tribute to Sergeant-at-Arms Kevin Vickers in the wake of the Centre Block shooting on Oct. 22, May lightheartedly suggested MPs should “let him leave this place and go fly-fishing on the Miramichi,” where Vickers grew up. “The glowing tributes were wearing him down,” May recalls. “He needed to be able to put his mind somewhere else.” 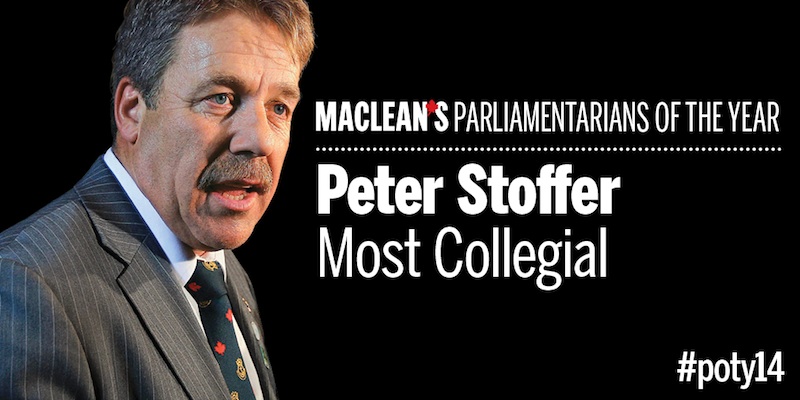 Peter Stoffer‘s first order of business when he meets anyone is to instruct them to forget his surname and, for that matter, any honorifics they might normally use in conversation with a parliamentarian. “My dad is Mr. Stoffer,” he says. “I’m just Peter.”

The long-serving New Democrat, originally from the Netherlands but now firmly entrenched in his Nova Scotia riding, is famous for just being so darn nice. He gives cabinet ministers a heads-up before question period and he jokes around with parliamentary pages. His storied corner of the Hill features a pool table and walls covered with ball caps. The rest of the opposition benches revel in the theatre of the place. They wouldn’t dare settle for a neutral exchange of questions and answers. Save for a couple of fellow office decorators—MP Ryan Leef, an MMA fighter, hangs a punching bag in his space; MP Jonathan Genest-Jourdain set up a model railroad—no one matches Stoffer’s welcoming interior.

Parliament’s nice guy was first elected in 1997. He has won five times since, and he hopes to win again. At a nomination meeting this month, the veteran New Democrat chose not to have just another party stalwart vouch for his candidacy. Instead Bill Casey, a former Conservative MP from a nearby riding, agreed to do it. “I asked him, and he said yes,” says Stoffer. Of course he did. 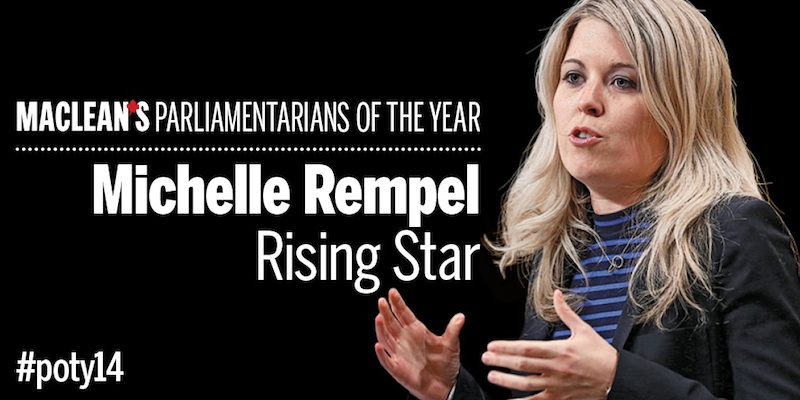 Conservative MP Michelle Rempel entered Parliament in 2011 and was immediately appointed to the post of Parliamentary Secretary for the Environment. Two years later, she was promoted to Minister of State for Western Economic Diversification, having proven herself more than capable of handling her portfolio and holding her own during Question Period.

“It’s not a learning curve, it’s a learning cliff,” Rempel says. “There are so many different facets to being a parliamentarian, but then you add on the responsibility of cabinet committee, running a department—it’s been a lot of work.”

Rempel’s work ethic entails meticulous Question Period preparation, which allows her to speak without notes. Indeed, her QP style is largely credited with vaulting her into cabinet. And her confident, often combative, voice makes her Twitter account worth following. But she’s unlikely to again Tweet anything as widely noted as this message, sent when MPs were being kept inside guarded rooms in Parliament after the Oct. 22 shooting: “Mom, I’m okay. I’m in hiding.” Even in lockdown, Rempel is heard. 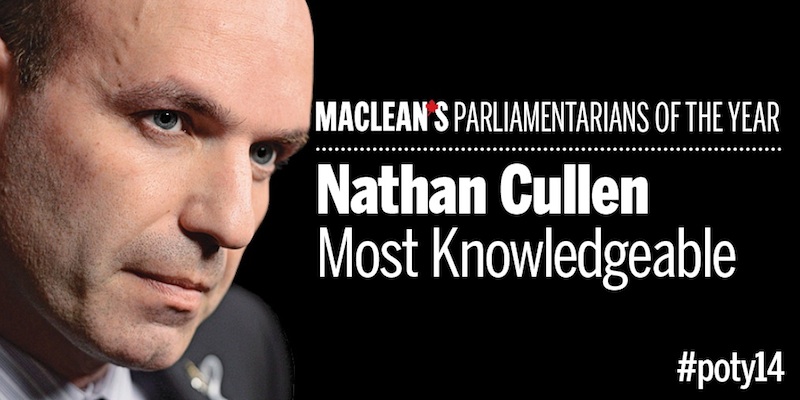 NDP MP Nathan Cullen has taken on some of his party’s most demanding roles in the past couple of years, serving as House Leader before Thomas Mulcair appointed him finance critic earlier this year.

Cullen has thrown himself into revamping the NDP’s stance on economic policy. “I like that sense of challenge in not knowing how to do a job before you start it,” says Cullen. As finance critic, Cullen says the learning curve is just at steep especially on the more technical side of financial regulation and the nuances of the economy. He takes satisfaction from being able to frame the issues of the day in a broader social context. Both roles, he says, demand attention to a blend of political strategy and policy detail.

Cullen also credits his riding in northern B.C. as giving him a perspective beyond the preoccupations of the Ottawa bubble.

“The effort has been around being an interpreter and translating either obscure procedural data or some market statistics or economic factors into something that more people can understand,” Cullen says. “It’s the general job of a politician to interpret these things that go on in the House for people.” 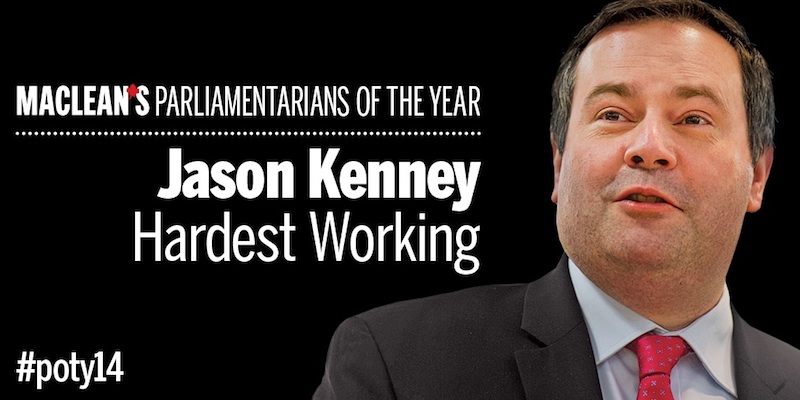 Jason Kenney’s primary title these days, Minister of Employment and Social Development, is enough to signal his importance in the Tory government: He’s the jobs minister. But that’s only the start. As Minister for Multiculturalism, Kenney serves—as he has for years—as Stephen Harper’s point man for outreach to ethnic voters. As regional minister for Southern Alberta, he’s in charge of the care and feeding of the core Conservative base in Harper’s heartland. And he chairs cabinet’s powerful operations committee, which oversees day-to-day coordination of the government’s agenda.

You might guess he’s chained to his desk. You’d be wrong. Kenney still tours the country extensively to meet with his provincial counterparts to get agreements on programs like the Canada Job Grant, and to meet (and dine) with ethnocultural communities. In Parliament Hill circles, where workaholics abound, his reputation for keeping punishing hours stands out.

Often in his office past midnight, Kenney spends some of those late hours engaging with critics over Twitter. He has long credited his ability to sleep anywhere for allowing him to put in 20-hour days whenever he needs to. To top it off, in a government known for truncated media availability, Kenney is the lone minister who routinely stretches news conferences until the last reporter’s final question is exhausted. But he, it seems, is not. 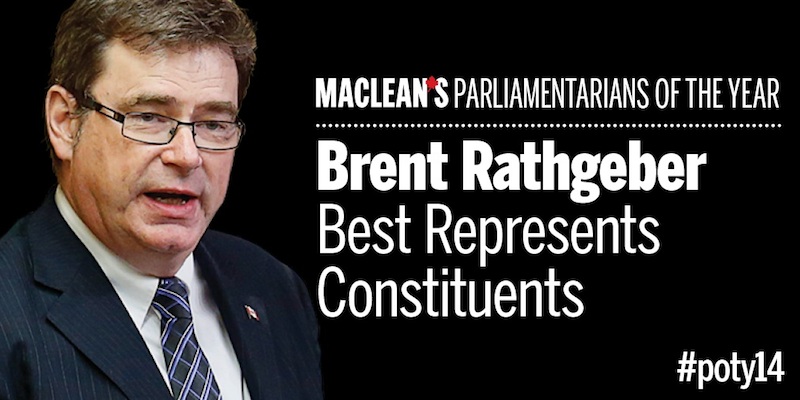 There might not be anyone in the House of Commons more interesting to watch right now than Brent Rathgeber. Ideologically he remains a conservative, but since splitting with the Tory caucus in 2013 he has become an independent MP. His interventions and votes are no longer quite so predictable and he often publicly ruminates on issues. When the House voted to authorize a military mission in Iraq, he detailed his considerations on his website, including how conflicted he was before deciding to vote yes. “I think my constituents were satisfied with that vote, especially in light of the local interviews that I gave and the blog that I wrote,” he says. “At the end of the day, they appreciate that. I can provide a nuanced opinion and set out the many pros and the many cons and explain how I came to my decision. That’s what I really see as the advantage of being an Independent.” 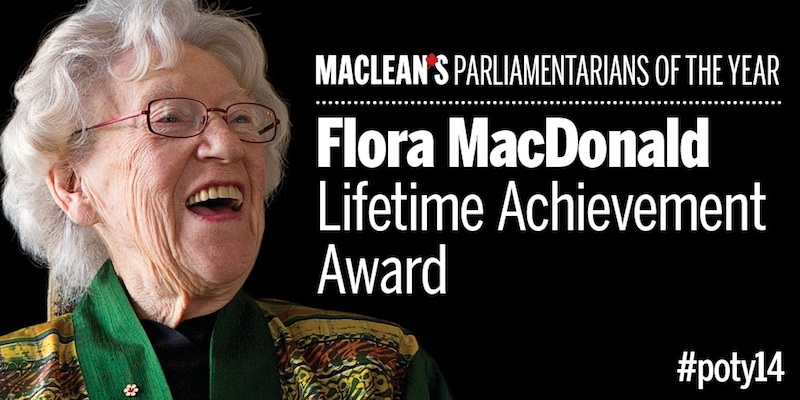 The living room window of Flora MacDonald‘s 11th-floor apartment in Ottawa affords a sweeping view of a broad curve of the Rideau Canal. Casting a weather eye over the water last week, MacDonald, 88, reminisced about skating to work on the canal when she was a cabinet minister in Brian Mulroney’s government in the 1980s. That memory, in turn, takes her back to the frozen lakes of Cape Breton Island, where she was a champion speed skater in her youth.

She brought more than a strong skating stride from her North Sydney, N.S., upbringing to her storied career in politics. MacDonald, this year’s recipient of our Lifetime Achievement Award for a former parliamentarian, says her abiding interest in world affairs was instilled in childhood. Her grandfather was a clipper ship captain who sailed around Africa and South America. Her father, who ran North Sydney’s Western Union trans-Atlantic telegraph terminus, talked to his daughter daily about the newspaper’s foreign news. “It was a much better education than I ever got in school,” she says.