Andrew Scheer's parents were frugal, but he grew up solidly middle-class

The Tory leader sets his stories of childhood without much money against Trudeau's 'vast fortune.' But the two might have quite a lot in common. 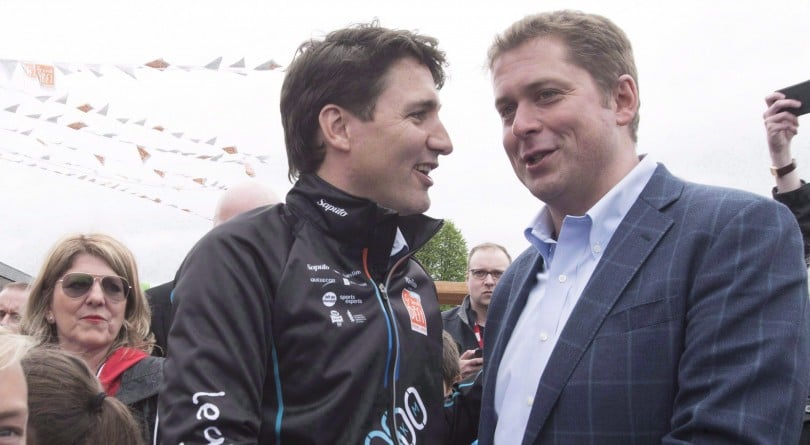 Trudeau shakes hand with Scheer at the start of the Defi Pierre Lavoie, a 1,000 km bicycle trek, on Thursday, June 14, 2018 in Saguenay Que. (THE CANADIAN PRESS/Jacques Boissinot)

Andrew Scheer rarely misses a chance to remind voters he didn’t experience anything like the glamorous upbringing of a certain other federal politician. “We didn’t have a lot of money,” the Conservative leader said in a typical section of a speech to his party’s convention in Halifax last summer. Then Scheer added, as he often does, what seems to be his favourite telling detail: “We didn’t have a car, so we had to take the bus everywhere we went.”

In a speech to the Canadian Club in Toronto in 2017, Scheer told of how, when interest rates spiked in the early 1980s, his father had to swallow his pride to hold onto the family home. “It’s not easy,” he said, “to go to a friend to ask for money to pay down the mortgage so that you can stay in the house.” He also described his parents’ response when, as an 18-year-old, he was accepted into the University of Ottawa. “They said I could live at home for free, and that was their contribution to my post-secondary education,” he said.

These formative stories add up. In a speech to his Conservative caucus the day before this winter’s parliamentary session began, Scheer drew a tight circle around his memories and the strains hard-pressed Canadians are feeling now, expressing his empathy for “parents who sit around the dinner table—like mine often did, in a townhouse in south Ottawa—stressing over how they will make it to the end of the month.”

In Canada, it’s no sign of great wealth to have a car, or to cover a mortgage without hitting up friends, or to save for your kid’s tuition, or to be free from habitual fear about whether the money will last to the end of the month. When these ordinary markers of middle-class status are out of reach, Canadians might well recognize a family that is struggling.

Yet Scheer says that’s not the impression he’s trying to convey. “When I tell those anecdotes, I do frame it in the context of, ‘we had a good life,’ ” he said in an interview. “We were able to have nice things and enjoyable moments. But it’s just a different experience from Justin Trudeau.” Which is clearly the point he’s bent on driving home, over and over, as he presents the choice voters will face in next fall’s federal election. This week in the House, he repeatedly alluded to Trudeau’s “vast family fortune.”

As almost all Canadians know, Trudeau is the son of the late former prime minister Pierre Trudeau, whose father, Charles-Emile, made money with a chain of gas stations around Montréal. Back in 2013, Justin Trudeau released documents to journalist Glen McGregor, then of the Ottawa Citizen and now with CTV, showing he had inherited $1.2 million. There’s unquestionably a wide gulf between Trudeau’s elite start and Scheer’s average-guy origins. Still, Scheer and his two sisters grew up in a solidly middle-class, two-income household.

Their father, Jim Scheer, was a proof reader, researcher and librarian from 1971 to 2008 at the Ottawa Citizen. The newspaper’s union contract shows that he would likely have been making at least $66,000 when he retired. Their mother, Mary Scheer, who died in 2017, worked for more than three decades as a registered nurse at Children’s Hospital of Eastern Ontario (CHEO). By the late 1990s—around the time her teenaged son was getting active in politics—CHEO’s contract with its nurses’ union shows an experienced RN was earning about $55,000, before overtime.

Taken together, Jim and Mary Scheer appear to have steadily earned considerably more than the median for Canadian families, which Statistics Canada says stood at $68,800 in 2003, the year Andrew Scheer moved out of their townhouse and relocated to Regina, the hometown of his future wife, Jill. As a rank newcomer in Saskatchewan, he launched his political career by winning the Regina-Qu’Appelle riding in the 2004 federal election. At just 25, Scheer was earning $141,000 as an MP; now 39, he makes $259,000 as official Opposition leader.

Despite breaking into politics so early, Scheer puts some emphasis on first taking a job in Regina at a family-owned insurance company. Asked how long that lasted, he answered that it doesn’t matter. “Whether it’s a few months or a few years, the point is the same,” he said. “Nothing was guaranteed, nothing was given to us.” Again, his aim is to show that his past bears no resemblance to Trudeau’s. “He doesn’t have a lot of points of reference for what life is actually like,” Scheer said, “and I try to put the contrast that I do.”

The carefully burnished image of a politician who is self-made and has known hard times is a time-honoured campaign-bio staple. Former U.S. president Bill Clinton once quoted a past chairman of the Democratic party, Bob Strauss, as saying “every politician wants every voter to believe he was born in a log cabin he built himself.” In Canadian politics, genuine stories of humble beginnings for big-time politicians aren’t rare, but voters tend to process the tales differently.

For instance, Jean Chrétien’s father was a paper mill machinist in Shawinigan, Que., and his lifetime of close ties to the Montréal and Ottawa political, business and legal establishment have never eclipsed Chretien’s “little guy from Shawinigan” persona. Similarly, Brian Mulroney’s father was a paper mill electrician in Baie Comeau, Que., but somehow Mulroney’s career before politics as a sharp-suited Montréal lawyer and Iron Ore Co. executive felt more definitive.

After Mulroney won the Conservative leadership in 1983, Liberals took note that he shed his business attire to campaign successfully in a Nova Scotia by-election. On Mulroney’s first day in the House as an MP, Sept. 12, 1983, then prime minister Pierre Trudeau welcomed him by noting that he was back in uniform. “The Honourable Member from Central Nova has come a long way from that log cabin in Pictou County,” Trudeau said. “I see that he has put away his rumpled trousers and old sweaters, to be brought out again at the next election.”

Scheer has also tried to make his clothes fit his story. In a video the Conservative party released in 2017, he strolled along a generic suburban pathway dressed in dad jeans and a short-sleeved plaid shirt. It didn’t go over well. At last spring’s annual press gallery dinner, he poked fun at himself by talking about having to retire that shirt. His childhood stories, however, aren’t disposable. Scheer says they’re just the way it was.

On not having a car, he doesn’t deny that another family with his own’s income might have been able to afford one. But his parents were frugal and cautious, worrying about what would happen if one of them couldn’t work—a feared setback they never faced. “There was always that thought that we would not be able to just roll with it if some things happened unless they were prudent,” Scheer said. “That was the type of person my dad was and is, always making sure that there’s a contingency fund.”

Conservative strategists see Scheer’s relatable background as an edge. There are even hints that he has resisted his speechwriters’ temptation to exaggerate. The prepared text distributed to media in advance of his speech to the Tory convention in Halifax last Aug. 24 included these lines: “Mom would buy everything second-hand so my sister could have dance lessons. So I could play baseball.” But Scheer never read those words, saying more generally about his parents from the stage, “They made lots of choices, going without for themselves, so that my sisters and I could have the things we wanted.”

His parents were more than just good earners and disciplined savers. Jim Scheer filled that little townhouse’s basement with his crowded bookshelves. He is also a devout Catholic, a deacon at his church. Andrew Scheer says his father’s way of engaging with his children on current affairs was informed by his extensive reading. “It was a lot of deep political theory and first principles,” Scheer told Maclean’s after he won the Tory leadership in 2017.

That doesn’t sound so different from how Justin Trudeau remembers his father, whose outlook was also shaped by Catholicism and reading. “We were encouraged, expected even, to know history, Catholic theology, and the basis of philosophy,” Justin Trudeau wrote, in his 2014 autobiography Common Ground. As well, like Jim Scheer, Pierre Trudeau was often described as tight with his money—“a notorious penny-pincher in private life” is how Maclean’s put it after he died in 2000.

While their fathers set stringent standards, both Scheer and Trudeau talk about their mothers as potent influences, too. Mary Scheer was active in the anti-abortion movement as a member of a pro-life nurses’ group, and in Conservative politics at the riding level both provincially and federally. Andrew Scheer released a video last year describing her as “my hero.” Margaret Trudeau was a media sensation in the 1970s, and later emerged as an outspoken advocate on mental-health issues. Talking about his famous parents to Maclean’s in 2013, Justin Trudeau said, “I’m definitely proud that I am more like my mom in many ways.”

Of course, no political strategist would see any gain in pointing out the intriguing parallels between these two sons of bookish, exacting fathers and engaged, inspiring mothers. Instead, next fall’s election is being framed, at least by Conservatives, as a choice between an out-of-touch incumbent and a challenger grounded by lived experience of tough choices.

The trappings of the good life stand out. The signs of not quite having made it can be trickier to interpret. Many Canadians can still conjure memories of Pierre Trudeau at the wheel of his Mercedes Benz roadster. Does that tell them anything, though, about his eldest son’s character? Scheer would like voters to be equally aware that his parents didn’t own a car at all. But would knowing that offer any more insight into the Conservative leader than a faded photo of a silver convertible reveals about the Prime Minister he hopes to unseat?