For the first time, three soldiers who were there Oct. 22 detail their rescue efforts 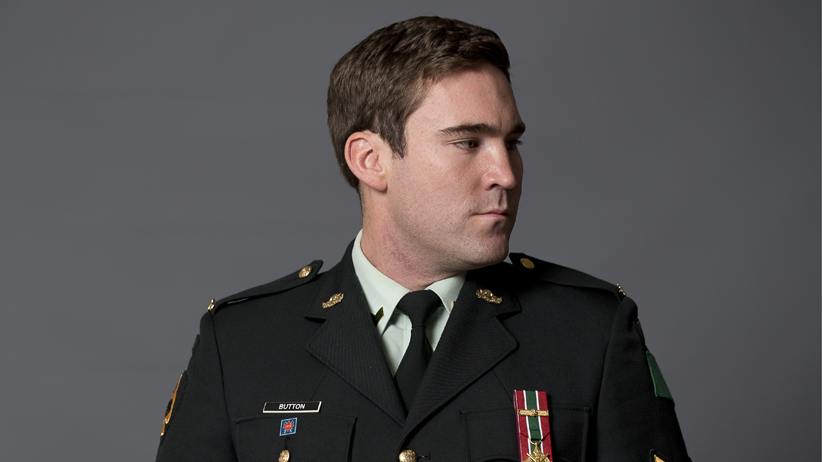 In the days after the Oct. 22 shooting at the National War Memorial, Maclean’s spoke to several bystanders who ran to try to save Cpl. Nathan Cirillo’s life. Also at the cenotaph that day was Cpl. Kyle Button, a career soldier who was the third man on duty. Button saw Michael Zehaf-Bibeau fire at Cirillo and he rushed toward the gunman. Zehaf-Bibeau then turned his gun and tried to kill Button and Cpl. Branden Stevenson, the second guard watching over the Tomb of the Unknown Soldier. Two other soldiers were by Cirillo’s side that day: Col. Conrad Mialkowski and Cpl. Anthony Wiseman, both of whom who were near the cenotaph going about their work day when they heard shots. Stevenson has not spoken to the media but, earlier this month, Button, Wiseman and Mialkowski told their stories to Maclean’s.

Related:
Bearing witness: an oral history of the Ottawa shooting
Uncovering a killer
Interactive timeline: What happened in Ottawa
Parliament Hill under siege

On Oct. 22, Cpl. Kyle Button was working at the National War Memorial. It was his job to inspect the guards’ uniforms, walk around the area, talk to people who came to pay their respects, and let the sentries know when they were due to change. It was a routine morning as the guards and piper got ready in the Plaza Barracks, a room below the cenotaph. He chatted with Cpl. Nathan Cirillo and Cpl. Branden Stevenson, reservists and best friends from Hamilton who were preparing for the 9 a.m. shift. He had only met Cirillo a week earlier. “He seemed like a really great guy.”

Button, 26, did two tours in Afghanistan and had been on ceremonial guard duty before, but it was his first time in the sentry program at the memorial. Like all soldiers, he considered it an honour.

At 9:45, Button let Cirillo and Stevenson know their shift was almost over. As he was walking around the side of the memorial, facing the guards, he saw a man come up behind Cirillo, who was on the west side of the monument, closest to Parliament. “I remember thinking, ‘What’s this guy doing? … I might have to go get rude with this person,’ because he was getting really close.”

Button saw a rifle, but thought it was a toy. “Then the first shot went off. That’s when I knew it was real.”

At 9:52, eight minutes before the end of Cirillo’s shift, the gunman fired the first of two shots from close range at the 24-year-old father.

Button noticed the shooter held his .30-30 Winchester at the hip. “He didn’t know what he was doing.” The gun looked like something out of the Wild West and had to be re-cocked after each shot, he said.

Button, who had been shot at in Afghanistan, ran toward the gunman and soldiers. The two guards carried weapons but they were not loaded.

“The second shot went off really quick—the first and second, bang-bang, real quick.” After the second shot hit Cirillo, he fell by the Tomb of the Unknown Soldier. Zehaf-Bibeau aimed his rifle at Button and Stevenson, firing between the two soldiers.

“The gunman turned towards me and Branden, and from my point of view and [with my] reaction to being shot before, I just knew I had get down, so I dove. I got up, and it was kind of blurry, but I guess he fired again.” He and Stevenson were 10 to 15 feet from the gunman when he aimed at them. Button said time stood still.

He spoke to Stevenson. “I told him to get down. I knew [the shooter] was so close he only had seconds to move anyway.” Then he told him to go below to the barracks to get help.

“I can’t recall four shots, but I’m told it was four. He fired again and I ended up on the side of the concrete on the east side of the War Memorial, and I waited there. All I could think was, because of what happened to Warrant Officer Patrice Vincent in Quebec, and because of all the threats to military personnel in Canada, I was sure that this guy was going to chase me and Branden down.”

“I waited on the east side of the memorial for him to come around and come at me, and I was going to either run at him or run around, just play this weird ring-around-the-rosie game. He never came. So I went back out and started doing first aid, called for help. I knew I had to get to Nathan as fast as possible because I know how fast people can pass from injuries like that.”

Button had first aid training and put pressure on the two wounds. “You have to stop the bleeding. You triage and you treat and you work on him like that.” 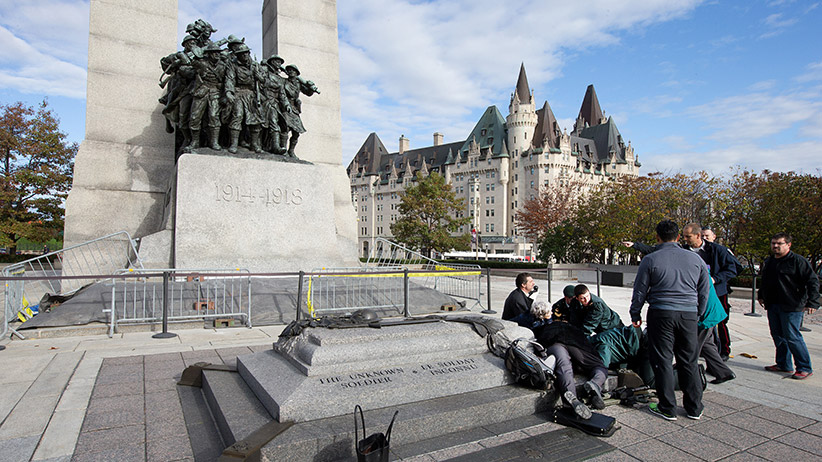 He was quickly joined by bystanders, including a nurse, a lawyer and a civil servant who were all walking by when they heard the gunshots. Button took charge, giving instructions to the others. “You can’t have lulls,” he said. “You have to keep things moving.”

At one point, he noticed people taking photos. He thought the photographers could be spotters. Button had trained for complex ambushes and, as he worked on his colleague, he weighed the possibility of other gunmen on the loose. “To me, it never made sense it was one guy who went crazy. It seemed like it was a co-ordinated terrorist attack — at the very beginning anyway.”

Some of the other soldiers from the room below came up to help with crowd control.

Two other soldiers raced to help Cirillo. By coincidence, all three had served in Afghanistan at the same time, though in different roles.

Cpl. Anthony Wiseman, 28, was at 80 Wellington St., across from the memorial and about 150 m away. Wiseman is the driver for Gen. Tom Lawson, the Chief of the Defence Staff, and his boss was in a meeting at the Langevin Block, where the Prime Minister has his office. “I heard a bang, so I just looked up. I knew they were doing construction at Parliament on the far side, so I didn’t know if it was maybe something from there, or what it was. So about three seconds go by and that’s when I [saw] Kyle on the side of the memorial. And then I saw the gunman run.”

Wiseman’s first instinct was to chase Zehaf-Bibeau, who was running toward Parliament Hill. “I got across Elgin on Wellington. He’d seen me coming. He turned toward me. He got in a vehicle, and I’d say two seconds after he got in the vehicle, I [saw] the reverse lights come on the car and the car come flying backwards.” He knew he had to get away or be run over. “I ran to the right-hand side, toward the memorial, and I had to leap over the park bench, leap over the bush, which I did not make, for the record, but I climbed out of there and I made it over [to Cirillo].”

Just before 10 a.m. that morning, Col. Conrad Mialkowski, 46, was driving by the memorial after an early appointment. He was minutes from his office.

“I was stopped at a red light when I heard the first shot. You don’t forget those sounds. It was the sound of a high-powered rifle. I had noticed some movement in my rear-view mirror because I was facing away from the cenotaph. I turned in my seat, saw the gunman, saw Kyle and Branden and I saw the gunman shoot Nathan.

“I was filled with surprise and rage … and I did a really stupid thing.”

Mialkowski did a U-turn almost directly into an oncoming bus. “He gesticulated wildly at me and fortunately he swerved to avoid me. I was going to drive up [onto the memorial area] and I was going to drive over that gunman. But as I approached closely, I realized that the design of that entire plaza doesn’t permit vehicles on it, for obvious reasons, and so at that moment I changed my mind because I saw Kyle run over to Nathan and I knew then that we had a soldier who was a casualty and he needed help, so I drove my car up onto the property of the War Memorial and ran forward.”

The soldiers and civilian bystanders tried to save Cirillo’s life but his injuries were fatal.

“I wish it could have turned out differently,” said Button. “It’s something I’ll never forget for sure, something that will follow me. There’s nothing we could have done differently.”

The day after the shooting, Button was crossing the bridge between Quebec and Ottawa to get a new uniform — the police had taken the one he was wearing at the memorial. He witnessed a two-car crash and he and the sergeant in his car rushed to help three people with concussions. They stayed until paramedics arrived.

Since Oct. 22, Button has kept in touch with Cirillo’s family and with Stevenson. He and the bystanders helping that day have shared Cirillo’s final moments in private with his mother, Kathy.