Conservatives after Scheer: the revolution eats its own

Paul Wells: The assumption among Scheer's opponents that the party could obviously do better will now be tested. Best of luck, folks. 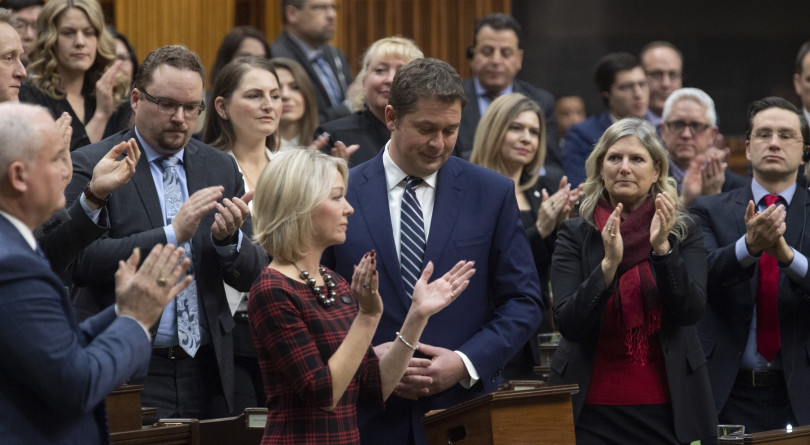 MP's applaud Scheer during his announcement that he will step down as leader, on Dec. 12, 2019 in the House of Commons (Adrian Wyld/CP)

One of the details of our current malaise is that even as the memoir, confessional and tell-all become our dominant strains of popular non-fiction, we have leaders who seem to spend a disproportionate amount of time hoping nobody will find out about them.

The social media explosion that began in perhaps 2005 has left politicians with two choices: let it all hang out, or meticulously construct a persona the public is permitted to examine only intermittently, a mosaic of staged photos, tweets and talking points. Donald Trump and the late and current Ford brothers represent the confessional mode; Andrew Scheer, who imploded today at the age of 40, did his best to pull off the persona-as-collage. It didn’t last.

There are all kinds of reasons to suspect Scheer’s brief unrewarding tenure as Conservative leader is ending because some people in his party decided it was time to pull a house down on top of him. I read Stephen Maher’s article about the revelation of Scheer’s school expenses and I think, gee, that reads exactly like the part in Preston Manning’s memoir where he recalls Stephen Harper leaking details of Sandra Manning’s expenses in the 1990s. Over here, meanwhile, is Canadian conservatism’s current national leader, Jason Kenney, with a ready-made answer when asked who should replace Scheer. How convenient. We’ll be picking over the events of the day for weeks. It all adds up to a tasty whodunit.

But Scheer’s school expenses—the jokes write themselves; you think chocolate milk is cheap in this country?—are not the only element of his life that he preferred to keep under wraps. His citizenship and the details of his education were, we found in the campaign, like a sweater that unravels when you pull a thread. So were his thoughts on homosexuality or on his faith as the context for his political action. He had answers when asked, but the answers weren’t answers in the sense that they revealed a thoughtful revelation of inner complexity; they were shields. Even most of his thinking on government policy remains a mystery. One day I may find out whether he seriously thought the climate chapter of his platform was any better than risible.

READ MORE: Scheer is out. What happens next will change Canada forever.

I barely know Andrew Scheer, but in our rare private chats he has always seemed a good and decent person. I’m sad this chapter of his life is ending this way. But I have friends who know him only from the election debates and are convinced Scheer’s a bully and a jerk, and honestly, both I and they are guessing. If you dole out your worldview through an eyedropper, you leave it to your audience to make assumptions about what’s missing. Scheer always hoped for—always assumed he deserved—the benefit of the doubt. When well-funded and experienced Conservatives decided they had already given him enough benefit of the doubt, he couldn’t compete with the image they drew of him as a stumbler. He’d left too many blank zones on the map of himself. He went before Canadians as terra nullius. His opponents filled in the blanks, and in the end his opponents were on his own side.

But you try filling in the blanks, if you think it’s easy. Conservatives’ opponents are quite sure every Conservative is the same, but in fact the party is a diverse coalition whose only successful leader, in its current incarnation, has been Stephen Harper. The years since he lost the 2015 election have been eventful. How a new leader can hold and expand the coalition is the party’s central question. The stakes are high and the challenge is daunting.

Forty-seven Conservative MPs are from Alberta and Saskatchewan. If the upcoming leadership campaign hands those MPs’ supporters a Halifax lawyer, will they think the party has pulled a fast one?

Can Toronto consultants and Saskatchewan evangelicals agree on the leader’s proper position on reproductive rights, equal marriage and Indigenous reconciliation? If the faction that ousted Scheer gets its preferred new leader, will the rest of the party stick around?

Is the towering contempt for serious climate action that greeted Mike Chong when he ran for the leadership only three years ago still a tenable position for a party that wants to make inroads in parts of the country where people insist on believing in science and the evidence of their own eyes?

These are all trick questions, in the sense that there is no single answer to all of them that will rally both a winning coalition within the party and a winning coalition among Canadian voters. I think Scheer’s astonishingly tentative defence of his position since the election made his continued leadership increasingly untenable, but the glib assumption among the leaders of the putsch against him that the party could obviously do better will now be tested, at length and under severe pressure. Best of luck, folks.

It was sadly appropriate that in the end, Scheer was brought down using the only tools the modern Conservative Party, under Harper and a generation that learned at Harper’s knee, can be said with any confidence to have mastered: attack ads, sneering disdain and targeted leaks. Scheer had no compelling story to tell about Canada. Neither did his tormentors. To me that looks like a problem. Over to you, Conservatives.