Hey, who wants a carbon-tax rebate! Trudeau's Liberals prepare to find out.

Paul Wells: Conservatives are calling the carbon tax rebate scheme a 'rip off'. Liberals say Canadians will come out ahead. Over to you, voters. 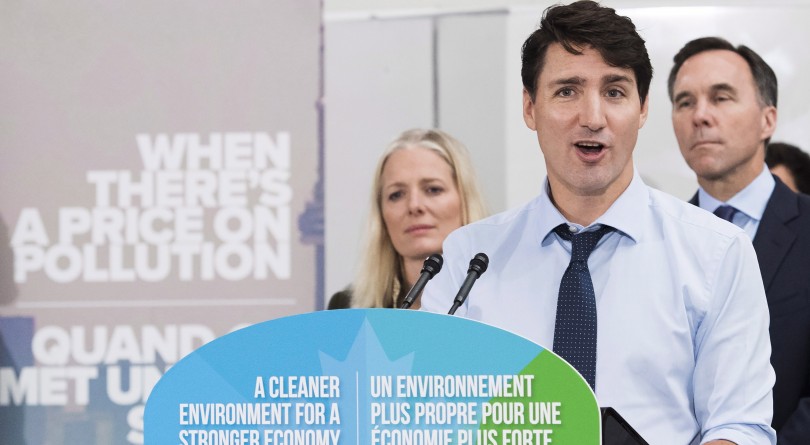 It was the kind of day where everyone was so nervous that if you stood too close to a politician, they’d start to recite talking points.

I said hello to a Liberal staffer and he started comparing the 10 years since Stéphane Dion lost the 2008 election to the 12 years we are all, as a species, said to have left before the planet’s atmosphere becomes irreparably broken. Gotta do something!, he said. No time to waste! Earth hangs in the balance!

I took my leave of the Liberal and said hello to a Conservative MP who was waiting nearby. The Conservative gave me a quick history of deficit spending in the Western hemisphere. Spoiler warning: It ends badly.

Everyone was waiting for Andrew Scheer to respond to Justin Trudeau’s announcement on a new federal carbon tax—which, every Liberal would want me to add quickly, will be accompanied by a rebate credit on year-end income taxes for residents of Ontario, Saskatchewan, Manitoba and New Brunswick.

The Liberals say the rebate will be noticeably larger than the cost of the tax for most people. My quick calculations after Scheer’s scrum suggest that’s likely to be true. (Your calculations may produce different results. I suspect we’ll hear this point litigated a thousand times over the next year, so I’m actually not overly interested in making a forceful case for my own conclusion.)

Trudeau had made his morning announcement in a media event at Humber College, which is in Ontario premier Doug Ford’s riding. While Trudeau was talking, Ford sent out a news release which suggested that the problem with Trudeau’s policy is that the best part of it, the rebate tax credit, is temporary. I’m going to quote from Ford’s news release at length, because life is too short to deny ourselves the little pleasures and because I believe Ford’s fire-breathing missive, if taxed for its carbon consumption according to the new system, would have cost him a mint:

“Let me be clear, Prime Minister Justin Trudeau does not have the right to ram a carbon tax down the throats of Ontario families and job-creators. This massive tax hike from the Federal Government will jack up the cost-of-living for each and every Ontario family and business.

“Never believe a politician who tells you he will save you money by hiking your taxes. Plain and simple, the Trudeau carbon tax will make life harder and more expensive in Ontario.

“The people of Canada are too smart to believe that Trudeau’s phony rebates are anything more than a temporary vote buying scheme that will be discarded once the election is over. In contrast, the carbon tax rip-off is forever.”

One hardly knows where to begin with that, but I’ll note two things: First, as I mentioned, Ford seems to believe the rebates will end as soon as they’re no longer useful electorally. I’m not sure why that would be the case, as there’ll be another election after next year’s, and theoretically the Liberals would like to win that one too, but the premise of the claim is that the rebates are fairly generous. Second, the tone of the whole thing suggests the tax in question is massive, and that it’s bearing down on you personally, Mr. or Ms. Canadian Taxpayer, like a Sherman tank.

By the time Scheer spoke to reporters, the message had been refined slightly. The tax was still an awful thing, one that would make everything more expensive “for the people who can least afford it.” But since Ford’s statement, the rebates had become trivial, so I guess it doesn’t matter how long they last. “Canadians are now supposed to take [Trudeau’s] word that a measly $12.50 a month will cover the true cost of his carbon tax,” Scheer said.

The thing about $12.50 is that it is measly if it is supposed to offset something huge, but it’s a perfectly decent sum if you need it to offset something, well, measlier. Using 1,173 litres as the average amount of gas a Canadian uses in a year, and figuring 10 cents a litre as the increased cost due to carbon tax, I get a monthly carbon-tax cost of less than $10. That’s way measlier than $12.50.

There will, of course, be cases where a given driver uses way more than the average amount of gas. One suspects we’ll be hearing from those people, both directly and through the mouths of Conservative MPs. The Conservatives seemed eager to join this battle, using words like “ram” and “massive” and “phoney” (misspelled, but still) and “measly.” The Liberals spoke in hushed tones about historic obligations.

We now have a year, almost to the day, before the votes of Canadians will settle the question of who has made the better case. I think more of the facts, as well as most of the political difficulty, are on the Liberals’ side. But each voter will decide.

Perhaps I may point out that it will actually be easy enough, early enough, to see how the fight is going.

Trudeau’s policy is designed to extend only to provinces whose governments have refused to design their own sufficiently vigorous emission-reduction schemes: the soon-to-be-famous holdouts, Ontario, Saskatchewan, Manitoba and New Brunswick. But it will, he says, put those provinces on a path to carbon virtue, and put the average resident of each province ahead financially. That’s quite a deal.

If it is widely perceived to be a good deal, then surely residents in the six other provinces will start to clamour for a similar bargain. Drop our local carbon-pricing mechanism, they’ll say, and hook us up to these federal rebate cheques!

And if residents of those six provinces don’t start pressing that claim, then it’ll be a long year for the Liberals.