Jody Wilson-Raybould's father: 'I think she was kicked in the teeth'

Bill Wilson: 'The reality is that with Trudeau and this government, reconciliation is more a farce than the Conservatives.' 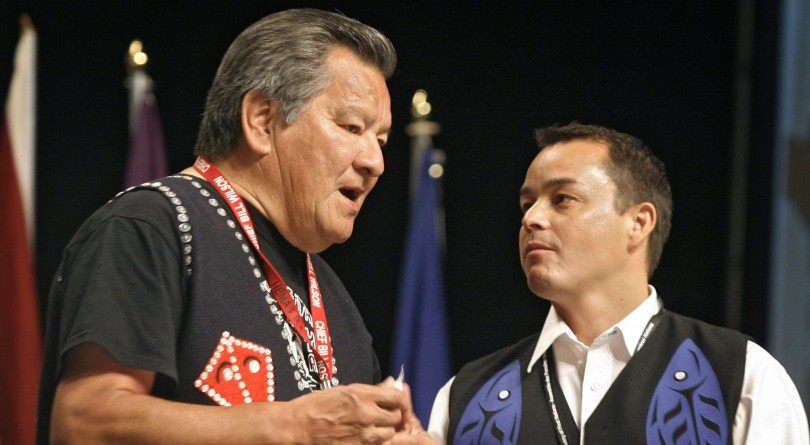 Not long after the Globe and Mail broke the story alleging that Justin Trudeau’s PMO had pressured former Justice Minister Jody Wilson-Raybould to interfere in a criminal investigation involving Montreal engineering giant SNC-Lavalin, comparisons were drawn between the former lawyer from the We Wai Kai Nation and her father, Bill Wilson. Wilson-Raybould, who was demoted to the Veterans Affairs portfolio, reportedly refused the order, reminding Canadians that she also comes from a formidable, constitutional-shaping political lineage; Wilson famously sparred with Pierre Trudeau in the 1980s. He remains strongly vocal about Indigenous issues and critical of the federal government’s commitment to reconciliation.

Last year, Wilson-Raybould told Maclean’s that she shares the same “values and beliefs” as her father. But, she said: “I would say I’m a bit more diplomatic than my father is.” Throughout his career, Wilson served as director of the Union of British Columbia Indian Chiefs, president of the United Native Nations and vice president of the Native Council of Canada. Wilson, a Musgamagw hereditary chief living in Campbell River, B.C., is now 74 and spoke with Maclean’s writer Kyle Edwards about the values Wilson-Raybould was brought up with—and why this sort of politics doesn’t surprise him.

Q: Were you surprised by all of this?

A: It was a surprise in the sense of the possible depth of what could be a scandal. It’s no surprise to us that she stood up to it. That’s the type of person she is—very strong-willed and determined. While I have never been elected at that level, I do know what goes on up there.

Q: What about the ‘scandal’ was particularly surprising to you?

A: That there would be anything like that possible at the PMO level. You hear about that kind of silliness down south. Canada has been relatively unscathed. There’s only been about three or four of those kinds of King-Byng affairs.

Q: Do you think you and Wilson-Raybould share any similarities in the way you both approach politics?

A: I don’t think we’re the same, but we were both raised on the same principles. We were both taught by my mother, and she was also taught by her mother. In fact, Jody bears one of the most prestigious names in our tribe. We’re a matriarchal tribe and she has one of my mother’s names. But we’re totally two different kinds of personalities.

If I were asked what she was asked to do, I would have refused as well. I’ve been offered many tempting bribes to take political office, big favours or big money and I’ve refused them. That’s fine with me.

Q: How are you two different?

A: She’s far more outgoing than I am—I’m a bit more reserved. She’s happy and engaging; I don’t know anybody who knows her that doesn’t like her. Whereas I’m more reticent and I don’t always trust people. Maybe I’m a little darker or cynical.

She’s gregarious, without question. She’s outgoing, beautiful and talented. It’s surprising to me that somebody would even think that she would be approachable for something like this. I like to think I had a little bit of an influence on her.

Q: To have Wilson-Raybould as the first Indigenous person in the role of Justice Minister only to be demoted to the Veterans Affairs post and then to have this story come out, what do you think that says about Ottawa’s priorities?

A: It’s the same old, same old. I spent some time in Ottawa, though not as an elected official, so it’s not a surprise that these things happen. There’s huge money involved. If you look at SNC-Lavalin, they represent the lifeblood of Montreal and the surrounding area. The outgoing [CEO]…freely admits to …[millions]… in bribe money. It seems to be the way things are done.

But if the PMO told her that she should shut up about Indian Affairs and reconciliation, now you’re really talking about the violation of one’s integrity. The reality is that with Trudeau and this government, reconciliation is more a farce than the Conservatives. They’ve been dancing around the table, just as the old man did with me.

Q: Have you spoken to Wilson-Raybould about the situation?

A: No, I have not. And I would not, unless she reached out to me. She’s sworn as a cabinet minister to not share cabinet material. I have nothing but faith in her. I know that she simply would not tolerate that kind of intervention. She was the highest-ranking law enforcement officer in the country for three and a half years. She’s not going to jeopardize her reputation for political favours.

Q: Then she was demoted.

A: I think that she was kicked in the teeth.

Q: Speaking of values, what kind was she raised with?

A: My children not only saw me growing up, they were around some of the more important leaders like Frank Calder and my mother and other heroes of the Indian business. It wasn’t my grooming at all. She’s more like her mother than she is like me. But she definitely was around the politics of our people and integrity.

The other thing is that she has a name—Puglaas, which means “a good host”—in the potlatch that signifies that she’s an honest, high-ranking person. My value system, which is obviously different than Trudeau’s, places a higher order on acceptance by the people of your integrity than allegiance to some company. She shares the values of every Canadian in terms of the rule of law, but she’s fortunate enough to have the extra teachings of a culture that’s been here for 50,000 years before people stumbled ashore.

Q: Were you supportive of her going into federal politics?

A: Certainly. I would have preferred to have had her organize at the local level because that’s where the hard work needs to be done. But I have nothing but admiration for people who can get involved and bring their talents to bear upon the political parties. She achieved both. I’m very proud of her. That’s what her goal is, that’s not what my goal was—otherwise I’d be the prime minister right now.

Q: Do you remember what you told her when she took office?

A: Be absolutely sure that nobody compromises you.

Q: It would appear that she resisted pressure from the PMO.

A: I’m not sure. Unless there is an investigation, maybe through the justice committee, we may not find out the truth. But I do know from my experience at that level, huge favours were offered to people if you accommodated yourself to Indian Affairs or any other policy. I have friends that are ambassadors in places that we’d both like to be in simply because they either kept quiet or they did something. Sadly, that’s how the system works.

I’d like to see it all come out in the wash, because I don’t have any doubt that she’ll be one of the few standing clean.

Q: Do you believe she’ll come away from this clean?

A: I believe so. I believe she could lose her career as a white politician. You don’t cross SNC-Lavalin and get away with it. I think her career could be in jeopardy, but why not? If your career is based on dishonesty, lose it. If your career hinges on integrity, then keep your integrity.

Q: Even if she’s cleared in all of this, you still think her career is in jeopardy?

A: I don’t think there’s any question about that. Look at what young Trudeau did to her—kicked her in the teeth and put her in Veterans Affairs. There is no cabinet position lower than that. He kicked her as far down in the cabinet hierarchy as you could possibly go.

The next lowest is Indian Affairs.