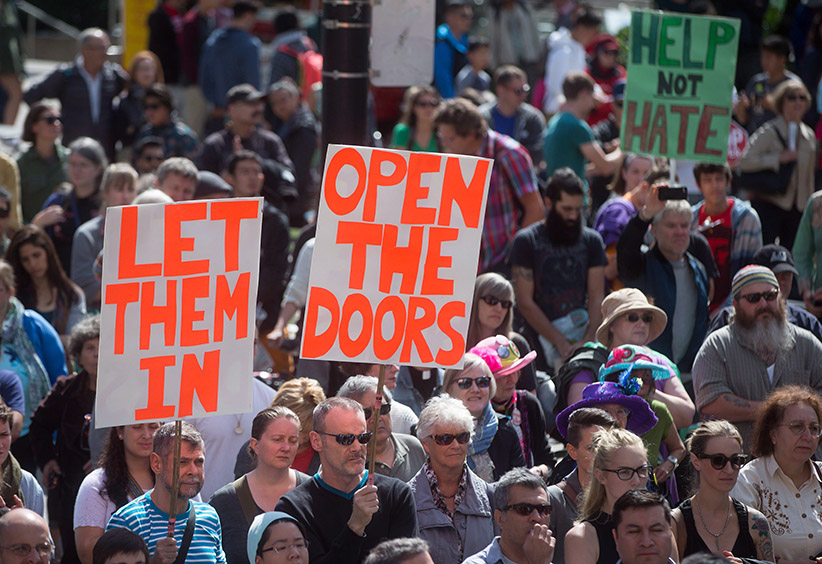 People hold signs as hundreds gather for a rally organized by the local Kurdish community to call on the Canadian government to allow more Syrian refugees into the country, in Vancouver, B.C., on Sept. 6, 2015. (DARRYL DYCK/CP)

If Justin Trudeau’s pledge to bring 25,000 Syrian and Iraqi refugees to Canada by the end of 2015 seems like a rash promise devised in the heat of an election fight, it wasn’t. The Liberal leader, now the incoming prime minister, drew attention to that ambitious target in early September on the campaign trail, after the heart-rending photo of a drowned Syrian toddler on a Turkish beach suddenly turned the refugee crisis into a pressing election issue. But Trudeau had urged the government to accept 25,000 refugees from the war-ravaged region more than five months before. It was the humanitarian counterbalance to his call for Canadian fighter jets to be withdrawn from their combat role, bombing Islamic State terrorists in Iraq and Syria.

The fact that Trudeau’s policy aim wasn’t merely an improvised response to the outpouring of sympathy for displaced Syrians after the death of little Alan Kurdi makes it even more puzzling to experts. Groups experienced with refugees tend to view ramping up the selection, transport and welcoming of that many newcomers in less than three months as extremely difficult, and maybe unwise. The promise now stands out among high-profile Liberal election promises as the hardest to fulfill on the timetable Trudeau set out during the campaign. In that respect, it’s shaping up as the first tough test of his ability to deliver, or perhaps of the country’s willingness to cut his new government some slack.

Among the top Canadian experts on refugee matters is Scott Heatherington, a former deputy director for the federal government’s refugee and humanitarian programs, who retired from the public service after serving as Canadian ambassador to Latvia, Lithuania and Estonia from 2008 to 2011. His experience in the field stretches back to selecting refugees in Indochina in the mid-1970s. Asked by Maclean’s if bringing 25,000 refugees from Syria and Iraq to Canada by year-end is possible, he said, “I think, if you want to do it badly, it’s doable; I just don’t think it’s very realistic.”

Heatherington says there are now only about 1,800 refugees from the region “in the pipeline” to come to Canada, based on commitments made by the outgoing Conservative government. The pool of Syrians forced to flee the horrific war in their country is huge: more than four million, mainly now living in neighbouring Turkey, Jordan and Lebanon. Heatherington said the first step the new government must take is to secure co-operation to meet the more ambitious target from the already hard-pressed United Nations High Commissioner for Refugees and the International Organization for Migration. “There are a lot of logistic issues where you need help,” Heatherington said. “You need to identify the people. You need to coordinate the selection on the ground. You need to do medicals. Security shouldn’t trump everything else, but it is something you need to be concerned about; you want to make sure you select the vulnerable, not the persecutors.”

As all that is happening in Turkey, Jordan and Lebanon, a parallel effort must be mounted in Canada. Heatherington said military bases have been used in the past “to kind of cushion the arrival of large numbers of people very quickly.” After that, finding homes requires more partners, particularly provincial governments and non-governmental groups. Even within the federal government, coordinating among departments that must be involved (Defence, Citizenship and Immigration, Public Safety, Employment—not to mention Finance and Treasury Board, to make new money available) will test top bureaucrats’ ability to move fast.

And all this is only to make good on the highest-profile half of the Liberal commitment: bringing in those 25,000 refugees who would be directly sponsored by Ottawa. But there is another less widely discussed part of Trudeau promise: working with private sponsors to bring in even more refugees. This is in itself a pressing matter. Ever since the Alan Kurdi photograph woke many Canadians to the urgency of the Syrians’ plight, hundreds of small groups have formed to try to sponsor refugees privately.

University of Ottawa law professor Jennifer Bond spearheads a remarkable project called the Refugee Hub, which is teaching hundreds of volunteer lawyers about the process of private sponsorship, then linking them with groups seeking free legal help. Her project began in Ottawa in early October, and she says it will roll out to cities across Canada in the next few weeks. Bond hopes the Liberals will move quickly to streamline the private sponsorship process. “It’s a real opportunity to make it easier for Canadians who are already mobilizing on this issue,” she says.

As for the promise to bring 25,000 here by the end of this year, Bond supports the goal. “Despite the fact that there will be some challenges, we, as a country, are up to it,” she says. Heatherington applauds the impetus, but is skeptical. “The commitment to do it by year-end is a catalyst,” he says. “I just don’t think it’s wise.”