Image of the Week: Trudeau and Scheer grapple once more—in a friendly way—at Hanukkah on the Hill 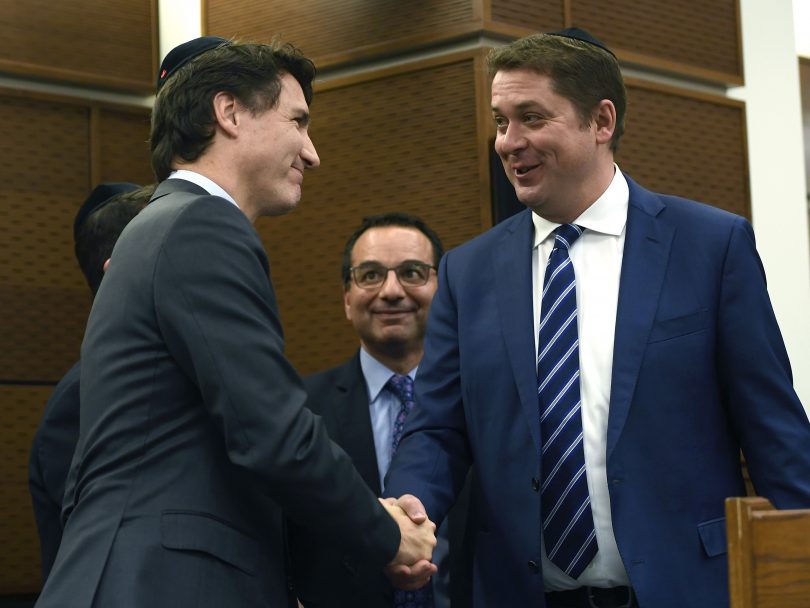 If any Canadian Jews thought tickets to synagogue for the high holidays were hard to come by, try getting into Hanukkah on the Hill. Around 100 Jewish community leaders and politicians gathered Monday for the annual candle-lighting event—held weeks before the holiday itself starts on Dec. 22—which took on a tenser tone this year. No doubt, Tory leader Andrew Schmear, er, Scheer, hassled Justin Trudeau for his government’s fakakte vote against Israel at the United Nations a few weeks back. The vote caused the Jewish community to plotz: it was the same non-binding UN resolution that pops up every year, and for more than a decade, Canada has voted against it. So, ma nishtanah—why is this year different from all others? Well, the Liberals have not-so-secretly been vying for a seat on the UN Security Council, which means they have to cozy up to the pro-Palestinian side of the UN—a real shanda for Canadian Jews. “I understand that many of you were alarmed by this decision,” Trudeau told the crowd at the Hanukkah celebration. “The government felt that it was important to reiterate its commitment to a two-states-for-two-peoples solution at a time when its prospects appear increasingly under threat.” Despite plenty of kvetching by Canadian Jewish groups, Trudeau’s government has voted alongside Israel on many resolutions since that one, falling back in line with the (surprising, to many) reality that the current Liberal government kvells over Israel almost as much as the most recent Conservative one. But that was always going to be a high bar: Stephen Harper was so feverishly pro-Israel, the country literally just opened a visitor centre named after him. Next to that, any prime minister would look like a shlemiel.

Michael Fraiman, who analyzes and comments on our Images of the Week, is a writer, editor and podcaster with the Canadian Jewish News.