Q&A: Kevin O'Leary on why he's running for the Tory leadership

The brash businessman tells Maclean's about why he's finally throwing his hat in the Tory ring, how he'll tackle Trudeau—and how good his French is

Kevin O’Leary is in. After more than a year of playing coy, the U.S.-based reality-TV star and celebrity investor announced that he was launching his campaign for the leadership of the federal Conservative party on Wednesday. He is, without a doubt, the best-known of the now 14 candidates vying to become leader of the Opposition in Ottawa. But he has zero experience in politics, and only joined the party last May. He spoke to Maclean’s about why he thinks he has the right stuff to lead Canada’s right wing.

Q: What was the determining factor in your finally making the decision to enter the race?

A: I think the straw that broke the proverbial back of the camel is when I saw that document quietly placed online from the government saying that we are going to have 38 consecutive years of deficits, ending the country in a $1.5-trillion deficit. I’ve got kids—they’re in their 20s—there’s not a chance in hell that I’m going to let Trudeau do that. That would destroy this country—there are only 36 million people. That’s insane! Now I know he doesn’t know what he is doing and I think that lots of other Canadians are coming to that stark realization. He really has misinterpreted his mandate. He didn’t deliver on jobs, and now this prospect—I call it a curse. Imagine bringing this country into a trillion-and-a-half of deficit. That’s insane. He’s got to go.

Q: Did Donald Trump’s victory influence you? Do you have a sense that Canada is also ready for some tough love?

A: Canada has always been ready for the truth. I think they actually appreciate a politician or anybody as a leader who tells the truth. I have no baggage in politics. I’ve never been a politician. I don’t owe anybody anything. I’m really looking for people who have tremendous executional skills. Look at Trudeau’s cabinet: He talked about diversity being so important in putting it together, but then I realized he never scrutinized them for executional skills. They’re all incompetent. He’s just moving them around like chess pieces from one mandate to another. And they’re going to fail again and again. The definition of leadership is that you have to find great people and ask them to do extraordinary things. I’ve been doing that my whole life. But I realize now that we’re double-screwed. We’ve got Trudeau, and we’ve got a whole bunch of incompetent people that he’s brought in for a mandate that he didn’t fully disclose to us. They don’t know what they’re doing either.

Q: You say that Justin Trudeau is ill-prepared to deal with Trump and his policies. So what’s the secret?

A: Trump has been very, very open and clear on what he’s going to do. He’s going to make the U.S. very competitive on taxes, corporate and personal. He’s eliminating policy on carbon and the regulatory environment on shale and energy and pipeline development. These are all things that we have to do and we no longer have a competitive environment to do them in. It manifests itself in the slow grind of our economy. Trudeau is now managing a 0.7 per cent growth rate and we need three per cent to be successful and maintain our educational and health mandates, our spending on military, the social net we promised Canadians. Basically, if you’re a young Canadian now and Trudeau puts this country into $1.5 trillion in debt, you will never have the opportunity that I had as a young Canadian. The skies were blue when I was coming up. I want my kids to have the same opportunity, if not better, than I had. I’m not going to let Trudeau do this. I think a lot of people are feeling the weight and stench of failure. They smell it now. This guy is not up for the job. I’m sorry.

PROFILE: Why would O’Leary even want to run? 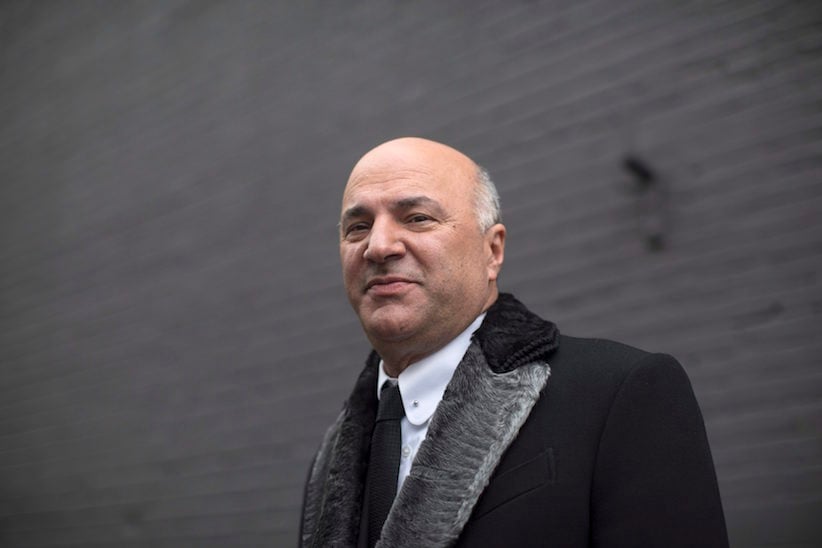 Q: You’ve spent an awful lot of time over the past year talking about Trudeau. But you’re not running against him right now. Why are you more qualified to be Tory leader than the 13 other candidates?

A: Listen, I think they all have great ideas. We’re not learning what they are because the debate format only gives them 20-second sound bites. I’m reaching 1.2 million to 1.5 million Canadians a week on social media, and another million of them today. When I start something I bring my A-game—I assume I’m going to win. I’m not worried about the leadership race. Of course, it’s important. But I’m waiting for the members to make a decision. They will look at whoever is left on May 27 and decide which one of these candidates can actually beat Trudeau. Because the truth about the membership is that they want one thing: a majority mandate. If there’s a better choice, they should go with them. I’ve been very open and transparent to the caucus. And I’ll tell you publicly what I told them privately: If I don’t deliver a majority mandate in 2019, fire me. What we’re going to have to do is get back 60 per cent of the vote between the ages of 18 and 35. I’m going to spend the majority of my time in the next 24 months doing exactly that. I won’t spend much time in Ottawa. I will be on the road and I will explain to them—policy by policy, dollar by dollar—why Trudeau is failing them. I will show them a new way and expand the mandate for the Conservative party and convince them to vote and we will get a majority.

Q: Is that the “clear path to victory” that you’ve talked about?  The strategy of reaching out to young Canadians?

A: It’s not clear, it’s the only path. You can’t win a majority mandate unless you get back 60 per cent of the votes between the ages of 18 and 35. It’s a fact. The party must decide which of the candidates can appeal to that demographic. Now, I’m very lucky. I’ve had a relationship with them for over 10 years—Shark Tank, Dragons’ Den, an entrepreneur on television. I’ve been living with them their whole lives. I’m hoping they’ll give me a chance to explain how we’re going to fix this country and to motivate them to vote for me. I’m extremely optimistic. But here’s the truth about this situation: Justin Trudeau is going to elect Kevin O’Leary. All he has to do is keep doing what he is doing.

A: Un peu. People say that I can’t speak French. C’est pas vraiment placé. I’m getting better every day. I just have to keep practising. That’s the truth. What I’m trying to do is immerse myself. [Unintelligible] chaque jour. It’s coming back slowly. But the way I’m going to do it is to ask my business associates who are completely bilingual to just speak to me in French during the day. Because I don’t want to learn “the brown cat jumped over the blue balloon,” ’cause that’s useless to me. I have to be able to converse and be prepared for a debate with Trudeau about business and the economy in 2019. That’s a more complex task. But let’s not forget, there are three languages in this country—English, French, and there’s the language of jobs. I am sure that my French will get better in the next 24 months, but I can guarantee you that Trudeau will remain illiterate in the language of jobs.

Q: In your announcement today, you claimed that Canadians will “soon spend the majority of their tax dollars” paying interest on government debt. As many people have pointed out, that isn’t even remotely true. Is it that you didn’t know that, or that you didn’t care?

A: Let me tell you something. I’m talking about the next 38 years. If you put this country into $1.5 trillion in debt and interest rates go up just 200 basis points, you cannot provide the services to 36 million people that were guaranteed to them in the social contract they have with Canada. That’s a very, very scary prospect. You can’t burden this economy with that much debt. The risk you take on is insurmountable. You have to assume for the next 50 years that rates don’t go up? That’s insane. That’s irresponsible. That’s stupid.

Q: What are you going to do about all your business interests if you win? Sell them? Put them in a blind trust?

A: I have great people working for me now. I surround myself with smart people. Trudeau hasn’t figured that one out yet.

Q: How soon would you seek a seat in the House if you win the leadership?

A: Not very soon at all. I don’t think spending time in Ottawa is a good use of my time as the leader. If we can’t get back 60 per cent of those 18- to 35-year-olds, we can’t win a majority mandate. I have to spend all my time doing that. The plan is that I’m not going to seek a seat for at least a year, maybe longer. Because I want to spend my time at colleges and universities. Wherever Trudeau goes, I will go there and explain the risks inherent in every number he puts forward and every policy he puts forward. I’m going to make sure that they understand why he’s failing them and show them a different path. That’s the whole purpose.

Q: One of your friends once told me that there was no way you were going to run because you hate winter. Do you really want to give up life in Florida for Ottawa?

A: That’s not what’s motivating me. I’m alarmed at what’s happening in the country. I’m vested here. I’m not going to leave Canada, I’m going to fix it. I’m ashamed of what has happened to it. And I’m not leaving a $1.5 trillion deficit to my kids. No chance in hell is that happening.