That time Richard Nixon predicted Justin Trudeau would be PM

The last time a Trudeau and a U.S. president met for a state dinner, it didn't go that well—but Nixon did foresee Justin Trudeau becoming prime minister 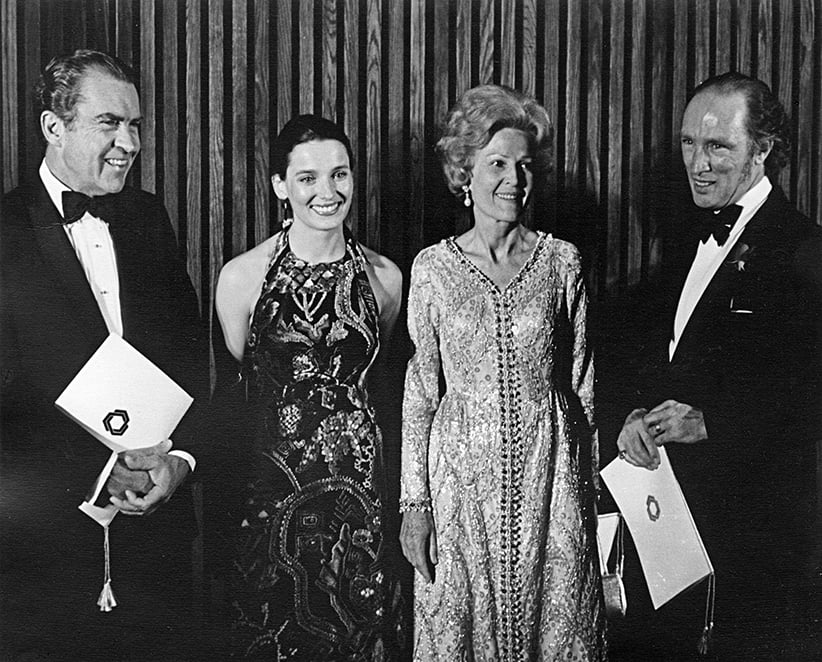 In April 1972, Adrian Macdonald and her then husband, Otto Lang, a former cabinet minister, were among the dignitaries at a black-tie gala at the National Arts Centre for president Richard Nixon’s state visit to Ottawa.

It was a glamour-filled evening hosted by Pierre and Margaret Trudeau with a lively concert by the NAC orchestra and the Festival Singers of Canada, which journalist George Radwanski (who would go on to become privacy commissioner and author of a biography on Trudeau) described in his news report as “unusually modern for a formal event of this nature.” He wrote in the Gazette: “One of their songs, entitled ‘Seller from Fortune,’ contained the clearly enunciated phrase ‘tore the ass right out of his britches.’ ”

After the show, Nixon gave a champagne toast during a buffet meal. His remarks have become known as the Nixon prophecy. “Tonight, we’ll dispense with formalities. I’d like to toast the future prime minister of Canada—to Justin Pierre Trudeau.”

To which Pierre Trudeau replied, saying should his son (who was then four months old) become prime minister one day, “I hope he has the grace and skill of the president.”

“It came true. Who knew?” jokes Macdonald, whose twins, including former CBC journalist Amanda Lang, went to primary school with Justin Trudeau. Her current husband, Donald Macdonald, another former cabinet minister, was also at the gala concert during the Nixon trip. “Trudeau has the skill but [there’s] nothing he could take from Nixon,” she says.

Marc Lalonde, Trudeau’s principal secretary in 1972, missed Nixon’s toast to the future prime minister that night, saying he must have “been busy watching after other things” but laughed at the former president’s prediction this week as Justin Trudeau headed to Washington for a state dinner. “I didn’t know Nixon had that sort of foresight to see into the future. He was a strange but remarkable man, obviously.”

As for Pierre Trudeau’s diplomatic reply, Lalonde said there was a “great deal of courtesy on each side” despite the daggers being thrown privately.

Relations between the two leaders were strained and there was no love lost. Oval Office recordings later revealed Nixon referred to Trudeau as an “asshole.”

According to Conrad Black’s book Richard M. Nixon: A Life in Full, the former president did not want to spend much time with the prime minister during the visit and found the idea, as Black described it, “unappetizing.” Black wrote that Nixon made an early exit during the gala, which was attended by an A-list of guests including Adolph William Schmidt, former United States ambassador, and former cabinet minister (and future prime minister) John Turner. The American delegation included Ron Ziegler, Nixon’s press secretary, Rosemary Woods, the president’s secretary, William Rogers, former Secretary of State, and Nixon’s national security adviser Henry Kissinger, who caused a stir by bringing Canadian broadcaster Charlotte Gobeil as his date.

Barney Danson, the former defence minister, described sitting beside Kissinger at the NAC event, along with his wife, Isobel, and U.S. foreign policy adviser Ivan Head, in his autobiography Not Bad for a Sergeant: The Memoirs of Barney Danson. He wrote that Kissinger was “confident to the point of arrogance” and noted his Canadian date was “resplendent in a deeply cut gown that exposed her considerable endowments.”

He described an “awkward” evening and state visit. “Almost all of the official Nixon party gave the impression that the whole visit was a crashing bore and that this foray into the ‘sticks’ was something that had to be endured.” He noted Nixon was “not an easy man to be with and there seemed to be no natural affinity between him and Trudeau.” Nixon seemed distracted and never relaxed, because, he assumed, things were going badly in Vietnam.

Helicopters buzzed overhead during the NAC gala and the U.S. government installed a red telephone and hotline to Washington at the president’s table during the concert, according to In Art and Politics: The History of the National Arts Centre, by Sarah Jennings (sister of the late anchorman Peter Jennings). In a section detailing the 1972 visit, she wrote: “A special hotline telephone, set up by the White House secret service, became an unexpected adornment adjacent to the silver-laden, damask-covered table when the president sat down to dinner.” The NAC still has a “Nixon room” that was used during the trip.

During his visit to Ottawa, Nixon and his wife, Pat, attended a dinner at Rideau Hall with governor general Roland Michener and his wife Norah, the night before the NAC event, and the leaders signed a multi-billion-dollar agreement to clean up the Great Lakes, despite strained relations. They also came to an agreement to resume trade negotiations.

The young Justin Trudeau altered some official plans. Margaret Trudeau missed the Nixons’ arrival at the airport to breastfeed her son. Pat Nixon brought a stuffed Snoopy toy, which she presented to Margaret during tea at 24 Sussex.

Nixon’s prophecy about Justin Trudeau gained media attention this fall, in light of his election win, but at the time it happened it was overshadowed by heavy security and politicking at the NAC function. Nixon was only at the event for about an hour, according to media reports from 1972, and his toast would not have happened if his aides had their way. His chief of staff, H.R. Haldeman, and senior aide John Ehrlichman (who went to prison for the Watergate scandal) tried to usher Nixon out of the venue before the buffet, Timothy Porteous, Trudeau’s executive assistant, told the Globe and Mail in 2002.

Porteous said Kissinger, meanwhile, was enjoying the concert with his date. “Kissinger had the right attitude. He was appalled by the way these guys were behaving. He was relaxing and having a good time while Haldeman and Ehrlichman were kind of jumping around going, ‘We’ve got to get the boss out of here.’ Kissinger said, ‘The president’s a grownup. If he wants to leave, he’ll leave.’ He was all apologies. The tension between them was quite funny,” Porteous told the Globe.

“Play it hard. Find a way, goddammit. You’ve got to put it to these people for kicking the U.S. around after what we did for that lousy son of a bitch,” he said, referring to Trudeau. “Wasting three days up there. That trip we needed like a hole in the head.”

Whether there will be any more predictions about future prime ministers or presidents when Justin Trudeau visits Ottawa this week, his state dinner with President Barack Obama will presumably be far more congenial.