The House of Commons: What, you were expecting something different?

Paul Wells: Parliamentarians settled into their news digs, where the acoustics are good and the decor—along with the MP's rhetorical material—familiar 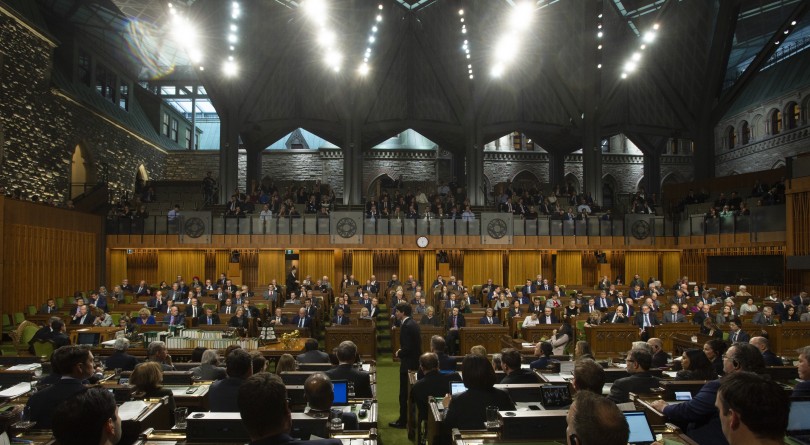 Prime Minister Justin Trudeau rises during Question Period in the House of Commons on Monday, Jan. 28, 2019. (THE CANADIAN PRESS/Adrian Wyld)

It’s not the first time the House of Commons has had to move, after all. In 1916 fire broke out in the reading room and most of the Centre Block burned down and, within weeks, the honourable members had reconvened in the Victoria Memorial Museum, at the other end of Metcalfe Street, where they would remain for three years.

My memories of the parliamentary session of 1916 are hazy, but about the class of 2019 I can report the following: there is no serious difference between the House of Commons in which MPs have worked for decades and the new place, where they gathered on Monday for an indefinite stay while the original is refurbished.

Sitting in the slightly cramped but serviceable new gallery seats, looking down onto the bickering MPs, it was hard to spot any particular difference. The carpet is still green, the curtains at the back a familiar 1960s Desilu Studios brownish-yellow. Party stars sit at the front, on the centre aisle, glowering at opponents. Rookies, trouble-makers, free thinkers, independents and leaders of plucky upstart parties sit back near the mustard curtains. Maxime Bernier and Elizabeth May were back next to the curtains. Seatmates. Somehow that never stops being funny.

Look up, though, and things get weird. The new Commons, as you’ll have heard, has been set up in the courtyard of the West Block, the next big ceremonial building over from the Centre Block. The courtyard used to be open to the sky and reserved mostly for summer beer-garden parties among political staffers. Now it’s enclosed in a translucent shell, and the new emergency backup Commons is built in a second concentric shell within the original building, connected to it by gangplanks. The view over the galleries, ghostly and modern, is very different from the original.

Sitting in the new Commons as question period loomed, I worried that an echo would make most of what anyone said incomprehensible. No such problem. The new Commons does a disservice to any MP who’s soft-spoken—anyone who speaks in conversational tones found their voice didn’t carry—but anyone who put some diaphragm into it, including most hecklers, could make themselves heard without difficulty. And as a bonus, the sound was dispersed enough that the origin of most heckles was hard to pinpoint. So I cannot tell you who shouted, “How much are your cufflinks worth?” as Finance Minister Bill Morneau rose to take a question, but I can say everyone in the room heard every word. 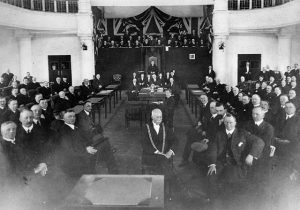 It’s not really a strange new workplace for either MPs or the journalists who are covering them. The portraits of former prime ministers have been carried with loving care from the old building. So have most of the MPs’ rhetorical material. The only thing the Conservatives bring to the table, Justin Trudeau complained in response to one of the early questions from Andrew Scheer, is “warmed-over Stephen Harper attacks.” In return, he offered warmed-over Justin Trudeau defence.

It’s been 274 days since Scheer promised a climate plan for Canadians, Trudeau said. “Where’s the plan?” When the NDP asked about big-city mayors who have come seeking emergency funding for housing, Trudeau reminded everyone of his $40 billion national housing strategy, which he announced 26 months ago and whose main feature is a housing benefit that will begin flowing in 2020.

That’s still a distant date, NDP finance critic Peter Julian said. No wonder the big-city mayors are impatient. “The big-city mayors this morning thanked me and congratulated me,” the Prime Minister replied. Across the way, Conservative MP Erin O’Toole patted himself on the back, to indicate he figured the PM was doing the same.

There were questions for Morneau on the state of public finances, and for Jane Philpott, the new Treasury Board president, ostensibly because her answers would make more sense than Morneau’s. Sensibly, given that spin, she declined to take the questions. There were questions for Chrystia Freeland about John McCallum’s brief tenure as Canada’s ambassador to Beijing. What on earth is the government’s China plan?

“Our absolute priority is the safety and security of the Canadians detained in China,” Freeland said. It’s an appropriate answer as far as it goes. With luck it will go a few weeks. Volumes of questions about what might lie beyond the release of those detainees remain unanswered. As John Turner used to say, they don’t call it Answer Period.

I could pretend to have hoped for the best as MPs settle into their new digs, which would allow me to pretend to be disappointed, but it would all be silly contrivance. They are who they are, and indeed just about anybody would be who they are if we had their jobs. The serious work of most MPs’ lives happens outside question period, and that will be true here just as it was there. Meanwhile the sightlines are clear and the acoustics are good. Nobody should ask for more.