The making of Ottawa's 'Obama Cookie,' a POTUS treat

A group of six tourists stand outside Le Moulin de Provence—a busy bakery in Ottawa’s ByWard Market. They’re on their phones, talking to each other mostly in Mandarin, besides two words: “Obama” and “cookie.”

Le Moulin de Provence sells a lot of baked goodies: doughnuts, cakes, cookies, bread, danishes, pizzas. But its claim to fame is the Obama cookie—a simple shortbread in the shape of a maple leaf, covered in red icing, with “Canada” written in white letters on top.

MORE: An Ottawan’s guide to the Three Amigos summit

The prized treats are kept in a display case on the east side of the bakery, next to a similar cookie adorned with Prime Minister Trudeau’s face, and sold in individual, commemorative tins. The case is topped with a large sign that reads “Obama Cookies.” Behind it, a giant poster with a picture of the American president giving his signature grin, holding a small bag of cookies, and flanked on either side by newspaper articles and magazine covers.

It sounds strange, right? A maple-leaf cookie named after the outgoing President of our southern friends? “The concept, when I created this cookie, was to promote the country,” says bakery owner Claude Bonnet, “to promote tourism.” That was until U.S. President Barack Obama stopped by for a visit.

Bonnet, 59 (but with the heart of a 30-year-old, he says) has been running Le Moulin de Provence for 20 years, and never in that time has anything caused more excitement than when the newly elected American President came into his shop in 2009 and bought two of what’s now called the Obama cookie. One for himself, and one for his family back at the White House.

MORE: A warm welcome in Ottawa

The legend goes something like this: It was a cold, February afternoon. Feb. 19 to be exact. Obama was on his first official visit to Canada and in Ottawa to meet his northern neighbour, Stephen Harper. He must have been getting a bit snack-ish, because on his way back to the airport, his motorcade of 10 police cars, two limousines, and two ambulances made an unannounced stop at Ottawa’s historic ByWard Market. Obama came into the bakery, much to the delight of its staff and patrons, and with a red-maple-leaf cookie in hand, said: “I love this country.”

“He was very friendly with everybody,” Bonnet recalls, “almost like a normal person. He was very enthused to be here.”

And still, over seven years later, it’s a bestseller. Before the “Obama visit,” as Bonnet calls it, he told Maclean’s the bakery would sell around 800 a month. Since then, it’s sold a steady 5,000 a month.

The second floor is where the magic happens. The elevator opens to a giant, bustling kitchen: Bakers wearing hats and hairnets, white aprons over white jackets, scurrying around holding trays, icing cookies, and scrubbing the stainless-steel counter tops. Two Japanese ladies, Hisako and Izumi, are in charge of the Obama cookies. When asked if she’s tired of it, Hisako says “never” five times. The two of them ice so many Obama cookies, they joke they dream about it. And they’re going to be dreaming about it a lot more in the coming days. The bakery is ramping up production for the North American leaders’ summit on June 29, planning to capitalize on the fact Obama is in town and Canada Day is right after. Bonnet says he has a special surprise in store for the Three Amigos summit. He won’t say what it is, but hints it has something to do with all three nations: Canada, U.S.A, and Mexico.

When the duke and duchess of Cambridge visited in 2011, Bonnet made a giant maple leaf lollipop and pistachio cookies. When Trudeau won the election last October, he made a cookie with the Prime Minister’s face and the Liberal logo on it, which now shares a case with the Obama cookie. 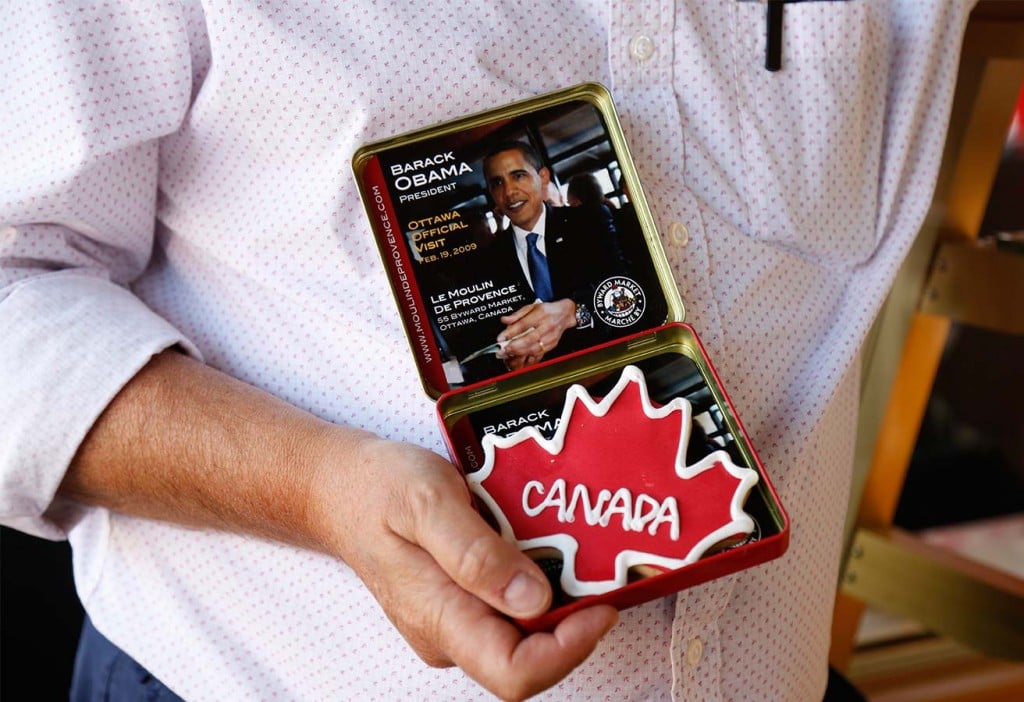 Claude Bonnet, owner of the Moulin De Provence Bakery, home of the Obama cookie, in the Byward Market in Ottawa June 24, 2016. (Photograph by Blair Gable)

Recently, Bonnet opened a new location on Metcalfe Street and Queen Street. “Nice location,” he says. “Close to the Prime Minister’s Office.” Bonnet is, after all, a businessman. He’s managed to turn a cookie the size of the palm of your hand, and an interaction that likely lasted mere minutes, into a very clever and successful marketing endeavour.

Bonnet says he’s been on walks in the market and has overheard people asking for directions to the “Obama bakery.” But he doesn’t mind that people don’t remember the name “Le Moulin de Provence.” In fact, you don’t even have to step foot in the bakery to see it’s a point of pride. Photos decorate the outside, showing the Obamas holding hands, Obama posing with people on the fateful day, a sign that reads “Obama cookies sold here.” The bakery’s website even has an entire page dedicated to “The Obama Visit.”

And if Obama decides to visit the bakery again while in Ottawa, Bonnet says he’ll first thank the President, then offer him another cookie—this time for free.