Trudeau-Ford: The next chapter in Canada's eternal campaign

Paul Wells: The Ontario Liberals (now in power in Ottawa) meet the Ontario Tories—it's the latest chapter in a nasty fight that's been going on for a decade 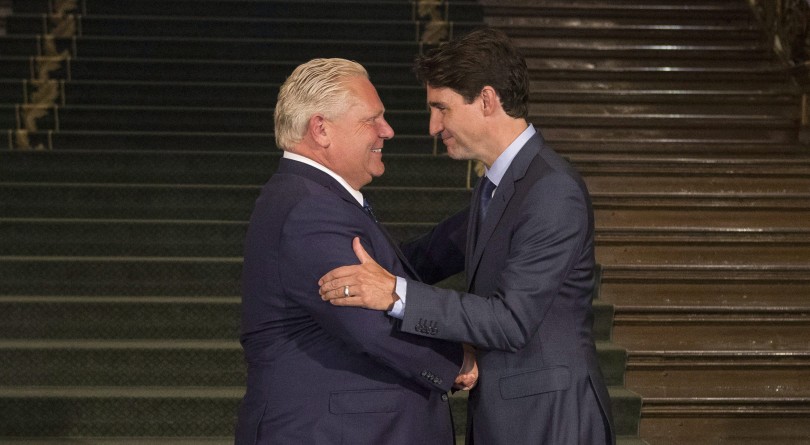 Boy, there’s a joke the young ones won’t get. Anyway. In a minute I’ll describe and interpret the extraordinary events of Thursday’s Trudeau-Ford meeting at the Ontario legislature. But let me start by saying that those events became easier for me to understand when I stopped trying to parse them as the beginning of a new relationship, and instead understood them as the latest chapter in a fight that has been going on for a decade.

At first I wrote “has been going on forever,” but that’s not actually true.

And the reason why I don’t think it’s been going on forever is that the two parties used to be better at sticking to their lanes. Jean Chrétien and Mike Harris mostly didn’t get along, when they overlapped as federal Liberal PM and Ontario Conservative Premier from 1995-2002. And it was even more visceral between their staffs. But you never got the impression of a cultural war of all against all.

Preston Manning, as federal Reform Party leader, used to try to use the presence of a government-cutting regime in Toronto as an argument against a government-growing regime in Ottawa, but the whole argument bored Harris. Chrétien would have preferred a Liberal premier in Ontario, but he couldn’t make it happen and he didn’t let it bug him. Both governments worked well together on most files. One key to lasting success in politics is the ability to recognize which fights aren’t your damned fights.

Those days are gone. I think they ended—not precisely with Stephen Harper’s election in the third year of Ontario’s McGuinty government—but rather with the decision of three once-powerful Ontario Progressive Conservatives to escape the boredom of the opposition benches at Queen’s Park and run for the Harper Conservatives: Tony Clement, Jim Flaherty and John Baird.

Once in power, Flaherty and Baird, in particular, seemed to view taking pot-shots at their old rival, Ontario’s Liberal premier Dalton McGuinty, as part of their job description. Flaherty once called McGuinty’s Ontario “the last place” anyone would want to invest, which is an asinine thing to say if you’re Canada’s federal finance minister. Imagine a leading German economic minister saying, “I don’t know what kind of moron would put money into Bavaria.”

When Kathleen Wynne succeeded McGuinty, the Ottawa-Toronto subway series between the two rival squads grew more bitter. When Wynne ran for re-election on a promise to expand Ontario’s public pensions, the Harper Conservatives called it tax cuts and they were beside themselves. When she actually won, they were even angrier.

Eventually it became clear that Harper wasn’t merely indulging his Ontario ministers in these fights; he was an active participant. I wrote this long piece at the time to try and put Harper’s Ontario obsession into perspective, but I missed a key insight from a book that hadn’t been published yet: John Ibbitson’s 2015 biography Stephen Harper, which reminded everyone that Harper lived to the age of 19 in the suburbs of Toronto. All his formative memories are from what we now call the 905. He’s at least as Ontarian as Albertan, and the Ontario he remembers is broadly identical to Doug Ford’s.

But of course this isn’t only a story about Harper Conservatives. McGuinty’s chief of staff, present at the premier’s first meeting with Harper, was Gerald Butts. Wynne’s chief of staff, Andrew Bevan, once told me that nine people who’d worked for him in Queen’s Park had gone on to hold senior jobs for ministers in Trudeau’s cabinet. Until last month, the story for the Queen’s Park Liberals was pretty rosy: Victory under McGuinty, victory under Wynne, an expansion of the franchise to Ottawa. Hudak loses, Hudak loses again, Harper loses.

It’s exactly the sort of streak that can make a team overconfident.

So when Butts and (former Queen’s Park Liberal staffer) Katie Telford joined Trudeau in Doug Ford’s office on Thursday, one wonders what they thought as they sat across the table from Ford and his principal secretary, Jenni Byrne. The last time the Trudeau team faced off against Byrne was in the 2015 election, when Byrne managed Harper’s campaign. The Liberals stomped them. Sure, Byrne and Ford just reduced the Wynne Liberals to rubble, but one gets the impression the Trudeau PMO doesn’t think that had anything to do with Liberals as such.

Early interactions between the Queen’s Park Liberals around Trudeau and the Harper Conservatives around Ford have been inconclusive. Ford and Chrystia Freeland had a really good meeting on Donald Trump’s punitive tariffs. No light showed between them. But tariffs are an easy subject. On the hardest file, Trudeau’s carbon-tax plans, the two governments have simply been talking past each other and taking potshots on Twitter. And then came Thursday’s meeting between the Prime Minister and the Premier.

There’s already been dissatisfaction, expressed both at Queen’s Park and at Toronto City Hall, over the amount of money the feds are willing to spend in Ontario for resettlement of asylum claimants. At the beginning of June, before the provincial election, federal Immigration Minister Ahmed Hussen suggested the $50 million he was providing to Ontario, Quebec and Manitoba for resettlement was “by no means a final payment.”

So there was tension there. But it escalated to near-crisis when, even as Trudeau’s motorcade was on the way to Queen’s Park for Thursday’s meeting with Ford, Ford’s office hit “send” on a communiqué declaring that he won’t spend a dime on resettlement of “illegal border crossers.” (The term has become ubiquitous in the Ford government-to-be. On Friday morning I sent an email to Ford’s office asking which statute these border crossers are breaking. I believe there is none, and have received no reply from Ford’s office suggesting otherwise.)

The communiqué blamed Trudeau for tweeting, in early 2017 in the wake of Donald Trump’s first attempt at a ban on travel into the U.S. from several countries, that “Canada will welcome you.”

I’m told by a source in the Ford camp that they gave Trudeau’s PMO no advance warning of this communiqué or of the policy position it describes. Ford basically cold-cocked his guest.

The resulting meeting was, I’m told, “super heated.” The notion that Trudeau would be at all responsible for the influx of asylum seekers was a big source of the conflict. But it’s hardly a baseless claim: in April the National Post reported ample documentary evidence that the tweet caused an uproar across the government. And Trudeau’s immigration minister, Ahmed Hussen, has worked overtime in recent months to spread a message that’s substantially different from come-one, come-all: “We do not appreciate or welcome irregular immigration,” he said in May.

One suspects there’ll be some kind of accommodation between the Trudeau and Ford governments on resettlement of asylum seekers. Hussen said, before Ford was elected, that there’d be more money than the initial offer. It won’t be a huge loss of face for Ottawa to follow through.

But plainly the same crew that spent 2014 and 2015 campaigning against Wynne from Ottawa will now spend 2018 and 2019 campaigning against Trudeau from Toronto. My gentle advice to the Trudeau gang is not to assume they will automatically win. “Conservative politicians, here and around the world, are playing a very dangerous game with something that shouldn’t be fodder for division,” Trudeau told a radio interviewer on Friday, in response to a simple factual question. If Canadians were as welcoming as Trudeau is convinced they are, his own immigration minister wouldn’t be working hard to reduce the number of asylum seekers entering the country.

It’s only a year ago that Trudeau thought he could fight another fight—on tax rules for small businesses—entirely on the terrain of values. That bad guess kicked off the worst six months of his career to date. He’d do well to remember that. Ontario’s political soul is divided, which is precisely why these two very different political families could live to feud on its soil for more than decade. Trudeau knew he was heading for a fight with Ford over carbon taxes. Turns out it won’t be the only fight, or perhaps even the most dangerous.