Why a federal #MeToo law won't be enforced any time soon

Ottawa made a big show of taking on workplace harassment. But its new legislation is full of blanks and a year and a half from coming into force. 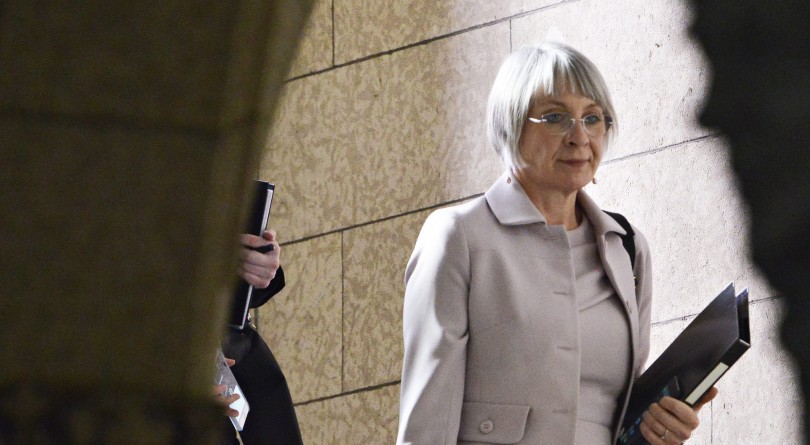 Minister of Employment, Workforce Development and Labour Patty Hajdu makes her way to the House of Commons on Parliament Hill in Ottawa on Monday, January 29, 2018. (Matthew Usherwood/CP)

With a series of loud detonations over the past few months, the #MeToo era arrived in Canadian politics. Allegations, investigations and insinuations of sexual harassment swirled. It all made the Liberal government’s push to pass new legislation covering harassment and violence in federally regulated workplaces—including Parliament Hill—feel perfectly timed.

Yet key details on how and when the updated rulebook will apply remain unclear. Individual employers—including MPs, likely under their party banners—are being left to establish some of their own policies and procedures. Other key questions will only be answered in regulations, which could take a year and a half to ﬁnalize. A new era of combatting harassment might be coming to the Hill, but it’s not arriving all that soon..

The backdrop for all this is familiar to any Canadian who follows political news even a little. This past spring, NDP Leader Jagmeet Singh kicked Saskatchewan MP Erin Weir out of his caucus after an investigator’s report found that Weir had made some women uncomfortable in social situations. Days later, Singh suspended Quebec MP Christine Moore to investigate charges she behaved inappropriately toward an army veteran she met ﬁve years ago when he testiﬁed before a House committee on which she sits. (Moore was later cleared of all inappropriate conduct by a third-party investigation.)

READ: Sexual harassment has long festered on the Hill. Now, female MPs from all parties are saying ‘enough’

Then, early this summer, Prime Minister Justin Trudeau, facing persistent questions about a fleeting, vaguely reported incident involving a female newspaper reporter at a British Columbia music festival 18 years ago, said he didn’t remember anything “untoward,” but admitted, “Often a man experiences an interaction as being benign or not inappropriate, and a woman, particularly in a professional context, can experience it differently.”

Each story had its own controversial, endlessly debatable elements. But when it comes to reforming the law around sexual harassment—especially when high-proﬁle politicians are implicated—the Liberal government seemed to be on top of developments.

Shortly before Parliament broke for the summer, the House passed Bill C-65, a package of amendments to the Canada Labour Code designed to revamp the ways workplace harassment and violence are reported and investigated. But the version sent by MPs to the Senate was amended by the upper chamber’s human rights committee, whose proposed changes the House will have to consider when Parliament resumes sitting in the fall.

All federally regulated workplaces will eventually be covered by the new rules, but Employment Minister Patty Hajdu trained the spotlight squarely on the high-proﬁle political arena. “Parliament Hill features distinct power imbalances,” she said in her main speech on the legislation, “which perpetuates a culture where people with a lot of power and prestige can use—and have used—that power to victimize the people who work so hard for us.”

Hajdu’s reforms will create new rules requiring federally regulated employers—including those in the House and Senate—to set up new systems for investigating, recording and reporting incidents of harassment and violence. She stressed that the labour code changes will encourage victims to come forward by protecting their privacy. “We know that incidents are being under-reported due to fear of reprisal and the unfair but very real stigma associated with being a victim of harassment and sexual violence,” Hajdu said.

Still, precisely how far her guarantees of conﬁdentiality can go remains open to debate. Nobody suggests that employees who complain about being harassed at work should ever be publicly named against their will. But serious questions remain concerning whether the individual facing an allegation of harassment should have a right to know who has complained.

For instance, former NDP MP Weir was not given the names of three women an independent investigator found were made uncomfortable by him in social settings. In fact, Weir said he wasn’t permitted to know about those precise incidents—only that he had spoken too long and stood too close to women at undisclosed events.

Three lawyers with long experience in workplace harassment cases told Maclean’s that under some provincial labour codes, including Ontario’s, a formal harassment investigation is highly unlikely if the person facing allegations can’t be told who is doing the complaining and about exactly what incident.

“As an investigator, I would say that that is not a transparent process, and it’s not necessarily fair to the respondent to not know the nature of the allegations and who complained against them,” says Krista Siedlak, a Toronto-based lawyer who specializes in workplace investigations, including harassment cases, with the ﬁrm Turnpenney Milne LLP.

The issue of what level of anonymity a complainant can reasonably expect—and still hope to have harassment investigated—isn’t an uncommon concern. “This comes up all the time,” says Stuart Rudner, a Toronto-based employment lawyer. “Someone makes a complaint, but they say, ‘I don’t want to be identiﬁed, I don’t want this to come out, I want you to keep it to yourself’.”

READ: Kristin Raworth: #MeToo can become a “journey to change”

Hajdu’s legislation makes no attempt to set out what will happen if a victim doesn’t want a harasser to know who has lodged the complaint. That thorny issue has been left to sort out in the drafting of regulations over the next many months. “Consultations on the regulations are currently under way where we are seeking input from stakeholders and experts on the resolution process and how to deal with situations such as when the complainant does not want his or her name disclosed,” Employment and Social Development Canada said in an emailed response to Maclean’s questions.

Another tricky situation arises when allegations are made not by the victim of harassment but by somebody else who witnessed something or just heard about it. (That’s how Weir’s behaviour came to the attention of Singh.) Federal ofﬁcials say employers, including those on Parliament Hill, will be required under the new law to follow up on this sort of third-party information.

But if the victim of the alleged harassment doesn’t want to co-operate, that complicates matters. One possibility, Hajdu’s department said, is that instead of probing the speciﬁc allegations, the employer might “conduct a hazard assessment of the workplace generally to minimize the risk of a certain type of incident from happening again.”

Much depends on the systems federally regulated employers and their employees set up themselves. The law requires them to establish procedures, including clearly setting out how an employee can report a problem. For instance, in case a victim doesn’t feel comfortable going to his or her employer, alternative people must be designated to hear complaints.

“I have heard heartbreaking experiences from staff members in this workplace and across the federal sector who do not know where to go when they have been victimized,” Hajdu said in the House. And, no matter what speciﬁc procedures are set up, the law strictly forbids any sort of reprisal against someone making a complaint of harassment or violence.

Discussion of the new law focuses largely on how complaints will be handled and how investigations by outside experts will be conducted. But Hajdu’s approach hopes full-blown investigations will be the exception rather than the rule. Her reforms emphasize prevention of harassment and violence as the top priority, and the law stipulates that informal resolution of any complaint is the preferred path. Only when all that fails will outside experts be called in to formally investigate.

For all the government’s emphasis on prevention and ﬁnding solutions informally, though, experts in the ﬁeld say outside specialists being called in to conduct formal investigations is becoming far more common in all sorts of workplaces. “I’ve been doing investigative work for the past 10 years,” Siedlak says, “and the workload in the past six months is unparalleled.”

That change, driven by the #MeToo movement, has felt rapid and decisive. The coming into force of Bill C-65 is quite another matter, with key blanks in the law still left to be ﬁlled in by regulation over the next 18 months or more. Change is coming to Parliament Hill, but at Parliament Hill’s pace.

Correction, Aug. 1, 2018: An earlier version of this story neglected to note that the Senate passed an amended version of Bill C-65, which the House will have to consider, likely in the fall. Maclean’s regrets the omission.