Image of the Week: A moment captured after the debate illustrates the one useful distinction that Tuesday's fiasco revealed 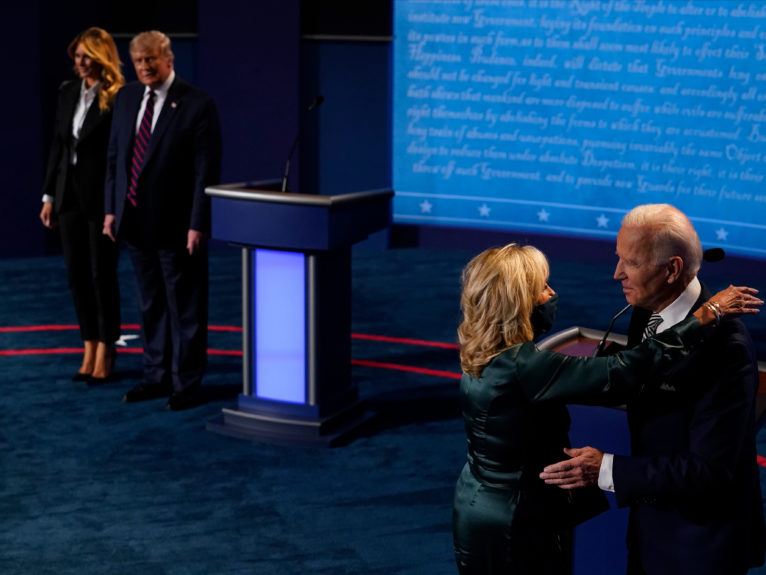 In a presidential debate that seemed perfectly at home near the end of a surreal and appalling year, Trump vs. Biden was, as one CNN correspondent aptly put it, a “sh–show“. But for all the failures it highlighted in modern American politics, the televised train wreck nonetheless underscored the fundamental difference between these two flawed candidates: compassion versus aggression. After the deaths of 200,000 Americans due to COVID-19, Joe Biden’s campaign is pushing the compassionate angle hard, attempting to coalesce anti-racism protests with the nation’s deeply flawed health-care system. Given Biden’s traumatic personal background—the death of his wife and infant daughter in 1972, and the death of his son Beau Biden in 2015—leaning into empathy makes sense. During the debate, one of his stronger moments came when he flipped Trump’s attack on his only living son, Hunter Biden, who has openly suffered from substance addiction: “My son, like a lot of people, like a lot of people you know at home, had a drug problem. He’s overtaken it. He’s fixed it, he’s worked on it and I’m proud of him.” Contrast that with Trump, who preferred to exhibit what he surely believes was unrelenting strength, but what in truth came across as classic bullying, ceaseless interruptions, petulant deflections and aggressive attacks. After the debate, the two candidates’ wives approached the podium, resulting in this image that perfectly encapsulates the distinction: one man embraces his mask-wearing wife, the other stares away from his wife in contempt of his rival.